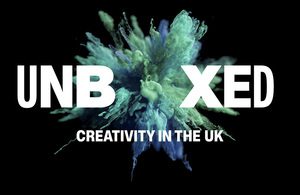 Today marks the unveiling of Unboxed: Creativity in the UK – a major festival taking place in 2022 featuring ten spectacular projects across the UK that people will be able to visit in person or experience through traditional broadcast and digital media.

Unboxed brings together some of the UK’s brightest talents in science, technology, engineering, arts and maths to work on jaw-dropping projects that will champion the nation’s creative ability, give people memorable days out and support tourism and local economies.

The festival, backed by £120 million of government funding, will touch all corners of the UK, with projects moving to different locations across the UK to reach as big an audience as possible.

Combined with the Birmingham 2022 Commonwealth Games and Her Majesty The Queen’s Platinum Jubilee, next year will be one of pride, celebration and coming together for the nation following the Covid-19 pandemic.

From the Commonwealth Games in Birmingham to the Queen’s Platinum Jubilee, 2022 is going to be a year of celebrating the UK at its best.

And today, we are launching our fantastic new festival – Unboxed: Creativity in the UK.

A celebration of UK ingenuity, energy, innovation, optimism and all-round creative genius, it will be unlike anything else that has been seen before.

Light shows, sculpture trails and a festival of ideas are just some of the spectacular events that will take place in locations across the UK – alongside work and experiences you can interact with digitally.

Next year we will celebrate creativity in all four corners of the UK in what is set to be a huge year for the nation. Everyone should have the opportunity to experience world-leading arts and culture no matter what their background or where they’re from – and that’s what Unboxed is all about.

In 2022 we’re also preparing to host the Commonwealth Games in Birmingham and mark Her Majesty The Queen’s Platinum Jubilee. Together, these events will be at the heart of a year of celebration that will showcase the best of the UK to the world.

Hundreds of creatives from across science, technology, engineering, arts and maths are creating extraordinary once-in-a-lifetime events and online experiences for millions in the UK’s biggest and most ambitious public creative programme to date.

Unboxed represents an unprecedented and timely opportunity for people to come together across the UK and beyond and take part in awe-inspiring projects that speak to who we are and explore the ideas that will define our futures.

The programme of events will also engage hundreds of thousands of school children, young people and communities throughout 2022 through school outreach and other ways to take part. There will be volunteering roles to be filled and Unboxed will create employment and training opportunities for people involved.

Unboxed will kick off in March with the incredible ‘About Us’ installation beginning in Paisley, before touring locations including Derry-Londonerry, Caernarfon, Luton and Hull. Featuring a spectacular sound and vision show, ‘About Us’ will take audiences on a journey through time and space – from the Big Bang to the present day – exploring the earth’s history and people’s connections to one another. Renowned musician Nitin Sawhney has composed a score for the show that will be performed by local choirs in host towns and cities. There will also be a UK-wide schools’ poetry and computer coding competition, launched today.

Across Scotland, the ‘Dandelion’ project will feature Unexpected Gardens, vertical farms, free music events and plant giveaways to reimagine the annual harvest festival for the 21st Century, from Caithness to Dumfries.

In Wales, ‘GALWAD’, which means ‘call’ in Welsh, is a story set thirty years in the future which will unfold across TV drama, digital platforms and live events in three Welsh locations— Blaenau Ffestiniog, Merthyr Tydfil and Swansea— over seven days.

In Northern Ireland, ‘Our Place in Space’ will be a 10km scale model sculpture trail of the solar system that has been designed by children’s author and artist Oliver Jeffers. People will be able to visit it in person in Derry-Londonderry, Belfast Divis and the Black Mountain, Cambridge and Ulster Transport Museum or through augmented reality.

‘Tour De Moon’ will be a series of festivals, satellite events and nightlife experiences inspired by the Moon. Young creative talent aged 18 to 25 will be involved in creating the programme that will include music, filmmaking and debate. It will take place across Leicester, Newcastle, Southampton and satellite events across England.

Weston-super-Mare will be home to ‘SEE MONSTER’ a decommissioned North Sea offshore platform which will be transformed into a huge public art installation on the site of the town’s disused former lido, Tropicana, in what is set to be a sensory show-stopper.

A summary of the ten projects at ‘Unboxed: Creativity in the UK’: