Get Squirrel Spotting During The Great Scottish Squirrel Survey This Month 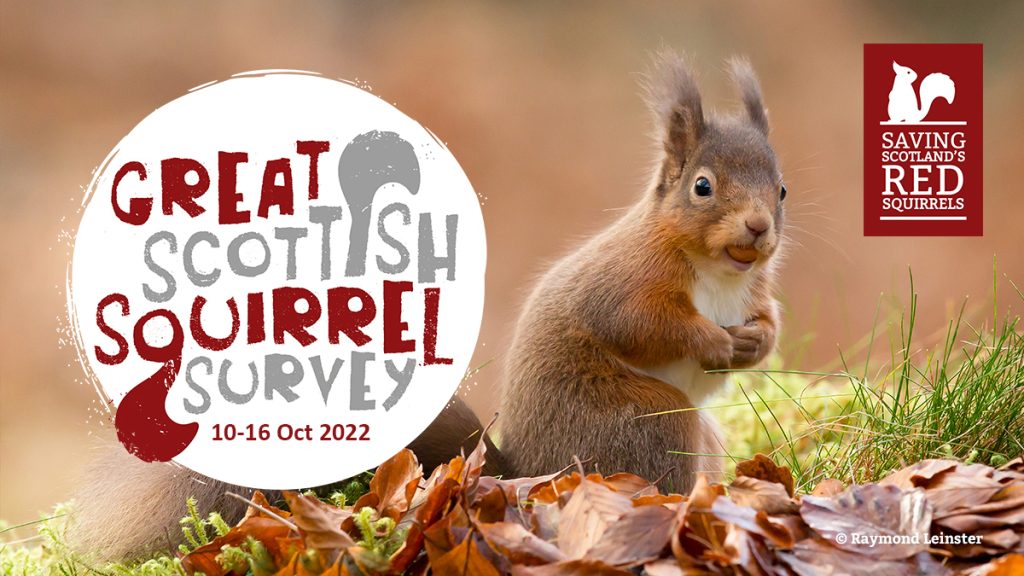 Saving Scotland’s Red Squirrels is calling on members of the public to take part in the nationwide Great Scottish Squirrel Survey now taking place between 10-16 October (National Red Squirrel Week). Now in its fourth year, the squirrel spotting campaign is hoping to build on the previous successes of this important effort.

Saving Scotland’s Red Squirrels (SSRS) is a partnership project led by the Scottish Wildlife Trust, which is working in priority areas across Scotland to protect red squirrels from the spread of the non-native grey squirrel.

This year, project partners are encouraging everyone in Scotland to go out and get squirrel spotting during Red Squirrel Awareness Week, and to add their sightings to the online map at scottishsquirrels.org.uk.

Victoria Chanin, Project Officer in South Scotland said: “Red Squirrel Week is great time to get outside for an autumnal walk. Engaging with nature in this way is very beneficial for people’s wellbeing and adding sightings of red and grey squirrels to our online map helps us to keep track of squirrel movements in Scotland.”

During times of transition and uncertainty, like those facing the nation in recent weeks, many find peace by connecting with their local wildlife and greenspaces. As we return to our normal routines and take time to reflect, the Great Scottish Squirrel Survey encourages members of the public to further explore those nature connections and get involved directly with conservation efforts happening on the ground.

Following up on a record-breaking turnout in 2020, last year’s 2021 Great Scottish Squirrel Survey saw 1549 squirrel sightings reported in just one week by nearly 1100 people across Scotland. Sightings help project staff to create a picture of the situation on the ground, and directly contribute to red squirrel conservation action. Since the end of the project’s spring surveys in 2020, the annual Great Scottish Squirrel Survey has become the most important event for getting a snapshot of the distributions of both red and grey squirrels for comparisons year to year.

Programme Manager Nicole Still said: “The public play an essential role in our work and red squirrel conservation across Scotland. The sightings data collected gives us valuable insights on how the situation with both red and grey squirrels is changing. The Great Scottish Squirrel Survey allows us to compare data between years which is really helpful in understanding the impact our efforts are having over time and where more help is needed.”

“Acting as a squirrel spotter while you are out and about and reporting a squirrel sighting is simple and means that everyone can have a part to play in conserving our iconic red squirrel.”

Eileen Stuart, Deputy Director of Nature and Climate Change at NatureScot, said: “With invasive non-native species posing one of the biggest threats to our biodiversity, NatureScot is pleased to support the Saving Scotland’s Red Squirrel project, which is successfully working to help protect the much-loved red squirrel. National Red Squirrel Week offers everyone an opportunity to get involved in this vital work while connecting with nature, and we’d encourage people to get recording their sightings and help this important project.”

Grey squirrels were introduced to Scotland in Victorian times and have since replaced our native red squirrel in many parts of the country. They out-compete reds for food and living space and can also carry squirrelpox, a virus that doesn’t harm them but is fatal to reds.

Squirrel sightings, which are collected year-round, help the National Lottery-funded SSRS project to understand how the distribution of each species is changing over time, and can also alert staff to situations where grey squirrels are posing an immediate threat to the local red population.

The Great Scottish Squirrel Survey week will feature a programme of outdoor events across the country as well as self-guided outdoor opportunities. More information can be found at scottishsquirrels.org.uk/great-scottish-squirrel-survey.