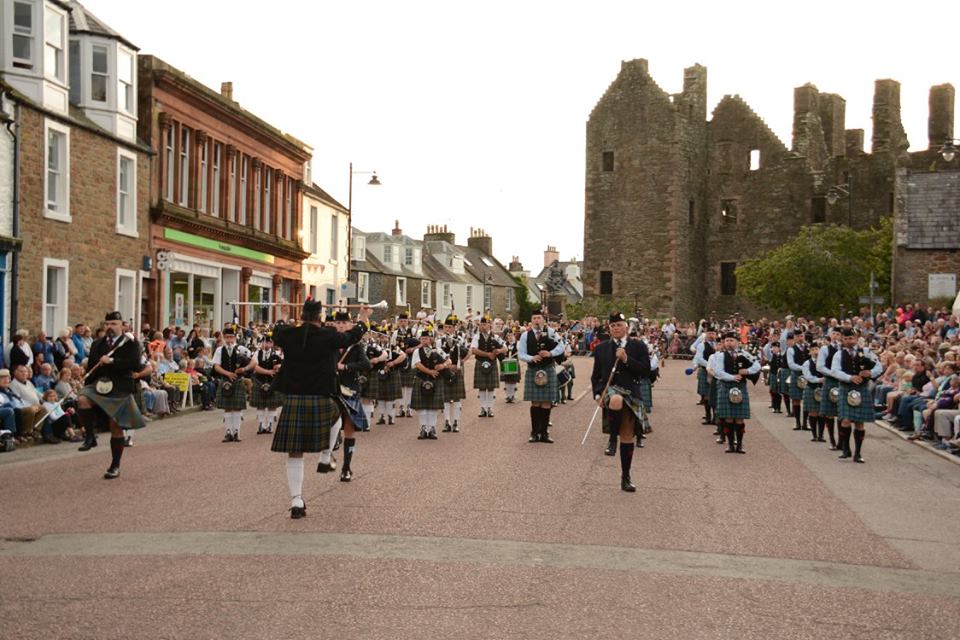 With a harbour, ruined castle, old jail and an artistic legacy, Kirkcudbright (pronounced kir-coo-bree) boasts the mysterious and intriguing past that any town in the British Isles would love to claim ownership of.

However, it’s in Dumfries and Galloway that you’ll find this pretty little gem.

Scotland’s answer to Cornwall’s St Ives, Kirkcudbright’s pastel painted houses and shop fronts provide a colourful charm to the town while there’s plenty of Victorian and Edwardian architecture to arrest the eye – the Old Jail, Broughton House and the Tolbooth, for starters.

But there’s also, of course, many secrets, legends and gossip surrounding such a centuries old town. Here are some of the strangest facts we could pull together for your entertainment.

Maybe it’s the fresh sea air or the bountiful farm land, but Britain’s oldest ever man, Billy Marshall, is said to have come from Kircudbright.

And indeed, he’s buried in the town’s Saint Cuthbert churchyard. His gravestone, inscribed with two ram’s horns and two crossed spoons, said he was 120 at the time of his death back in 1792.

Having married 17 times and fathering four children after the age of 100, this King of the Lowland Gypsies certainly managed to pack plenty of living into all those years on earth.

It’s traditional to leave coins on Billy’s Gravestone for any hungry gypsies who visit.

2. It’s a magnet for artists

Kirkcudbright is often proudly referred to by residents as The Artists Town. Certainly, the place has more than its fair share of painters, sketchers, potters, jewellery makers and other crafts folk.

It first gained this title in the late 19th century thanks to the Glasgow Boys (around 20 Glasgow trained artists) moving to the town, as well as the well-known colourists Samuel Peploe and Francis Cadell. By 1910 the Kirkcudbright Artists’ Colony had been formed. Other notable artists included Edward Hornel (more on him later) and the illustrator and ‘Glasgow Girl’ Jessie M King (whose former house has a plaque above the side door today).

The artists were all attracted to the town by its light, especially at sunset. Check it out for yourself.

3. Origin of the Belted Galloway

The popular and distinctive Belted Galloway Cow (black or brown with a white ‘belt’ around its middle) was created from four foundation herds in the early 1900s – one of which was the Boreland Herd belonging to a farmer near Kirkcudbright named Sproat.

The cattle produce the fifth most popular beef in Germany – a meat-loving nation – which appreciates hay and grass-fed cattle without the use of antibiotics or other concentrates. Because of their diet the meat from the cows is high in health-giving Omega 3 oils.

4. There’s a Japanese garden in its heart

The Kirkcudbright born artist E A Hornel (1864–1933) brought a touch of the Far East to the town when he created a Japanese Garden at his home, known as Broughton House, in the heart of Kirkcudbright town back in 1901.

Both the house and the garden – created to remind him of 18 months spent in Japan are regarded as important visitor attractions for the town.

Local Scottish stones, such as a small concrete trough, curling stones and an early wayside cross are mixed with pink Japanese flowers, dwarf pines, a lily pond and stepping stones.

There is even a grove of cherry trees and white magnolias to represent the Oriental influence. Many experts believe his art suffered as the painter turned his creative interests to his garden instead.

The house itself, in traditional Georgian architecture, displays Hornel’s paintings and has another unusual claim to fame – it’s one of the world’s largest collections of the works of Scots poet Robert Burns.

5. The ‘father of the American Navy’ was held in the town’s jail

Scot John Paul Jones, often referred to as ‘the father of the American Navy’ was held in the town’s Tolbooth prison for a time after landing at Kirkcudbright Bay during the War of Independence and stealing the Earl of Selkirk’s silver.

He was brought up in poverty but his sailing skills saw him move up the ranks in his career until he became captain of two ships and eventually a respected figure in the American Navy.

The Toolbooth in which he was held was made into an Arts Centre in 1993.

6. The backdrop to famous films and TV

Even if you’ve never been to Kirkcudbright before you may be forgiven for experiencing a touch of déjà vu on your first visit.

That’s because the town has played the backdrop to several famous films in recent years, probably the most famous of which being the rather chilling Wicker Man in 1973. Although the film was supposed to be set on an isolated island, it was actually Kirkcudbright where many of the scenes were shot.

Other films which used Kirkcudbright as a backdrop included Five Red Herrings in 1975 and an adaptation of Ibsen’s play An Enemy of the People – both for the BBC.

The Siller (Silver) Gun, was presented to the winner of a shooting competition in the town back in 1587. It was said to have been donated by none other than King James VI, who wanted to encourage the males in the town to learn to shoot in order to protect themselves from raids by the English.

The ‘gun’ trophy appeared as guns began to take over from bows and arrows and weapons. The trophy is brought out and fought for on important occasions such as a Royal Wedding.

Born in Kirkcudbright in 1888, Cecil Frederick Coles won a scholarship to the Royal College of Music then went on to Edinburgh University and Stuttgart Conservatory.

He was friends with ‘The Planets’ composer Gustav Holst and has a promising career ahead of him until he was killed by sniper fire during World War One in 1918.

Castle McLellan is the name of the ruined fortified manor house/castle in the town and which has today become famous in the culinary world as the UK’s top branded pate.

In fact, so popular is the spread that last year the owners showed off a £5 million expansion for the factory.

The pate, which began production in Kirkcudbright in 1983, is sold in high street stores and giant supermarkets such as Marks & Spencer, Tesco, Waitrose and Sainsbury.

The Brolly parade takes place each June and involves a collection of jazz musicians getting together to play which marching in the streets of Kirkcudbright.

In case of rain, a collection of Brolly Dollies will be on hand to make sure the rain doesn’t ruin either the instruments or the moods of the musicians – whichever is the more sensitive.

The parade – which is followed by a free concert – is part of the annual Jazz Festival, which this year celebrates its 20 year in the town. Other ‘events’ include the Jazz Dine-Around which gives diners the opportunity to eat in a local restaurant while being serenaded by a bunch of popular musicians. Why wouldn’t you?
So, what else would you like to know about Kirkcudbright folks?[/vc_column_text]

So there you have it. A little all rounder tour of Kirkcudbright.

We know there must be endless other facts about the town and please feel free to add any more in the comments below.