Stop by the National Trust for Scotland’s Threave Garden in Dumfries and Galloway soon to see one of Scotland’s best daffodil displays.

The south-west garden boasts over 200 cultivars of daffodil to see, many of which were planted by Major Gordon in the early 20th century (from 1925 to 1957).

The star of the stunning daffodil bank are the thousands of Narcissus ‘Southern Gem’, which was first recorded pre-1913 and is now rare. Many other species are planted throughout the woodland areas, beds and lawns. There are miniatures, tall daffodils, all sorts of colour combinations, single-flowered, double-flowered, multi-headed cultivars flowering from February through to May.

Three daffodil trails have been created for visitors to follow:

All three trails show labelled daffodils, with the emphasis on heritage cultivars many of them planted by Major Gordon before the National Trust for Scotland took over the property and garden. Some of the more recent introductions are also included in the trails. Visitors can collect a trail leaflet from the visitor centre for each of the trails, which includes a map for them to follow, along with a photograph of each cultivar.

Brian Corr, Head Gardener at Threave garden said: “We are delighted we are now able to inform the visiting public about our living national collection of daffodils through the trail leaflets. It’s been a long project and one which we hope visitors will enjoy.” 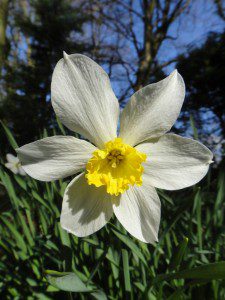 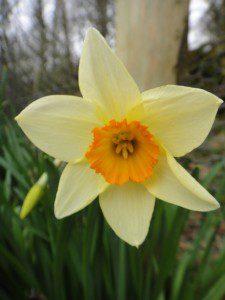 Narcissus ‘Croesus’
Narcissus ‘Croesus’ has light-yellow perianth segments with a shallow, deeply-ribbed orange corona. It’s year of first flowering was recorded pre-1912 and it was first planted at Threave in 1935. It can be found in both the Kelton Wood and the Arboretum Trails. 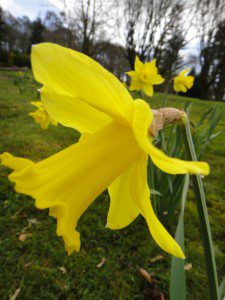 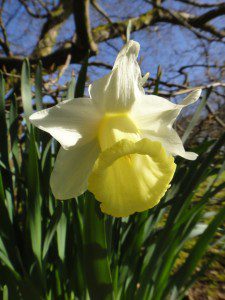 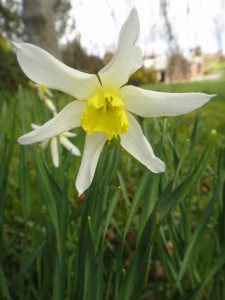 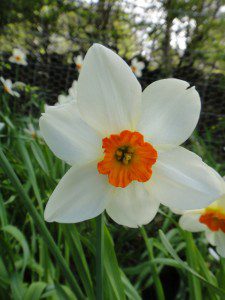 Narcissus ‘Pera’
Narcissus ‘Pera’ has pure white perianth segments, with an almost disc-shaped, ribbed, deep-red wavy-mouthed corona. Its first flowering was recorded around 1927 and it was planted at Threave before 1960. It can be found in the Arboretum Trail. 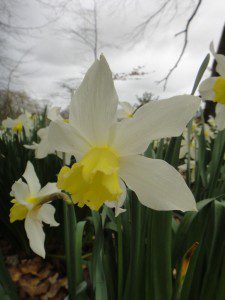 Narcissus ‘Southern Gem’
Narcissus ‘Southern Gem’ has milk-white perianth segments with a corona cup that opens a rich primrose yellow and fades to a yellow-white over time. The flowers appear shy as they face downwards. N. ‘Southern Gem’ was bred by P.D. Williams in Cornwall pre-1913 and the first 500 bulbs were planted at Threave in 1927. This daffodil can be found throughout the garden, but it is also the star of the Daffodil Bank. 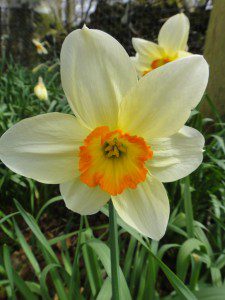 Narcissus ‘Therapia’
Narcissus ‘Therapia’ is a mid-season daffodil, with a first flowering date recorded around 1922 and planted at Threave pre-1960. It has a very distinctive disc-shaped corona which is a broad, ribbed, bright-yellow with a broad band of orange at the rim, along with white perianth segments flushed with yellow. It can be found in the Arboretum Trail. 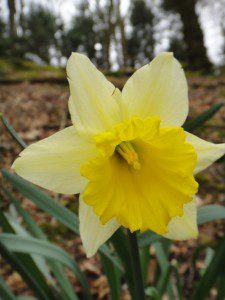 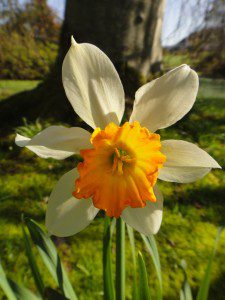