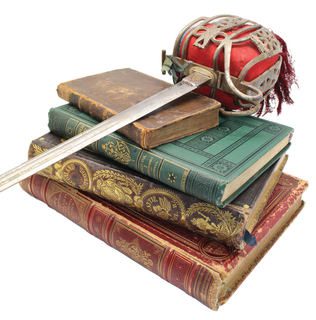 “The Sword in the Story” is a new exhibition which opens at Dumfries Museum on Saturday 22 April 2017. It has been inspired by a mystery sword that may have belonged to the infamous 16th century border reiver Kinmont Willie Armstrong. 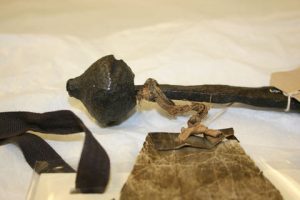 Museum staff are working with independent scholar Dr Valentina Bold, and a host of experts, to research the sword and find out more about how it came to be in the museum collection. Based on initial studies, Dr Bold has been awarded funding from The Society of Antiquaries of Scotland to continue this research.

The museum is also exhibiting a selection of swords associated with famous local characters and with different eras and cultures. These include a bronze age sword found near Lockerbie, a medieval sword found in the Lochar Moss and others that belonged to the poet Robert Burns and arctic explorer Sir John Ross.

Dr Valentina Bold said: “We know Kinmont Willie best through the reiving ballad that describes his capture and jailbreak from Carlisle Castle. The ballad was first written down by Sir Walter Scott in 1802 but this was probably a very romanticised version of events. I have been delving into the papers written at the time of Willie’s capture and he really was a nasty piece of work! I will be continuing my research to see if we can find evidence for a sword, belonging to Willie, passing down from the 16th century to end up in the museum collection.”

Councillor Tom McAughtrie, Chair of Communities Committee said: “Everyone loves a good mystery! This exhibition shows the research that goes on behind the scenes at our local museums to bring our collections and local heritage to life.”

The “Sword in the Story” exhibition is being launched on Friday 21 April at a special event starting at 6.30pm. There will be short talks from some of the people involved in researching the sword and the exhibition will officially be opened by Fiona Armstrong, Lady MacGregor of MacGregor, British television journalist and Lord Lieutenant of Dumfriesshire. Refreshments will be served and there will be an opportunity to view the exhibition.

Supported by the Holywood Trust, Dr Valentina Bold will also be giving a Royal Society of Edinburgh outreach lecture at Dumfries Museum on Thursday 11 May starting at 6.30pm and chaired by Professor Ted Cowan.

Entry to both of these events is free and open to all but please call Dumfries Museum on 01387 253374 to book a place.

During an audit of Annan Museum collection in 2015 a mysterious one metre long sword blade was uncovered. Partially corroded and with its hilt missing, the faded handwriting on the attached label hinted of an association between the sword and “freebooter” Kinmont Willie.

Kinmont Willie was notorious for his bloodthirsty raids in the borders during the late 16th and early 17th centuries. He banded together members of his own Armstrong clan with other families and to plunder cattle, leaving death and destruction in his wake. In a turbulent time he was a most “wanted” man. However, when Willie was finally arrested and dragged off to Carlisle Castle his capture was deemed unlawful as it had taken place on a day of truce across the Scottish, English border. Appeals for his release were denied and his supporter, the “Bold Buccleuch”, gathered a band of men and sprung Willie out of jail.

The escape of Kinmont Willie from Carlisle Castle is remembered in a reiving balled first written down by Sir Walter Scott in 1802 but is also referred to in various letters written at the time. Some of these were published in; “The Border Papers, Calendar of letters and papers relating to the affairs of the Borders of England and Scotland”, by H.M. General Register House in 1896 and are now available on line at https://archive.org/details/borderpaperscale02grea