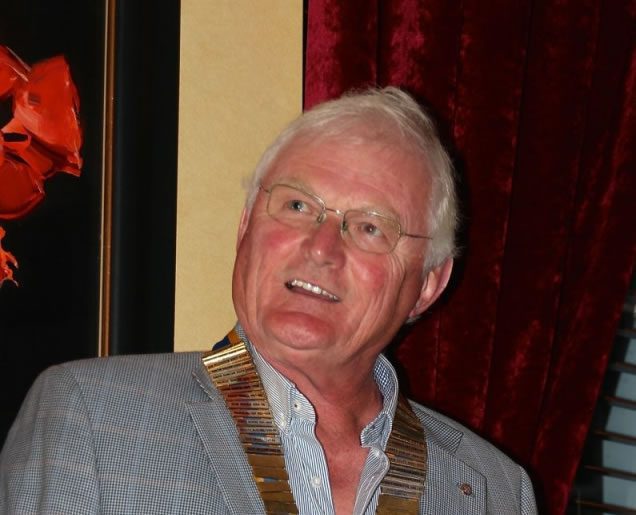 The end of another Rotary year. Our outgoing President Dr John Locke admitted it would probably bring tears to the eyes of his many fans who looked forward weekly to seeing his press photographs in the local media. However, things have to move on.

The sun did not quite shine, as in the past week but the rain held off, allowing a very tasty outdoor BBQ to take place at the Selkirk Arms Hotel, where the staff provided an excellent service.

We shared the evening with the ladies of the Inner Wheel, where their outgoing President Sheila MacLaine handed over the Chain of Office to their incoming President for 2014-2015 Sheila Martin.

Jean Best then graciously accepted the position of Vice President for the coming year.

It was then the moment of truth….when the “has been” and the “not quite yet has been” stood before the assembled crowd. John made a moving speech thanking all his convenors and (almost) everyone for their tremendous support throughout his year in office, and how much his fans would miss him.
He then turned to our incoming President for the year 2014-2015 – Dr Colin MacLaine and ceremoniously placed the Rotary President Chain of Office on the man nominated to lead us for the coming year. A very popular nominee, Colin looks forward to the challenge ahead, and to work closely with his team, while supporting International Rotary causes, to enhance our involvement locally with the less advantaged.

Ivor who has served the Club as Secretary for the past five years, in a most enthusiastic and professional manner, handed over this position to Peter Wimbush. (A move from ducks to docs)