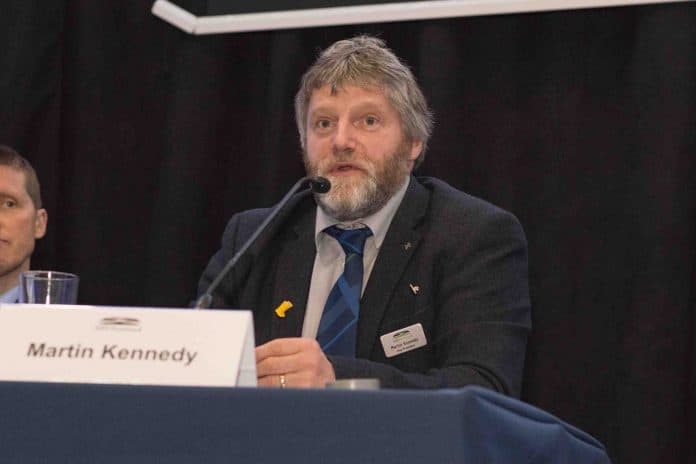 NFU Scotland President Martin Kennedy has urged farmers and crofters to respond directly to damaging Defra proposals on animal transport ahead of the 25 February deadline.

The impractical changes proposed by Defra have caused considerable anger and consternation amongst all involved in the livestock industry across Scotland, particularly those in remote areas and the Northern and Western Isles where essential livestock movements inevitably involve longer journey times often including shipment of live animals by sea. This concern saw more than 300 people logging in to NFUS webinars in January to discuss the Defra proposals and a separate Scottish Government consultation – which closes on 26 February – on animal transport.

A recording of the webinar and links to the two different animal transport consultations are available to view on a dedicated section of the NFU Scotland website at: https://www.nfus.org.uk/animal-transport-in-scotland–have-your-say.aspx

In practice, because many journeys are cross border and hauliers will require livestock transporters to operate across the whole of the UK, differences in requirements between home nations would be impractical and it is essential that appropriate standards, set by people familiar with farming practice in all parts of the country, are adopted countrywide.

In a video message to members, to be posted on the Union’s Facebook page today (22 February), Mr Kennedy urges all members to visit the consultation page on the Defra website in the next few days and make their views known.

Mr Kennedy added: “The DEFRA proposals, if adopted, would lead to huge disruption and cost to the industry. It would threaten the continuation of livestock production in island and remote communities which are heavily dependent on it economically, socially and for maintaining the natural environment.

“Basing the decision on whether a journey can take place on outside temperature or sea wind force are simplistic and impractical and fail to recognise the disruption and animal welfare issues that would arise from such an overly simplistic approach.

“NFUS will submit members views to both consultations but, in addition to Union activity, it is essential that individual members respond to the consultations if we are to achieve a workable long-term outcome appropriate for both our businesses and our livestock.

“We need your assistance to ensure that decision-makers fully understand the deep flaws and errors in these proposals.”