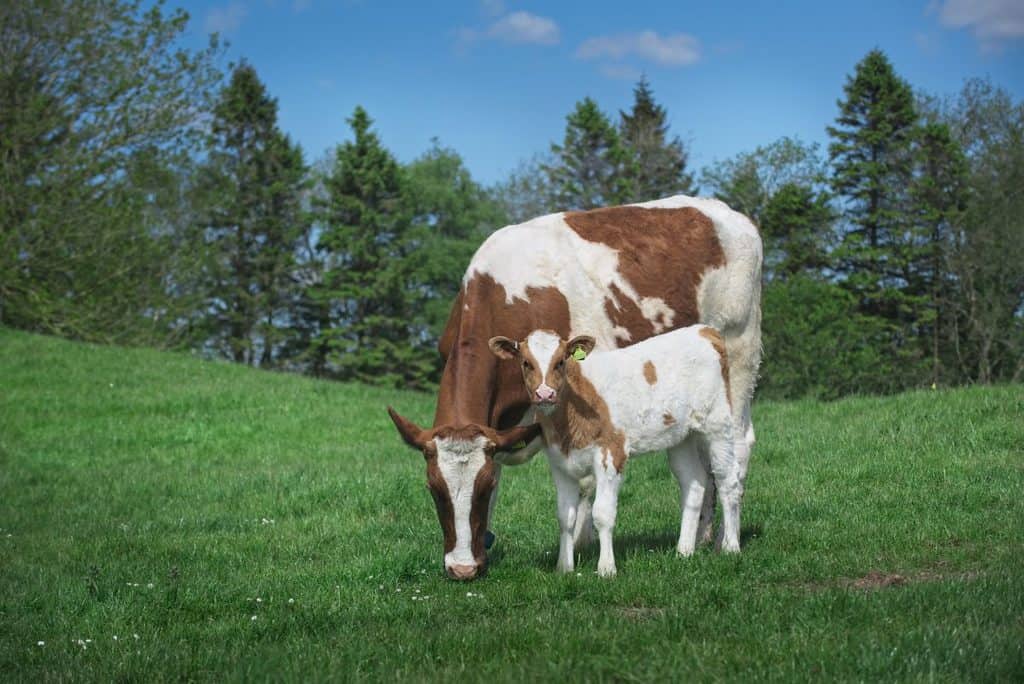 A three year pilot by an organic dairy farm to test a radical new approach to dairy farming has concluded. Rainton Farm, Gatehouse of Fleet  in Dumfries and Galloway , run by David and Wilma Finlay, has now committed to continuing with their cow with calf dairy farming system permanently after being satisfied of the long term financial and environmental viability of the approach.

In conventional dairy farming calves are removed from their mothers, usually within 24 hours of birth, and are reared separately. At Rainton Farm, whose products are marketed as The Ethical Dairy, the calves are reared by their mums till five to six months of age. During this time they can suckle, develop maternal bonds and express natural behaviour.

“We have been working towards this system for more than a decade, and in late 2016 we gave ourselves a three year deadline to either prove it could work or to quit.  Cow with calf dairy farming has been done on a small scale before, but to the best of our knowledge we are the first dairy farm in the world to make this work at a family farm scale. It hasn’t been easy, but it has been worth it.

“Three years in I can say with absolute certainty that this system works.  It works for the cows who have demonstrated a marked reduction in stress, improvement in health and higher than expected levels of productivity. It works for the calves who thrive being reared by their mothers, growing twice as quickly as before. It also works for us and the farm staff, with reduced input costs and a highly motivated farm team.

“In simple terms what we are doing is simplifying and de-intensifying dairy farming. We’re working with nature and with the animals’ natural instincts to create an ecological, grass-based farming system, producing highly nutritious food with a positive environmental impact.”

The Ethical Dairy brand launched in 2018 and the Finlays have seen interest in their farming system rocket. Earlier this year David was named Farmer of the Year at the prestigious Ceva Animal Welfare Awards, and the farm hosted the UK’s first Ethical Farming Conference to showcase international best practice in regenerative and ecological agriculture. Consumer interest in their cheese was so high they had to bring forward a planned production expansion to meet demand.

To mark the conclusion of the three year pilot, The Ethical Dairy has released a video and a blog telling the story of their farming system through the experience of one cow.  The 3 year old heifer was one of the first cows born into the system and raised her first calf this summer. The video can be viewed on The Ethical Dairy’s social media channels and on You Tube at https://youtu.be/lAT9mVjyNMk .

“We didn’t embark on this journey as a marketing stunt or in response to topical concerns. Ten years ago very few people were talking about the challenges in dairy farming, in fact it’s only very recently that we’ve seen a surge in public interest in farming practices and a resulting increase in veganism.

“We developed this system because we were deeply concerned about the environment and the direction of travel of the industry.  We wanted to see whether it was possible to create a different system of dairy farming; one that puts the environment, high animal welfare and job satisfaction at the very heart of everything we do.”

Dumfries & Galloway, where the Finlays’ farm is located, is home to 45% of Scotland’s dairy industry. Introducing a radically different dairy model in the heart of one of the UK’s biggest dairy regions has not been without challenge.  David added:

“We know that many people in the farming industry think we’re crazy – in fact they’d probably use much stronger language than that.  I understand their annoyance at us, but the industry needs to respond to public concern.  There are powerful, global vested interests who are currently demonising all beef and dairy. Sticking our heads in the sand in the hope it all blows over is just not going to work.

“Grass-based regenerative farming systems can deliver incredibly positive environmental outcomes, as well as nutritious, high quality food. Scotland needs to lead the way in pioneering a grass-based regenerative system of agriculture that is as sustainable, in all senses, as it is productive. We now have very exciting results from our cow with calf model, and we are looking forward to sharing our findings with the wider industry.”

Rainton Farm is now working with a cross-sectoral innovation project that will undertake an audit of their system and disseminate key aspects of their cow with calf system to other farmers. The project will explore aspects such as overcoming barriers, financial modelling, benefits and market information to support potential new entrants to the system. Farmers who are interested in finding out more about becoming involved in the project are invited to contact David Finlay directly.

More information about The Ethical Dairy and its products can be found at www.theethicaldairy.co.uk on Twitter on @theethicaldairy and on Facebook @EthicalDairy