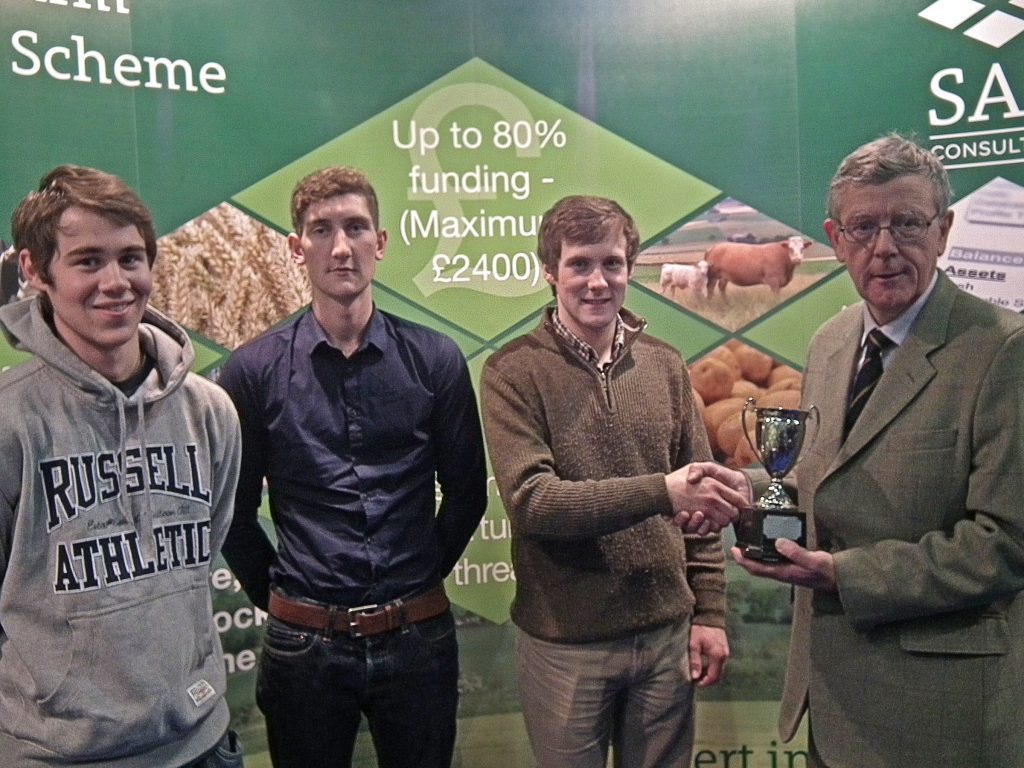 A team of students from the Barony campus of Scotlands Rural College have won the latest Mains of Loirston Winter Wheat Challenge. They beat 16 other teams from across Scotland and accepted their awards and trophy at 11. 30 am, on the SAC Consulting stand during the Agriscot event at Ingliston on Wednesday 19th November.
The annual competition is managed by SRUC on behalf of the Mains of Loirston Trust, established in 2007 by North East farmer, the late Alexander W Allan. He was committed to advancing education in the practice and science of agriculture in Scotland.

The Challenge is designed to encourage the next generation of farmers and agronomists by giving them their own plots of winter wheat to manage. Competitors decide what is needed to produce the most profitable crop, including variety, seed rate, fertliser, pest and disease treatments. Crops are grown on three SRUC run trial sites in Aberdeenshire, Perthshire and Edinburgh. Results are calculated after grain samples are analysed by grain merchant WN Lindsay of Gladsmuir, E Lothian and a price per tonne put on the wheat produced.

Since completing his HND at the Barony campus student Kilmarnock’s Cailean Knapp has moved to SRUC’s Riverside campus at Ayr to continue a degree course:
“The winter wheat challenge was a very educational experience for us all and tied in well with our course module Arable Crop Production which was a great benefit. This helped us to make our decisions on the choice of product and application rates to apply.”
“Choosing such a high end variety that was suitable for milling was a big decision that people would be very wary of doing due to Scotland’s climate. However we were all keen to set a high target and are delighted to have achieved it this year. Perhaps we chose some of the dearest products to apply but this paid off. It shows how investing in your crop and not cutting corners can bring great benefits.”

John Rhind, who presented the award on behalf of the Loirston Trust was delighted about the success of the competition:
“I congratulate all the winners. This is the sort of project Mr Allan would have approved of. It develops the practical skills of young people as well as introducing economic reality! The Loirston Trust is involved in many projects from the£450 to pay for signs at Taste of Grampian food show to the £34,000 in support of the intern programme run by Ringlink machinery ring.”
“This was a very different season to last year”, said lecturer Scott Murray who co ordinated the project across four SRUC campuses. “It required quite different strategies, particularly in terms of fungicide inputs to combat disease pressure and use of plant growth regulators to prevent the crop collapsing or lodging. Many of the teams had participated in last year’s Challenge and this experience was clear to see in some very considered decision-making.”

“An individual plot yield of 12.06 tonnes/ha was achieved at the Edinburgh site,” reports Scott Murray. “It also produced the highest overall team yield for one site, a very creditable 10.96 tonnes/ha. However, the winners are the ones growing their “crop” most profitably, measured by gross margin per hectare, averaged across all three sites.”
The teams placed second and third were:

A period of kind, autumn weather allowed the three sets of plots (Kirkton, Stanley, and Bush) to be sown in early October 2013, giving the Challenge a good start. Six different varieties were selected by the teams, reflecting the more insightful approach seen generally over the season and building on the previous year’s experience. The plots at Edinburgh and Perth were harvested in the last week of August 2014; the site at Aberdeen was harvested on 30 September due to wet weather.
The 2014/15 Winter Wheat Challenge is already underway. The largest proportion of the entry is from the SRUC Aberdeen campus at Craibstone and for this season the northern trial site used by the challenge will be on the Aberdeenshire farm hosting the 2015 Cereals in Practice specialist event. This will allow visitors to judge the competitors progress for themselves.

Ben McColm is in Australia and Fergus Scougal was unavailable

Ben McColm is in Australia and Fergus Scougal was unavailable