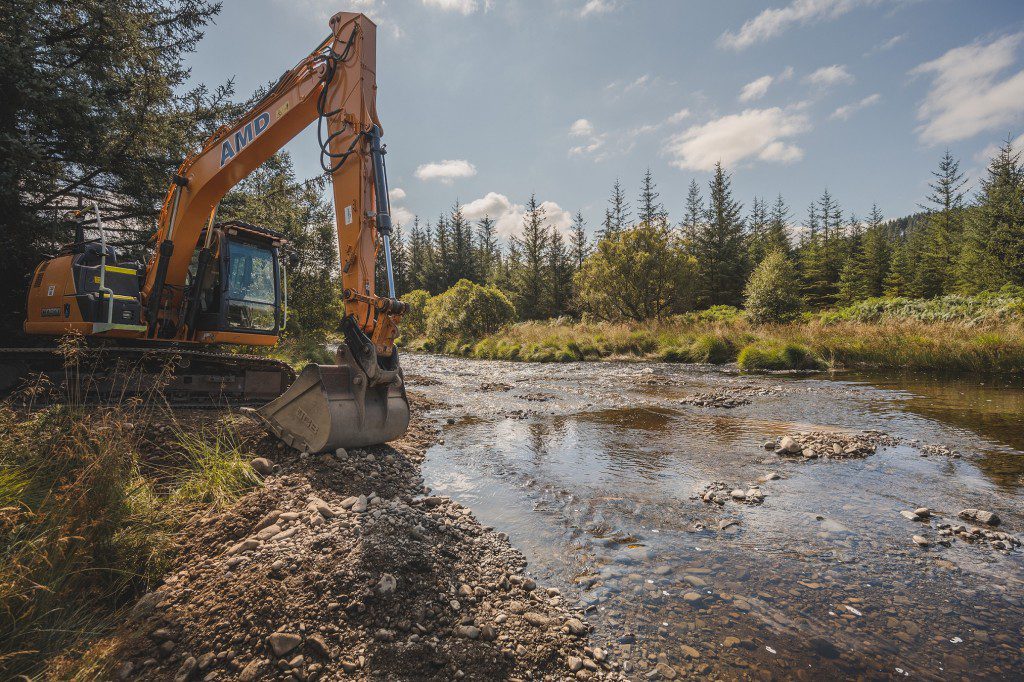 A ground-breaking project has got underway to restore the river habitat for the benefit of local fish populations – including Salmon and Trout – in the Black Water of Dee, in South West Scotland. 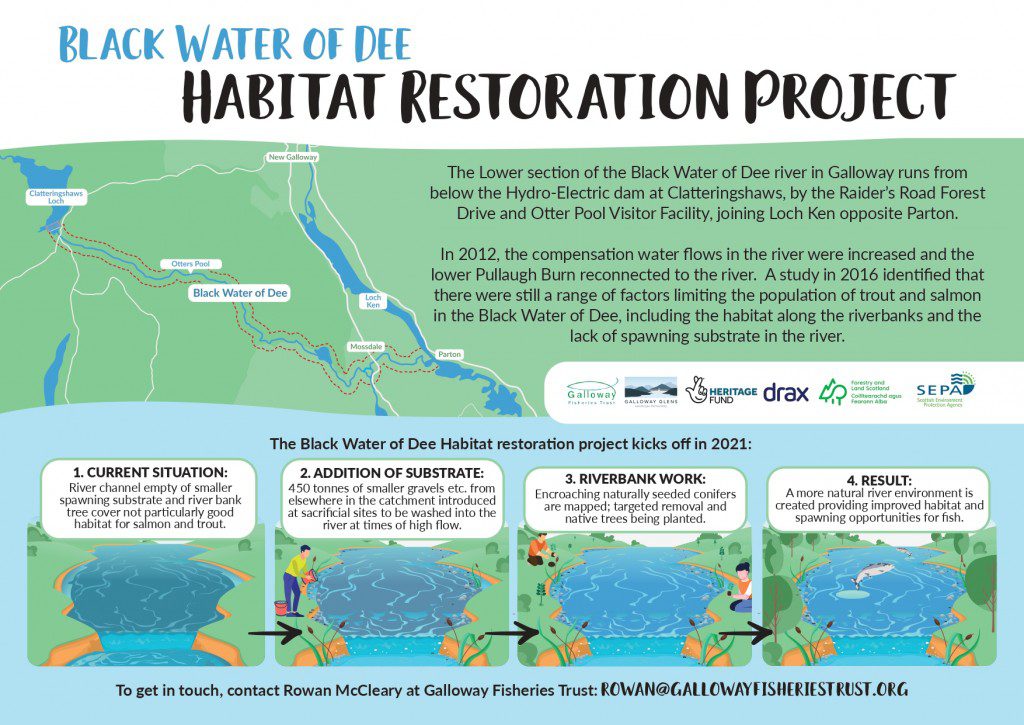 The Black Water of Dee is the largest tributary of the Kirkcudbrightshire Dee. Running from its source, deep in the Galloway Forest Park, through Clatteringshaws Loch, and down to Loch Ken, it derives its name from the dark colour of the water. The lower section of the Black Water of Dee River runs through the Galloway Forest Park, largely following the route of the Raiders Road Forest Drive, passing the popular Otter Pools visitor site.

Studies recently undertaken have sought to better understand the fish populations in this stretch of river and identify works that could support these. Nearly 20km of the lower Pullaugh Burn and Black Water of Dee is accessible to migratory fish but very few fish are found in the river, despite an increase in compensatory flow initiated in 2012 from Clatteringshaws Dam by the owners of the Galloway Hydro-Electric Scheme.

Galloway Fisheries Trust undertook a study in 2016 to look at the present health of the fish stocks and completed a habitat survey so that recommendations could be made as to what restoration work was required to recover the trout and salmon stocks.

The study identified a number of findings, including:

To address these findings, the ‘Black Water of Dee Habitat Restoration Project’ is now underway, consisting of three main activities which, considered together, make up an internationally innovative response to the challenges currently being faced:

Work is being led by Galloway Fisheries Trust, with support from the Galloway Glens Scheme (using funds from the National Lottery Heritage Fund), Drax – the owners of the Galloway Hydro Scheme, Forestry & Land Scotland and Scottish Environment Protection Agency.

“It is very exciting that this innovative project has now started. It is a perfect example of partnership working to overcome a range of pressures on the freshwater habitat which will have long term and significant environmental benefits for many species particularly fish.  Exciting times ahead!”

“This project has the potential to be a game changer for Atlantic salmon in the Black Water of Dee and a genuine first for Scotland. The lack of gravel in the Dee has severely limited the chances of salmon and trout to maintain themselves in the river. Moving gravel from the Water of Deugh where there is a surplus to the Dee where there is a deficit seems simple, but it has required imagination and partnership working from many partners to make it happen. Galloway Fisheries Trust has done an amazing job of working with DRAX, SEPA and FLS to drive this project forward. Hopefully the conditions will now suit that most iconic of fish in Scotland, the Atlantic Salmon.”

“The Galloway Hydro Scheme has played a vital and positive role in helping sustain the region’s iconic Atlantic salmon population in recent years. Drax is delighted to see this exciting new project begin and we hope it will go on to boost salmon numbers on the River Dee.”

The river passes through the heart of the Galloway Forest Park. Kim Kirkbride, Environment Forester at Forestry & Land Scotland, added:

“Salmon are nationally one of Forestry and Land Scotland’s (FLS) priority species for conservation. The project has taken many years of hard planning by all the partners, and as the land owner being given the opportunity to collaborate in the Black Water of Dee project has helped FLS to better understand the local issues affecting salmon populations, which is key for the survival of the species.

In the long term not only will this project help the local salmon population but it has also created a stepping stone for future restoration projects of this scale on a national level.”

An innovative project of this type has required a lot of preparation and engagement with the relevant regulatory bodies. Sean Morrison, Senior Fish Ecologist from the Scottish Environment Protection Agency, added:

“Whilst lots of work has been going on in the background for a number of years, it is fantastic to see the first physical aspects of the project underway. Providing suitable spawning and juvenile habitat for Atlantic Salmon is key to protecting these iconic species. Utilising in-house expertise in Fish Ecology, Hydromorphology, and Environmental Regulation, SEPA are delighted to play a role in this exciting project and help bring about positive environmental change through partnership working.”

For more information about the project, visit the Galloway Fisheries Trust website, https://www.gallowayfisheriestrust.org/.

Note: The River Dee is often described as the ‘Kirkcudbrightshire Dee’ to differentiate it from the river in Aberdeenshire of the same name.