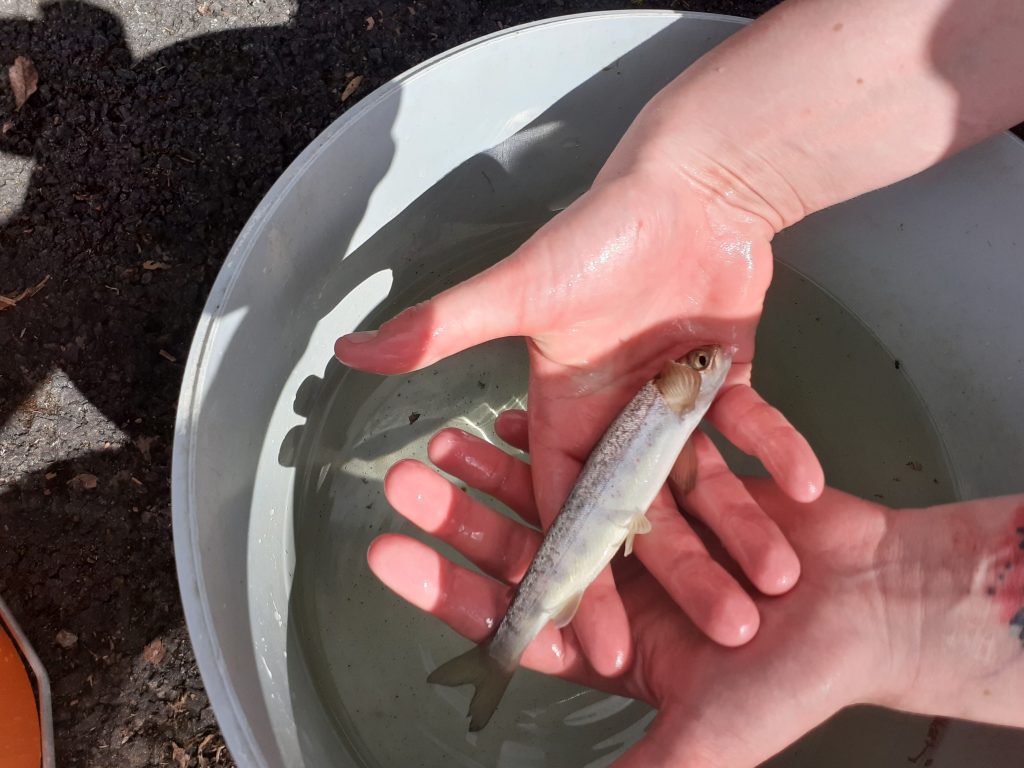 Over the last couple of years, a range of partners have come together to run an innovative project on the River Dee in Kirkcudbrightshire, tracking young salmon as they travel down the valley and out to sea.  This work has shone a light on the challenges they face and how this iconic species can best be protected.  Findings from this work will form the content of an online public event on 16th November.

The work was led by Galloway Fisheries Trust, supported by Drax – the owners of the Galloway Hydro Scheme, The Galloway Glens Scheme, University of Glasgow and the Dee (Kirkcudbrightshire) District Salmon Fishery Board.

The study focused on the capture of juvenile salmon at the point of smoltification (the point at which salmon start changing their physiology from being a freshwater fish and readying themselves to live in the marine environment) and tracking their movement down through the river system.  Salmon smolts are relatively small and vulnerable to predation by larger fish such as pike, fish eating birds such as goosanders and mammals such as otters.  The longer they spend on the migration the more vulnerable they are, this study looked at the mortality of the fish through the system and the length of time it took to undertake this journey, including past dams and other impoundments.

Fifty fish were caught and tagged with small acoustic devices which sent a signal to receivers that were placed down the river system.  Sixteen receivers were spread out from just below the Polharrow Burn (north of Dalry) all the way down to Kirkcudbright.   A project of this nature is only possible as recent advances in technology have managed to ‘miniaturise’ transmitters and batteries so they do not influence the swimming ability of small fish like salmon smolts.

Salmon used to be abundant across the Solway and the River Dee was, arguably, one of the most productive of these rivers.  Impoundments built on the river in the 1930s to harness energy had a large effect upon the ability of salmon to migrate through the system, both for smolts moving downstream and adult salmon ascending the river. Fish passage was considered during the construction of many of the dams with fish ladders built but understanding downstream migration of smolts has been more difficult.

This project has significantly increased our knowledge of smolt migration from the Kirkcudbrightshire Dee.  The data was obviously only a snapshot in time, but headline findings include a number of surprises, including the speed of the migration, which is faster than expected, and the relatively low losses of fish through the turbines in the Hydro-Electric Scheme.  There are many variable factors that affect the success of migration, and this study is just a snapshot of a single year.  Further work will need to be undertaken, with plans now underway to build on this with a further series of activities planned for 2023.

A short, non-technical summary of the work has been published and is available here: https://gallowayglens.org/wp-content/uploads/2022/11/Kirkcudbrightshire-Dee-Salmon-Migration-Study-2021-summary.pdf.

On 16th November, at 7.30pm, a Zoom event entitled ‘A Smolts Tale; Dams and Tides’ will take place including a presentation from Galloway Fisheries Trust and the University of Glasgow about work to date, initial findings and plans for the next steps. Free tickets are available here: https://www.eventbrite.co.uk/e/a-smolts-tale-dams-and-tides-tickets-433435606567. This forms part of the Galloway Glens Winter Programme of events.

“This has been a fascinating piece of research to deliver.  Salmon stocks are at a historical low at the moment and understanding more about migration routes is so important for their management.  Every river has its own characteristics and issues. This work has now identified locations where it appears there are increased levels of mortality which the partnership of organisations can now look more into to see what practically can be done to improve survival rates.  Salmon populations need every bit of help they can get at the moment to ensure their long-term survival.”

“We are delighted to be able to support scientific research projects such as this, continuing our work with the Galloway Fisheries Trust and other local stakeholders, to protect and regenerate the water bodies within our operational catchment.  It is extremely important for us to better understand the impact of our operations on the ecology within these water bodies and the initial trials have produced some interesting findings. We look forward to supporting further research in this area.”

“This project is another key step on the road to understanding fully the impact of the many threats and obstacles that young salmon face on their return to the sea, particularly in a heavily modified river system like the Kirkcudbrightshire Dee. There is more work to be done, but we are grateful to all those who have contributed funding to allow this project to go ahead.”

Salmon are an emblematic species of importance to Scotland’s biodiversity and culture that cannot be overestimated. They are under threat throughout their range. The reasons for this are complex and multifactorial and the only way of solving this for different bodies to work together to understand and solve the problems. This project is such an example where cutting-edge technology has been used to unlock a few of their secrets, providing knowledge that can be used to ease the pressure on the stocks. The Galloway Glens Scheme is in a fortunate position where it can use funds from the National Heritage Lottery Fund and others to help all the partners in their endeavours.

The Galloway Fisheries Trust is a charitable trust whose aims are to restore and maintain aquatic biodiversity, particularly native fish, in Galloway by means of practical, responsible and sustainable approaches to land, water and fishery management, based on sound science, for the benefit of the community as a whole. More info: https://www.gallowayfisheriestrust.org/.

The Galloway Glens is a 5-year suite of projects aimed at connecting people with their heritage, boosting the local economy and supporting sustainable, thriving communities. It is an initiative of Dumfries & Galloway Council’s Environment Team funded by a range of partners including the National Lottery Heritage Fund and Drax, the owner of the Galloway Hydro Scheme. More info: www.gallowayglens.org.

Drax Group acquired the historic Galloway Hydro Scheme in 2019 as part of a portfolio of important renewable, low carbon and flexible power generation assets. The company pledged £100,000 over four years to support community initiatives in the Galloway Glens region as part of its efforts to support those living in the areas in which it operates. For more information visit www.drax.com

About the Dee (Kirkcudbrightshire) District Salmon Fishery Board:

Salmon fishing rights in Scotland are private heritable titles that are registered separately from land. The cost of the local administration, protection and improvement of salmon fisheries is privately financed by the fishery proprietors via the District Salmon Fishery Boards (DSFB). The DSFBs finance their work by levying a rate on the salmon fishery owners in the district, whilst elected representatives of those owners provide the core of the membership of the Board. The DSFBs work to conserve Scotland’s valuable and iconic wild salmon and freshwater fish and fisheries and the aquatic environment on which they depend, often with limited funding. The Kirkcudbrightshire Dee has the largest catchment of all the Galloway river systems and is also the most heavily modified, therefore it faces unique challenges among Scottish rivers.