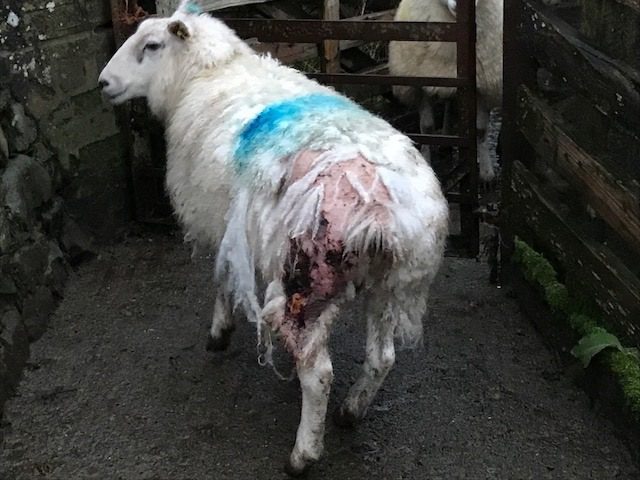 A campaign to protect Scotland’s livestock has been launched following new legislation which protects animals from dog attacks through a range of measures including updating the livestock definition, fines up to £40,000 and prison sentences for owners who let their pets worry, kill or injure farmed animals.

SPARC, the Scottish Partnership Against Rural Crime, is launching the Livestock Attack and Distress campaign with the slogan: ‘Your Dog – Your Responsibility’ to educate dog owners about the new legislation plus, where applicable, use the new powers to report owners of dogs which attack livestock.

The campaign was launched by SPARC today (January 11) at an event attended by SPARC members at the Pentland Hills Regional Park, near Balerno.  The regional park is a popular location for dog walking and has unfortunately experienced a number of attacks on farm animals in recent years.

Under the new legislation, camelids such as llamas and alpacas, together with ostriches, game birds and farmed deer are now protected plus the inclusion of the word “attack” is welcomed as this clearly reflects the more serious aspect of such an incident.  The new law also includes provision to fine the owners of dogs that attack livestock up to £40,000 or even send them to prison.

The campaign will run through the lambing season, when sheep and lambs are most vulnerable to attacks and will be then run again in the autumn.

The need to communicate the new measures to the dog-owning public has been shown by a recent survey* commissioned by leading rural insurer NFU Mutual with Scottish dog owners. Only 4% of people surveyed knew they could now be fined up to £40,000 if their dog attacked livestock and only 22% knew they could be sent to prison if their dog attacked livestock.

NFU Mutual claims figures show that the UK cost of dog attacks on livestock rose by 50% in the first quarter of 2021 (compared to the same period the previous year) as the pandemic led to a surge in dog ownership and countryside visits.

“Its introduction is timely given the increase in dog ownership experienced during COVID and the aim of the campaign is designed to educate and raise awareness amongst dog owners, whether new or experienced, that their dog is very much their responsibility.”

NFU Scotland Rural Business Policy Adviser Rhianna Montgomery said: “NFUS is delighted to be involved in this campaign. With hundreds of incidents across Scotland each year, the protection of livestock is paramount for our members.  The new Bill gives greatly enhanced powers to tackle this blight.  Working closely with other stakeholders, informing and educating the public of good practice when taking access in the countryside with dogs, and the penalties now in place for those who are irresponsible, is imperative in reducing the number of livestock attacks.”

Mark McBrearty, Regional Manager for Scotland at NFU Mutual, said: “Dog attacks are causing appalling suffering to animals and huge anxiety for farmers and crofters as they deal with the aftermath. The new legislation is a huge step forward as it means farmers and police are able to trace offending dogs’ owners and impose serious penalties.

“We’re supporting the ‘Your Dog – Your Responsibility’ campaign to spread the message about the new law and encourage irresponsible dog owners to control their pets. We want people to enjoy the countryside as it’s so important for people’s wellbeing. It’s vital that dog owners act responsibly and keep dogs under control whenever there is a possibility that livestock are nearby.”

The need for robust legislation was further demonstrated by an NFU Mutual survey** last year which showed that 64% of UK dog owners let their pets roam free in the countryside, despite half admitting their dog doesn’t always come back when called.

About SPARC: SPARC is a multi-agency partnership involving key organisations which was formed with a strategic vision of co-ordinating cohesive and sustained crime prevention and reassurance advice to rural communities throughout Scotland underpinned through empowering communities regardless of demographics and geographical location to ensure those living, working and enjoying these communities and environments have confidence that any crime related issues affecting them are taken seriously, acted upon and understood.

About NFU Scotland: The organisation was formed in 1913 and is Scotland’s leading agricultural organisation representing 9,000 farmers, crofters, growers and other supporters the length and breadth of the country. NFUS works alongside its sister organisations in England, Wales and Northern Ireland, as well as other rural, business and consumer groups

About NFU Mutual: NFU Mutual offers a wide range of products, including general insurance, life, pensions, and investments. These products and services are delivered through our network of NFU Mutual Agent offices, as well as through our direct sales and service centres. With over 300 local businesses located in rural towns and villages throughout the UK, NFU Mutual has become part of the fabric of rural life and remains committed to serving the needs of our members nationwide.  NFU Mutual is proud to deliver more than simply insurance. Making farming safer, supporting rural initiatives across the UK and helping to look after the environment are just some of the ways we do that. To find out more about everything we do to support our communities, visit https://www.nfumutual.co.uk/about-us/responsible-business