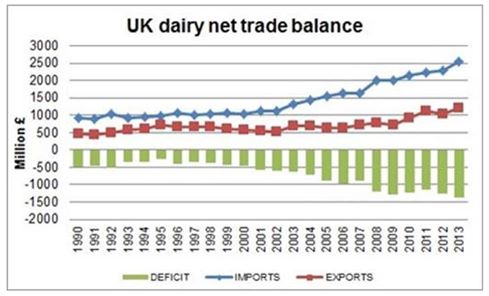 NFU Scotland has used Scotland’s leading winter agricultural event to call for a range of measures to help Scottish dairying through the current crisis.

Speaking at AgriScot, the annual event held at Ingliston near Edinburgh, the Union recognised that there was no quick fix to the worldwide volatility in dairy prices but mapped out short and medium term options that could help the Scottish sector move forward.

Responses to NFU Scotland’s dairy farmer survey are still coming in but forms completed to date suggest member support for measures that stabilise the sector at an EU-level; promote the marketing of Scottish and British dairy produce; address the growing imbalance between exported and imported dairy produce into the UK and help Scottish dairy farmers with business planning in light of the substantial falls in farmgate prices for milk.

NFU Scotland President Nigel Miller said:
“There is recognition amongst dairy farmers that volatility is here for long term. That said, we need a range of approaches to strengthen the Scottish dairy sector’s hand and producers must be part of the solution.

“At an EU level, we need Europe to introduce intervention for milk powders at a realistic price level. That would lend vital stability to a market hammered by the worldwide crash in commodity values and the unforeseen impact of the Russian food ban. The Union’s Milk Committee Chairman Gary Mitchell has been in Brussels pushing for these measures.

“Also of immediate benefit would be Scottish Government updating its whole farm review package to recognise the impact that such severe price falls are having of dairy farming families by introducing a fast-track approach for Scottish milk producers. That will help facilitate some important business planning decisions face by many farms.

“We also need to market, process and develop our way out of this crisis. We need the UK and Scottish Governments along with AHDB and DairyCo to give immediate consideration to initiatives that can drive sales of Scottish and British dairy produce. The opportunities are stark. We have a dairy deficit of more than £1.35 billion – a balance of trade figure that is getting worse by the day with cheese and butter imports currently satisfying 64 percent and 51 percent of our home market requirements respectively.

“In the medium term, we need to look at how we future-proof producers. That means looking at the structure of producer groups and organisations and wider adoption of appropriate and transparent milk pricing formulas. The role of the voluntary code on milk contracts will be important and, if necessary, the producer element strengthened.

“The post-quota era is upon us and, judging from our survey, it is alarming how few milk purchasers have taken the time to discuss with their supplying farmers contractual arrangements from April onwards. It is vital that this is an active discussion between producer reps and milk buyers rather than purchasers simply laying down the law.”

NFU Scotland Milk Committee Chairman, Gary Mitchell, who chaired the dairy seminar at AgriScot said: “There is potential for Scotland’s dairy supply chain to grow but firstly we need much more milk going into higher value markets along with increased processing capacity in Scotland to minimise the need for milk crossing the border. The breakdown in the balancing contract between First Milk and Muller Wiseman has exacerbated the problem and underlined the need for this to be addressed.

“It is apparent from this week’s meeting in Brussels that all European dairy farmers are struggling with the level of volatility in the dairy sector and there was wide spread support for more robust market intervention measures to be introduced.

“However, Scottish and UK dairy farmers must also be proactive in improving our lot. In early December, Union milk officials from Scotland, England, Wales and Northern Ireland will meet in Edinburgh to discuss the current situation and seek common actions. This meeting has been called by NFUS and supported by all the unions with a view to clarify what can be achieved at EU and Commission level, and then at UK policy areas which can be effectively tackled by the UK Unions collaboratively.

“Later next month we will also host a Scottish event looking to drive forward producer representation. Elected representatives of all the supply groups operating in Scotland and those dairy farmers without a current producer group will be invited to attend with contracts, the code of practice and effective representation all on the agenda.

“A few days later we will bring together our milk committee and branch milk monitors for an event aimed at giving us a better appreciation of global, European and UK markets, but also examining pricing models, supply chain issues and the retail sector.” Ends