Home Dumfries & Galloway News TOP OF THE CROPS IS CHOSEN IN DUMFRIES AND GALLOWAY YFC BALE... 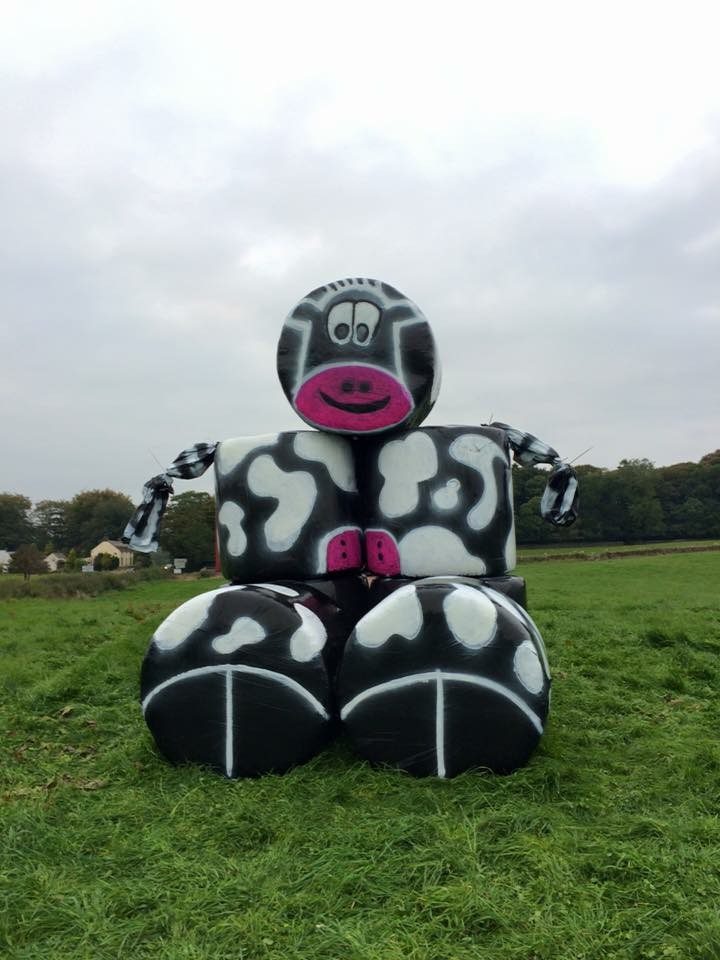 Colin Ferguson , District Chairman of Dumfries and Galloway Young Farmers Contacted DGWGO just over a week ago , and set our very own ‘RB’ the challenge of judging a regional bale sculpture competition held between all the local YFC clubs.

Colin told DGWGO this morning “Well just over a week on after the launch of what I thought was a cool wee idea to cheer folk up and get people talking in the region and how little did I under estimate the power of social media.”

“After the story broke about strange farmer folk battling to becoming the rural equivalent of ‘Banksy’ on the DGWGO website and social media pages, my phone and email has never stopped with the regular farm work being put on hold for interviews and the never ending ‘can you send me the picture’, my skills as both a photographer and email guru have increased!”

“Each call more impressive than the next, first the local papers, then onto national papers over the weekend, and national farming publication including the ‘Farmers Weekly’ and ‘Farmers Guardian’ and this morning there is even  Gallery on BBC website. But for me personally the most impressive was a TV appearance on ITV Border News last Thursday so a thank you to Lori and Paul for making that happen and everyone who helped bring that together.”

“The story really has taken legs and captured peoples imagination, only last night a German paper was in touch to ask for permission to run the story, so the saga continues and spreads further and wide with and shares on Facebook groups the world over, So in terms of a competition to raise the awareness of Young Farmers in Dumfries and Galloway I think I can count It as a total success and also for SAYFC on a whole, it really is a fantastic organisation with over 3500 member and increasing every year.”

“But with all the hype we almost forgot it was a competition and thanks must go to Robin Baird, local farmer and founder of  ‘DGWGO’ for taking on the very difficult job of judge this competition. A massive congratulation to ‘Lower Nithsdale YFC’ and Billy Hiddleston and Katie Austin, chairman and secretary respectively for there take on a cow ( Main Photo), Who Robin Chose as the overall winners.”

“But we are all winners and credit to each and every club for giving it there all and really placing young farmers on the social media map and promoting both the organisation and the region!”

Robin Said ” It was a huge honour to be approached to be Judge for this YFC competition, Since I started DGWGO over 4 years ago, I have judged many things , from Photography and talent Competitions, but a bale sculpture competition has to be the strangest request, but a very enjoyable task indeed. Its been brilliant to see these very imaginative  sculptures popping up right across the region, they have really got people talking, and smiling, I’m very sure people of all ages and walks of life have enjoyed spotting them while traveling along the regions roads. ”

“The Competition really has been a Social Media and Internet  success with the sculptures being seen world wide, a truly great way of getting Dumfries and Galloway noticed. I hope the Local D&G Young Farmers make this an annual event, and who knows maybe it may become a national competition over time.”

Robin went on to say” A Massive congratulations must go to all the YFC members that took part and created some fantastically imaginative and funny temporary art for us all to see and enjoy, It was no easy task to choose a single winner from the wonderful array of bale art, as really the whole of the Dumfries and Galloway YFC movement has won, by making so many of us smile. Thank you to Colin and all the local YFC Clubs for inviting me to be a judge for 2015.