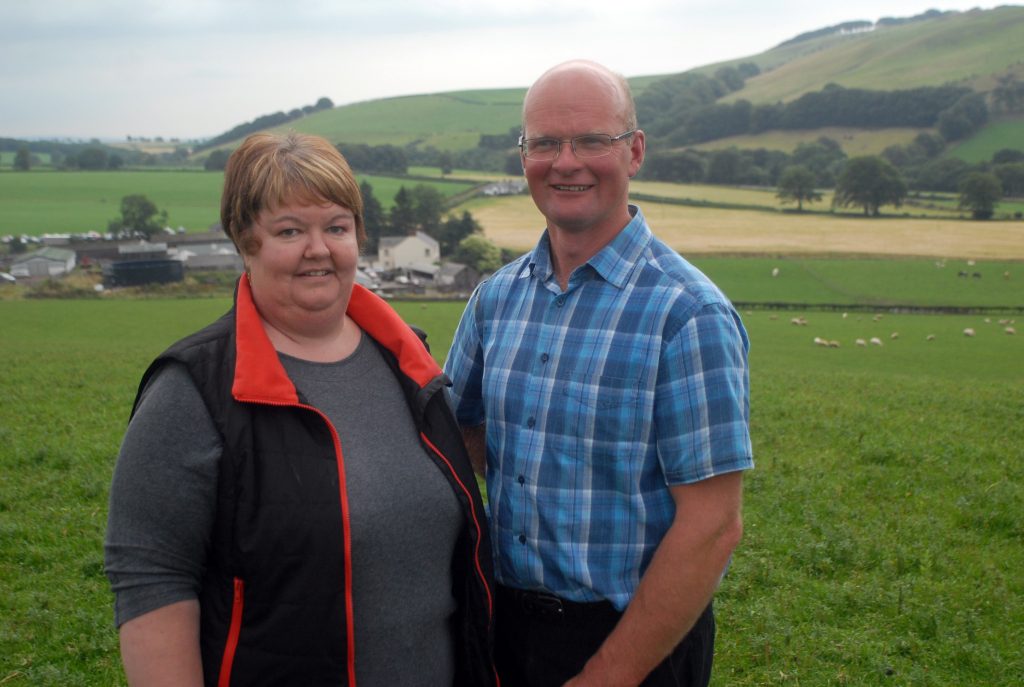 The importance of colostrum has been highlighted as one of the significant lessons learnt by the Dumfries monitor farmers during their monitor farm tenure.
John and Amanda Paterson run approximately 250, mainly Simmental cross, cows at Hartbush, a 606 acre (245 ha) mixed farm, located just north of Dumfries. Hartbush, the most southerly of the Scotland-wide network of Quality Meat Scotland (QMS) monitor farms, is the only monitor farm focussing primarily on beef cattle finishing.
At the recent meeting, an open evening attended by almost 120 farmers and members of the agricultural industry, Mr Paterson listed some of the highlights of the monitor farm term. “A number of livestock health issues were addressed, with what we learnt about colostrum being the best,” said Mr Paterson.
Livestock farmers appreciate the value of early colostrum to new-born animals. At the May 2013 monitor farm meeting, veterinary surgeon Peter Hastings of Nithsdale Vets in Thornhill explained why it is important to make the most of the “once in a calf’s lifetime” opportunity to maximise the health benefits available from colostrum.
“Calves are born with no immunity to diseases. Colostrum contains antibodies which are large protein molecules. Once absorbed into a calf’s bloodstream these antibodies form the basis of the calf’s immune system until it begins to develop its own immunity at around twelve weeks old,” Mr Hastings told the meeting.
“To get into the calf’s bloodstream, the antibodies need to be absorbed through the calf’s gut wall. The ability of the gut wall to absorb antibodies reduces from the point of birth until 24 hours of age, at which point antibodies can no longer be absorbed into the bloodstream. It’s therefore important that the calf suckles and takes in colostrum as quickly as possible.”
Quantity is also key and Mr Hastings recommended calves to consume at least three litres of colostrum within six hours of being born.
Since then, the Patersons have ensured that all calves consume adequate colostrum within their first few hours. “We now make sure every calf gets around four litres of colostrum within two to three hours of being born,” explained Mr Paterson.
“When a calf has not sucked by itself within a couple of hours, we intervene and either hold the calf to the udder until it has sucked adequate colostrum or we milk the cow out and tube the calf.”
The Patersons’ cow management post-calving involves cattle being individually penned using a handling system which promotes safety.
To boost colostrum quality the month before calving, the Patersons now feed in-calf cows 1kg/hd/day of dark grains which have a high content of rumen by-pass protein.
Comparative blood tests, taken from calves born in spring 2013 – before the new colostrum policy – and spring 2014, showed a significant improvement in the level of immunity achieved, with a subsequent reduction in calf disease.
“Making sure a calf has had a good feed of colostrum within its first couple of hours may seem time consuming and labour intensive, but we’re convinced it’s well worth it,” said Mr Paterson. “Time spent ensuring a calf gets the best possible start in life saves a lot of time later on trying keep a calf going. Since we started doing this, we’re convinced that overall the young calves are much healthier with a lot more vigour.”
The next Dumfries monitor farm meeting will be the final one in the three year term.
Full details on the Dumfries monitor farm are available from the facilitators, Savills Smiths Gore:
Judith Hutchison. Email: judith.hutchison@Savills-SmithsGore.co.uk
Matthew Currie. Email: matthew.currie@Savills-SmithsGore.co.uk
James Worthington. Email: james.worthington@Savills-SmithsGore.co.uk