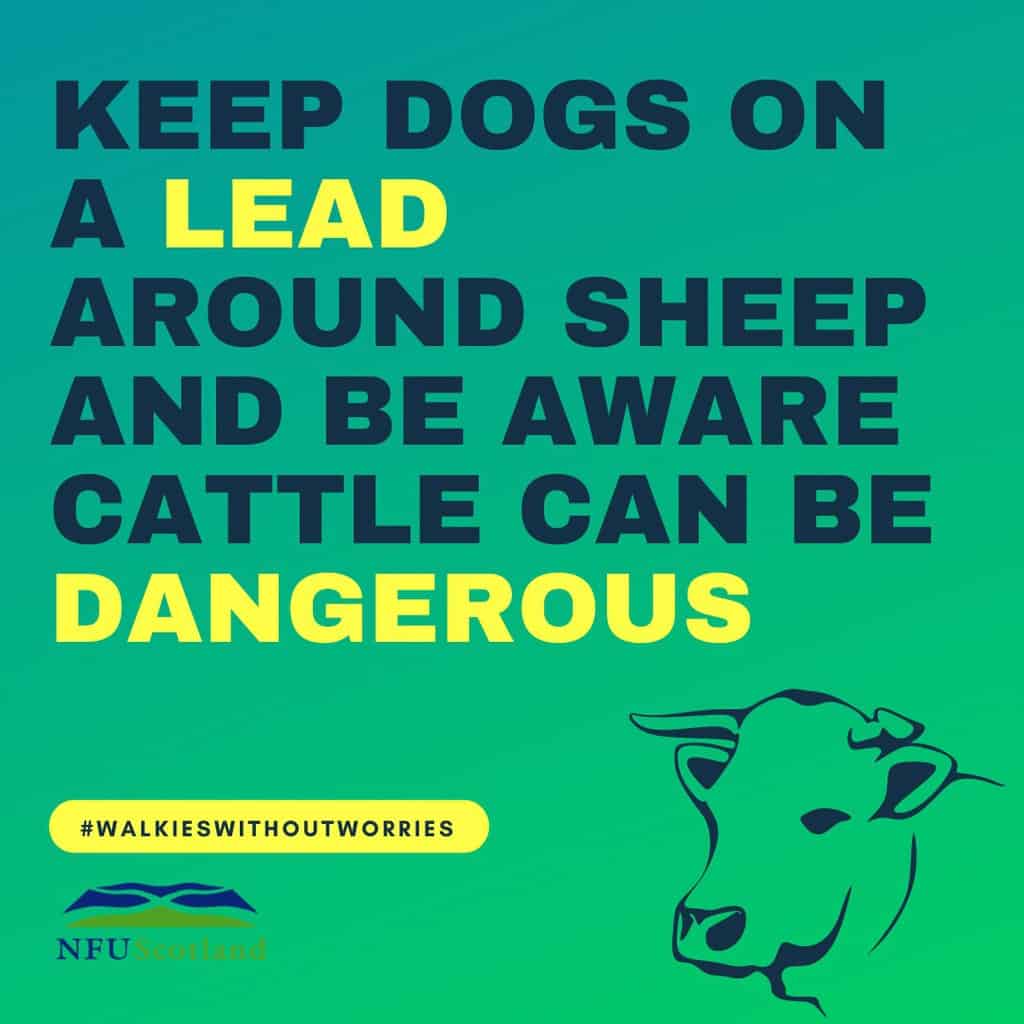 As the nation prepares for Covid-19 restrictions easing and the Scottish countryside opening up this Easter, NFU Scotland has launched its #WalkiesWithoutWorries social media campaign to encourage responsible dog walking.

The pandemic has seen an increased number of people walking in the countryside, many being new or previously infrequent visitors. There has also been a significant rise in dog ownership during the last 12 months at a time when puppy and dog training classes have been unavailable.

With Scotland’s fields full off heavily pregnant cows and ewes and large numbers of new-born lambs and calves, greater access to the countryside, often accompanied by dogs sees the Union’s #WalkiesWithoutWorries campaign promoting responsible access.  Using simple infographic messages, it urges members of the public to:

This has useful information, downloadable resources including posters and infographics and signposting to useful access guidance.  The site is interactive and includes an important feature that encourages farmers and crofters to log any access issues that they are facing, including access taken with dogs. Member feedback on https://www.surveymonkey.co.uk/r/L8TRM95 will provide NFU Scotland with vital information to advocate for any change needed that protects farmers and crofters from issues caused by those acting irresponsibly while taking access.

Lanarkshire farmer Tom French, who chairs NFU Scotland’s Legal and Technical Committee said: “The Scottish Countryside is a beautiful working environment where many people want to go and enjoy themselves with their canine companions safely.  People want to do the right thing in terms of not distressing farm animals and disturbing wildlife.

“The social media campaign #WalkiesWithoutWorries sets out 5 helpful messages to ensure that doggies and their owners have an enjoyable, safe and responsible time while respecting those living and working in the countryside and their livestock.

“We want to support the public, especially those who are new dog owners or new to the countryside, by giving clear messages so they can have #WalkieWithoutWorries.   We encourage our members and those working and living in the countryside to share the infographics on social media so that there is less likelihood of ‘worries’ for them.”

The Access Information Hub and #WalkiesWithoutWorries campaign is the brainchild of NFU Scotland’s Ayrshire Regional Manager, Christine Cuthbertson who said: “From speaking with our members, I was very aware of increased access being taken with dogs over the last 12 months.  I wanted our farmers and crofters to have easy access to support and guidance via the Access Information Hub as well as helping dog owners to have a safe and enjoyable walk in our beautiful country.

“I am very fortunate to own a lovely dog Mishka.  Having been brought up on a livestock farm, I was aware from a young age that you must respect farm animals, wildlife, and the environment.  I realised that it would be helpful to dog owners new to the countryside to have some simple steps via #WalkiesWithoutWorries to help them and their wonderful canine companions keep safe and well.”