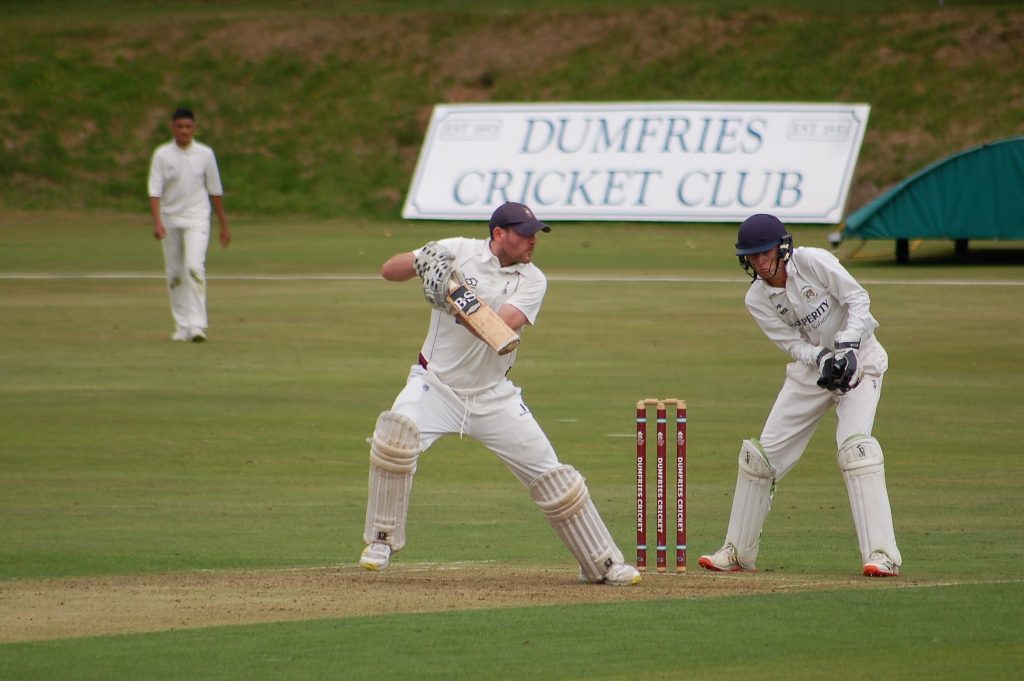 Your Move Dumfries Cricket Club faced a tough task as they hosted Premier League leaders Clydesdale on Saturday. They were put in to bat at Nunholm with the challenge of posting a total to defend.

Openers Drew Dawson and Scott Beveridge set out well with a fifty opening partnership but Dawson was caught for 23 and Beveridge mistimed a pull shot to be caught for 33. A returning Adam Malik and Robert McBride steered their side to be at 100 for 2 after 30 overs with Scotland all-rounder Berrington and the Clydesdale change bowlers having slowed the scoring. However Malik was caught behind driving for 14 and Robert McBride was bowled by Cairns for 25.

It required a partnership between Chris Brockwell and Alan Davidson to accelerate the run  scoring with both batting well. Both passed thirty but both were caught on the boundary off spinner Cairns in the closing overs. Dumfries fulfilled the cricket predictor of doubling the thirty over score to be all out off the last ball on exactly 200 to use all of the fifty overs and with a number of batsmen contributing but without achieving the big score.

Dumfries required wickets to turn that into a challenging target on a flat Nunholm track and the spin of Beveridge succeeded by trapping one opener early. Opener Barbour and Jawad were picking off their boundaries when Brockwell bowled Barbour for 29 with his first delivery.

That brought Berrington in to join Javad and their partnership also reached 100 for 2 but off ten overs fewer. The Dumfries bowlers kept things accurate and kept extras down but a couple of hard catches were not held onto and without decisions in their favour the batting pair were able to keep ahead of the required run rate.

In the end the only question was whether Jawad could reach his century which he did, just, with a ramp for four to hit the winning runs. He finished on 101 with Berrington on 52 not out. Alan Davidson just edged the RG & RB Williams Player of the Match for Dumfries with his efforts with bat and ball.

On Friday Dumfries U13s had to chase a three figure score of 100 for 5 by Carlisle U13s. Munro Cubbon and Jacob Holden both took two wickets for the home team. Three early wickets stymied the Dumfries reply and they finished short with the James Hallam Player of the Match Jacob scoring fluently with the top score of 25 and Thomas Cook batting valiantly on his debut.

Niamh Muir and Emma Fordyce were part of the Scotland U15s Girls who registered four wins out five at the Malvern Cricket Festival. Niamh, in particular, shared a 126 run opening partnership scoring 45 not out for a ten wicket win in game one against Norfolk. She, with Orla Montgomery, also shared the Scotland Women’s Super-Series on Sunday as their side finished level with five wins to both teams.