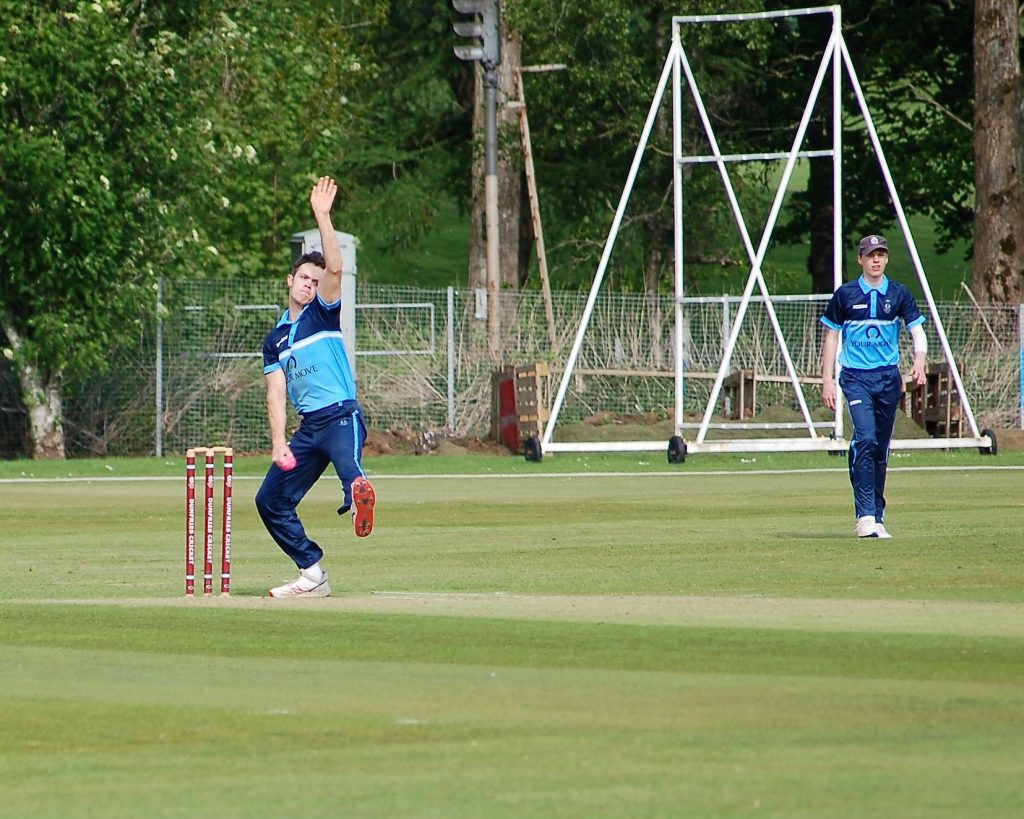 In the West Premier League Your Move Dumfries beat Stirling County by 1 run to move into fourth place. Tommy McGrath starred in a remarkable fight-back taking 4 wickets plus a direct hit run out to win the game and the Farries, Kirk & McVean Player of the Match.

Stirling pursued a Dumfries total of 254 for 9 and Scott Beveridge bowled both openers as Stirling passed the hundred. McMullen and Sahare then seemed to have settled the outcome as Stirling cruised to 29 runs needed and 7 wickets left.

However Sahare tried to hit another 6 but was caught and the Stirling defences were breached. McGrath took two wickets bowled and keeper Bainbridge caught his third. Wickets by McGrath and Davidson in the penultimate two overs set up a final over. Four to win, one wicket left, but an attempted single was not enough to beat a direct hit run-out by McGrath for an unlikely one run Dumfries win.

In the final winning total, just, of 254 for 9, Scott Beveridge top scored with 69 and Jesse Smit hit 66 not out. Chris Bellwood (28) and Alan Davidson (29) also contributed.

Dumfries 2nds also won in the Second Division at Motherwell. Sean Thornely restricted Motherwell by taking two wickets. James  Cox and Hyder Hussain also took a wicket apiece and thereafter spinners Harith Hassan took one and Vaughn Staples three wickets for a total of 101 all out. Nunholm opener Mat Williams then scored 32 not out, Max Corbett-Byers added a swift 38 and Sean Thornely 20 as Nunholm won easily.

The Sunday Development side also dismissed Appleby for 101. Vaughn Staples claimed two early wickets. Fergus Bainbridge took two and Jacob Holden another. Then Harith Hassan was able to spin Appleby out with the season’s best  bowling figures of  5 wickets for 7 runs. Again Mat Williams scored runs with 40 not out and youngster Jabarkhil hit 28 not out in a nine wicket win.

In the Women’s Premier League the local combined Dumfries, Galloway team won by 44 runs against visitors Stewart’s Melville.  The home side reached 34 for 3, with Lorna Jack bowled for 22, before Niamh Muir and Hannah Rainey put on 68 runs. Both were run out, Muir for 21 and Rainey for 58. Orla Montgomery contributed a run-a- ball 16 as the side reached 162 for 8 wickets.

Rainey confirmed her CAM Engineering Player of the Match as she dismissed fellow Scotland players Katherine Fraser (20) and Katie McGill.  Prince-Navaratnam took a wicket bowled and, after a fifty run partnership, opener Catherine Holland was another Rainey victim for 47. Muir took two wickets and Rainey finished with 4 wickets and Stewart’s Melville 118 for 7.

Dumfries Under-13s won at Carlisle with Jasmine McCulloch the Coach’s bowling pick taking two wickets in Carlisle’s 115 for 3. Avi Chaturvedi and Isaac Ishmael provided a platform; Munro and Nairn Cubbon both hit retiral scores of 30; and McCulloch and Cory Dawson completed the win in the final over reaching 119 for 3.

Dumfries Under-11s also had an exciting game at Penrith where they lost by 17 runs. Jak Aindow had a promising debut with runs and his first wicket. Cory Dawson scored 41 in the total of 268 for 5. Penrith reached 285 with Angus Pickstock taking three wickets and Archie Coltart two.