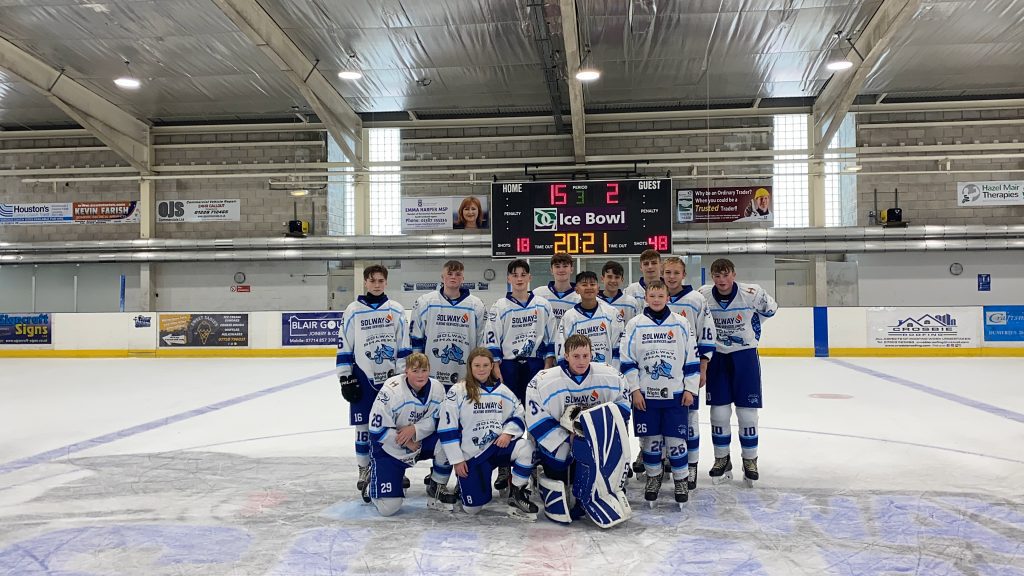 The Junior Sharks got back into action at Dumfries on Sunday morning, the under 16s team taking on their counterparts from North Ayr in a challenge match to get their season underway.  Resplendent in their new team jerseys, sponsored by Solway Heating Services and Stevie Wight Electrical, the team made a great impression, Gregor Mills getting on the score sheet with a shorthanded goal within a minute.  The visitors struck back within seconds, only for Solway to retake the lead through Tomas Vyrostek with another shorty at 3:24. More even play followed, before Sharks stepped up the pace and Bailey Thomson added to the tally at 11:16.  Kyle Carruth was next to score, at 12:43.  Mills added another at 15:32, before North Ayr clawed one back seconds later.  Owen Rae added another to take the score to Sharks 6 North Ayr 2.

The second period saw Solway again dominate, Carruth scoring two within 3 minutes, followed by another from Mills, as the speed of the top line proved too much for North Ayr to contain.  There was some imaginative play throughout the team, with some smart touches from Abileigh Turner, Ewan Duignan and Tony Ho contributing to game.  The second break saw Solway with a convincing 9 – 2 lead.

While N Ayr netminder Caiden MacColl was under constant pressure, his Solway counterpart Logan Reid was less tested, but still delivered when called upon. Mills was quickly on to the scoresheet again for Solway with his fourth, followed by a goal for Cassie McGregor, assisted by William Daley, before Carruth added his fourth.  Ajay Turner got himself into the scoring next, assisted by Travis Carruthers.  McGregor added another to the tally, before Ajay Turner got his second and what turned out to be the last goal of the game.  The convincing victory saw a final score of Solway Sharks 15 North Ayr 2, and Cassie McGregor was Solway player of the game.

Coach Jamie Kerr told us, “For not having played a full game in over 18 months, the team started the game really well with some good fast and fluid play giving us a healthy lead. Between some penalty distraction and maybe taking the foot off the gas the middle of the game was the poorest but we kicked on and finished strong again. Lots of positives and areas to work on so a beneficial game to have under our belts”.

Solway Sharks juniors are recruiting.  If you want to learn to play ice hockey contact Dumfries Ice Bowl on 01387 251300 for details of sessions.