Home Sports News Extra Time Win to Kilmarnock Against Queen of the South Ladies Under... 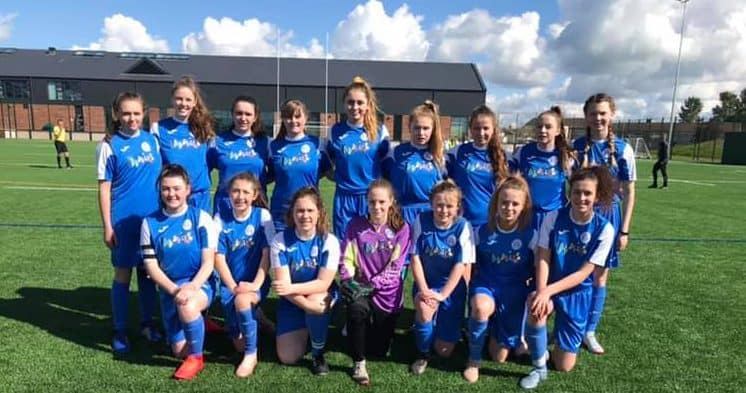 Saturday morning may 11th 2019 saw the Queen of the South Ladies u15 blues face Kilmarnock in the league cup semi final. With both teams being unbeaten in the league it was always going to be a close game and both teams served up a great game of football which was enjoyed by a large crowd.

The early stages of the game saw some early Kilmarnock pressure but Queens defended well and gradually came into the game after 10 minutes and started to cause Kilmarnock problems at the other end. An even first half saw the teams go in level at half time 0-0.
Queens came out for the second half strongly and created several chances with the Kilmarnock keeper making a great save to deny Holly the opening goal, however Queens scored a deserved opener from substitute Eve Jackson who fired a 20 yard free kick into the top corner with her first touch much to the delight of her team mates and crowd. This spurred Queens on and they nearly scored a second when Eves long range effort cannoned off the underside of the bar down onto the line.

Kilmarnock didn’t give up and were rewarded with an equaliser 3 minutes from time with a long range effort of their own. FT 1-1.

Extra time started with both teams looking for that elusive winner and it was Kilmarnock who took the lead after 7 minutes of extra time, Queens continued to press for the equaliser and as they threw more players forward Kilmarnock grabbed a third to secure the victory.

Jan 22, 2020
2020 is the Year of Scotland’s Coasts and Water. The new foyer display revealed this week at Dumfries Museum explores the cure or kill...

Top Gear Set to Return to BBC Two on Sunday