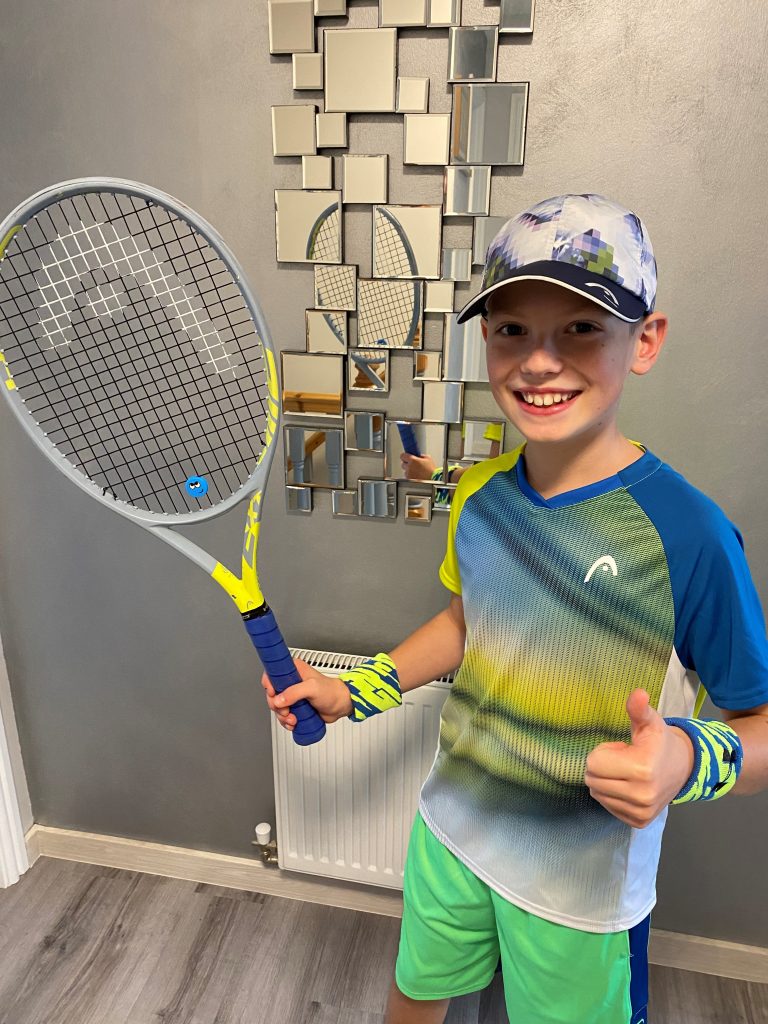 Dominik Czopek age 10 who is a pupil at Laurieknowe primary school, Dumfries started his journey with tennis four years ago.

He attended a tennis for kids programme and became hooked. He went on to develop his skills by attending coaching sessions three times a week at Dumfries tennis club and also has weekly individual caching sessions. At 7 years old, he started competing in mini red ball competitions and at 8 he won many of the tournaments he took part in.

While on holiday in Poland, he also played in a red and orange ball competition which he won, and was placed 3rd in Babolat cup which is a big event in Poland.

2021 was a really successful year for him. During lockdown he worked really hard on his fitness and technique, and every day he was practising in the garden or at home. When tennis and coaching was allowed again he started to progress very quickly. He was in three grade3 competitions and finished as runner-up, East, West of Scotland and st St. Andrew at Tayside Open 10u. After that he trained hard to come back even stronger.

Dominik started to travel far away to England to try his skills on English opponents. As a result he won in Thongbridge Open grade 3, then another 2 Regional tournaments grade 3, Prestwick and Sunderland. He represents South of Scotland in county cup competitions and qualified three times to play National Tour grade 2 in Yorkshire, Nottingham and Glasgow. The best results that he achieved from National tour was qualifying to reach quarter finals.

After a great performance in competitions the Lawn tennis association (LTA) invited Dominik to play match play in London Sutton with the best 24 UK players. Then afterwards he was selected by the Lawn tennis association (LTA) for National pathway programme and invited to another match play in Corby and London (Bromley) where only the best 16 players were invited from whole UK and Dominik was the only boy from Scotland to be invited.

After such a successful tournament and his wins, he gained many points which finalised his 2021-year 10u categories to finished as number 1 in Scotland and 14th in whole UK.

He got inspired by watching older better players when he was in Nottingham and he said; ‘Mum, I want to play like this or even better, I want to be a professional tennis player and be a champion like Novak Djokovic’. So, after these trips he started to do the sport more seriously.

He is now a yellow ball player with a new age categories 11u and already had some achievements like winning grade 4 competitions in Middlesbrough and Carlisle against older boys. He got some experience to play in Teesside 14u tournament against boys who were 3 years older than him. He did really well by finishing in 3rd position and beating much older boys.

‘We know that this is just the beginning of his tennis journey,and he still needs to practise a lot, and learn a lot, but he does pretty well, and we are proud of him’- mum said.

If anyone could help to support us with his journey it will be very much appreciated.