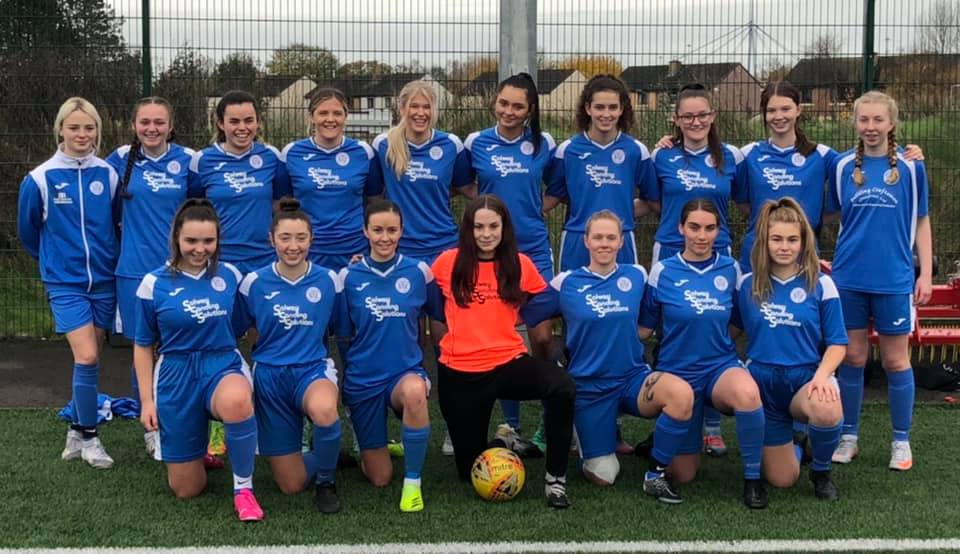 The visitors could only field 10 players for the first half of the game, and had no substitutes available, but Queens showed no mercy right from kick off, midfielder Megan Masterton opening the scoring in the first minute with a shot from distance. Queens piled on the pressure with Freya Brown on the right wing providing the ammunition with a series of superb crosses, and a goal rush materialised, with further goals in the 4th minute (Holly Ovens), 5th minute (Abbie Dunlop), 8th minute (Ovens), & 10th minute (Sonya Carruthers).  Freya Brown added a 6th goal herself in the 12th minute, scoring direct from a corner kick for the second week running, and Ovens added a 7th in the 15th minute. Midfielder Megan Masterton fired home the 8th on 20 minutes and Queens took a breather, with some slight respite for Annan until the 32nd minute when Carruthers, back in action after a long lay-off due to injury, added a 9th goal. Megan Masterton made it 10 in the 36th minute, completing her hat trick, and central defender Leona Smith got in on the act with Queens’ 11th goal shortly before half time.

Queens made 6 changes for the second half but their dominance continued. Leona Smith added the 12th in the 52nd minute and with 64 minutes gone it was unlucky 13 for Annan when Charlotte Smith shot home. Midfielder Amy Craik added another after 66 minutes with a neat finish.  The pace of the game had slowed slightly by this stage but Queens weren’t finished, and Charlotte Smith bravely headed home in the 75th minute, colliding with the post in the process; after a brief delay she was able to continue.  Queens still weren’t finished & Central defender Leona Smith added a final goal to complete her hat trick, a rare achievement for a central defender, in the 90th minute.  A comprehensive win for Queens, but to their credit Annan, despite being outplayed for most of the 90 minutes & having no fresh legs to bring on, continued to try to play football right to the final whistle.

Queens have a free weekend this week but still have two away games to complete the league season.