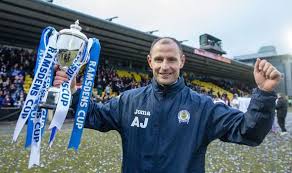 Following the decision to part company with Gary Naysmith after Saturday’s game, which after consideration was felt to be in the best interest of Queen of the South FC,  the club have moved quickly to appoint Allan Johnston as the new manager. He takes over with immediate effect and will be in charge of tomorrow’s training session to prepare the players for Tuesday evening’s play-off away to Montrose.

The 45 year old has previously led the club to a historic league and cup double having been in charge of the team for the 2012/13 season when we won the second division title and the Challenge Cup. That successful campaign earned him recognition and a move to Premier League side Kilmarnock. “Magic” then went on to manage Dunfermline, where he most recently spent four years in charge.

Chairman, Billy Hewitson said “After taking the decision to relieve Gary of his duties it was vital that we moved quickly to put the new man in place. As a club we have a very important week ahead and his priority will be to lift the players and to have them up for two games against Montrose as we aim to hold on to our Championship status. Allan is someone who knows the club and the division very well and we feel he is the ideal appointment”.

Sandy Clark will also be making a return to the dug-out as Allan’s number two.