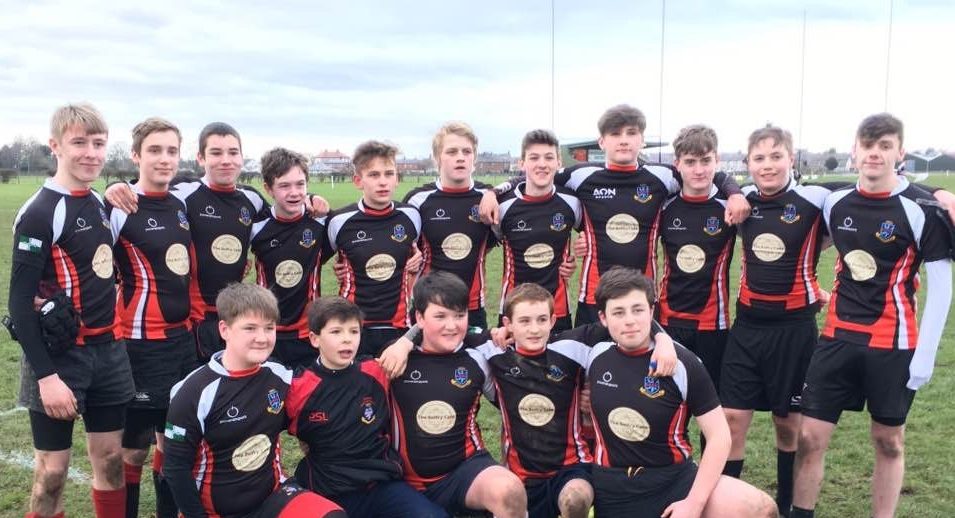 A small but vociferous crowd was kept warm on this bitter day at the Park Farm ground by a pulsating match in which the lead changed hands several times and eventually the teams would only be separated by three points. Both teams were intent on playing attacking rugby evident by the scoring moving along at almost a point a minute for the whole game. Eventually the Stewartry were rewarded for their attacking efforts by a try, with less than a minute to go, which turned a two point deficit into a three point win.

Stewartry started the match very brightly, following up their kick off, regaining the possession and working the ball smartly down the right wing. Soon after this, a Stewartry scrum resulted in quick ball from which the ball was worked down the blind side. Three offloads later, Peter Young was close enough to drive over the line to score the first try of the match. Young also converted his own try.

Almost immediately Dumfries showed their attacking intent by taking a tapped penalty in midfield and after winning the ensuing ruck, moving the ball wide right to their fast winger who went around the Stewartry defence to score a converted try.

While Dumfries seemed to have the bigger individuals who made inroads with individual runs, Stewartry were able counter by hanging on in defence and working hard to turn the ball over. Several of these turnovers came in the scrum where hours of technical work in practice enabled Stewartry to dominate their bigger opponents. Andrew Bowden and Connor Clanachan at prop, supported by the second row of Zack Hunter and Robbie Briggs, were too good for their opponents and gave Paddy Traynor, at hooker, an armchair ride. From one of these disrupted scrums, Stewartry recovered the ball and David Martin put in a long, rather speculative, kick deep into the Dumfries 22. The kick chase by Stewartry was enthusiastic and regained the ball, with Young going over for his second try. Stewartry came close again minutes later with Bowden in close support of a barnstorming run by Fraser Gibson, but being held up just short. At the other end of the pitch Dumfries came close to scoring, being similarly held up just short by great scrambling defence from Murray Ross and Euan Reeves. They were however next on the score board after winning a scrum thirty meters out from which the Number 8 picked up and forced his way through three tacklers.

Dumfries now had their tails up and from a quick tapped penalty in the middle of the pitch they moved the ball to several pairs of hands after which their big lock straightened the line, broke several tackles and ran on to score under the post. The proximity to the posts made the conversion a formality.

Stewartry were beginning to look fragile and it seemed that they might run out of the courage to front up to the tackles required to keep Dumfries at bay, especially if they sat back and did not press. Kerr Dalrymple showed that if defensive pressure was applied then Dumfries were likely to make handling mistakes.  In possession however, Stewartry still looked confident and after a good phase of Stewartry attack, Dumfries were back in their own 22 and having the put in to the scrum – Stewartry’s dominant scrum disrupted the first two put ins and on the third, won the ball against the head. Simple passing to the right, started by Jack Callander getting the ball quickly away from the scrum, found Fin Telfer who fought his way to the try line, handing off several tacklers in the way.

Half time saw Dumfries ahead by one conversion after six tries having been scored in the first half. The question in the minds of the spectators was whether Dumfries had the power runners to demoralise Stewartry or whether the superior rugby being played by the Stewartry could keep them in the game.

The next score came almost immediately after half time with Dumfries getting the ball to their strong winger who easily outstripped the Stewartry defence to score a converted try under the posts. Stewartry still refused to bow and started to play more directly with Young taking the ball to the line and offloading to the supporting runners like Martin, Gibson and Clanachan. A move going right saw a lovely, back of the hand, offload by Young to Gibson, once again in support. This put Stewartry in a very good location on the pitch with Dumfries having to defend from a scrum. They secured messy ball and tried a clearance kick from almost on their try line. The kick was sliced horrendously, only going about four metres forward, but managed to fall into the hands of their outside centre who had the speed and strength to run ninety metres to score a try.

Stewartry were now three scores behind but responded to this pressure with a great defensive press to regather their kick-off. Now playing the best rugby of the match, Stewartry attacked with phase after phase, ruck after ruck. Bowden drove close to set up another ruck from which Young spun out a long pass for Murray Ross to score far out on the left. Young saw the conversion drift wide in the wind. Soon after, Stewartry, buoyed by their recent success, once again regained the kick-off and made good ground on the right, Reeves being pressured into a mistake close to the Dumfries line. Stewartry pressured the scrum to ruin the quality of the Dumfries possession and, after a sequence of poor handling, Martin snatched the ball and scored under the posts from about five metres out. This enabled Young to convert the try and the Dumfries lead was down to two points with only a few minutes left on the clock.

Once again Stewartry followed their kick-off and having resecured possession drove on down the right. Several players made thrusts for the line, being held up at least twice. From the resulting scrum, Stewartry again secured stable scrum ball and Edward Hannay broke blind from scrum half feeding Martin who squeezed in at the corner. Young could not convert from the touch line and so Stewartry now had to hold their nerve and ‘exit’ efficiently from the Dumfries kick off. This they did not do, with at least three fumbles before someone managed to tidy up the ball and set a defensive ruck. From this Martin kicked the ball dead knowing that time was up and thus Stewartry won a significant victory against the fancied Dumfries side.