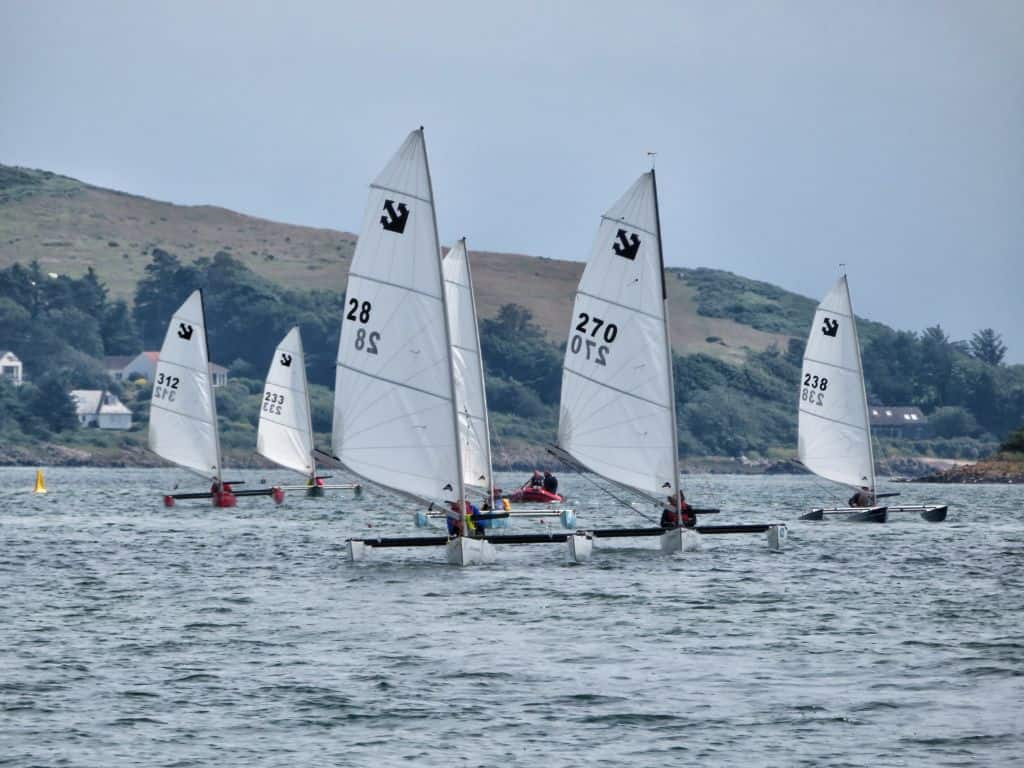 During the weekend of July 10th and 11th the Solway Yacht Club was privileged to hold a very special event in the yachting world. This was the Scottish Open Challenger Championship, organised by the Challenger Class Association. This is a charity which represents the interests of sailors with disabilities. The Association has developed a unique trimaran (three hull dinghy) which can be comfortably sailed, single-handed, by those with severe physical impairments.

A small fleet of six Challengers arrived at Kippford on Friday evening. They were then assembled, cleaned and polished ready to start racing on Saturday morning.

The weather forecast was not encouraging, predicting light winds for that weekend.

Salvation did however come in the form of a light north-westerly sea breeze. The fleet was launched as soon as tidal conditions permitted with the hope of completing two or possibly three races that day. For four of the six sailors this was their first racing since 2019. Val Millward and Graham Hall had, however, been able to race earlier in the season at Rutland Sailing Club.

During race 1 Val made a great start and took the lead round the first marker buoy but thereafter she was overtaken by Graham who never looked back, keeping his lead throughout the three lap race. Val came a comfortable second, Duncan

Greenhalgh third and Stephen Thomas Bate fourth. Race 2 once more saw Val and Graham competing very closely indeed, but at the end Graham again came out on top with Val a closely run second. Duncan came third and John McPartlin, with his best race of the day, fourth. The Race officer then decided that he could squeeze in a single lap race 3. After a difficult start for both Val and Graham they still overtook the rest of the fleet with Val emerging victorious and Graham second. Duncan was third.

After some clever windward sailing Stephen Laycock came fourth. Overall, at the end of day one, Graham had a slender lead followed by Val with Duncan in a comfortable third. The remaining three sailors were also closely separated by only one point each. To round off the afternoon a delicious high tea was served by the Solway Yacht Club in the afternoon sunshine on the lawn of its pier.

Covid restrictions prevented the usual regatta dinner in Kippford Village Hall but the Club had reserved a number socially spaced tables in the Mariner Hotel where the competitors not only had an excellent evening meal but a convivial social time together.

Although the weather forecast for Sunday had predicted a better south or southwesterly wind this never really kicked in. Race 4 was therefore more testing but as on Saturday there was another one, two, three for Graham, Val and Duncan. Stephen Thomas Bate came in fourth. Race 5 had the best of the wind that day, this time with Val coming out on top, Graham second and Duncan third. Race 6 saw much jockeying for position on the start line and a lot of to and fro during the race itself ending up with Duncan first, Graham second and Val third.

Prize giving took place over another excellent high tea on the lawn. Graham is the new Scottish champion and was presented with the Sandiman trophy. Val was second and was also presented with the trophy for the first (and only) lady helm.

Duncan was third and also won the Clyde Cruising Club Challenger Trophy for winner of the last race.

Thanks were given by all concerned to Chris Nurney, the event organizer, Willie Patterson and Stewart Biggar, Race Officers, and the safety boat crews for both days. Also to Mary Dinwiddie, Deirdre Harding, Maureen Scott and Val Broadbent for their excellent catering. Robert Dinwiddie (Commodore) and all at the Solway Yacht Club, particularly those who just happened to be in the dingy park when help was needed in pulling the Challenger dinghies out of the water and up onto the pier.

All in all an excellent regatta and in the words of John McPartlin “It was like sailing on the Mediterranean” with the sun and the warm temperatures.