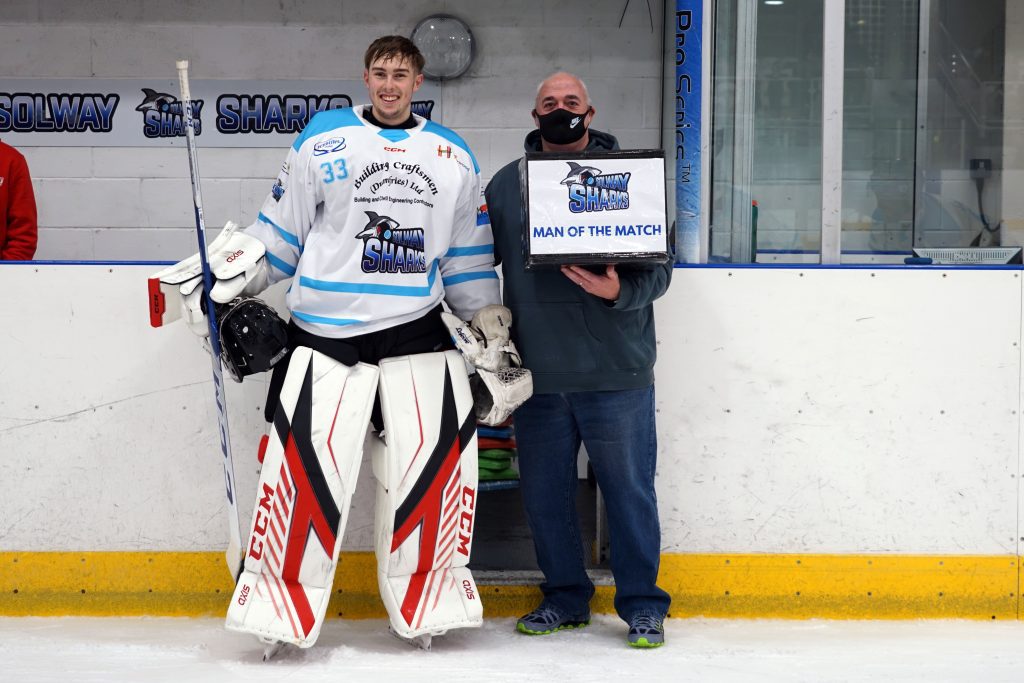 The Dumfries Building Craftsmen Solway Sharks welcomed Blackburn Hawks on Saturday night, in only their second meeting of the season, and the first at Dumfries Ice Bowl.   At Blackburn in September it was a close 5-4 game, the Sharks’ winning goal being scored with 2 seconds left on the clock.

It was Hawks who took the early lead in the game, Ronnie Grimes putting the visitors ahead after just 4 minutes.  Sharks were prompted into action, and 2 minutes later drew level through a powerplay opportunity, Ruairi Lockerbie feeding the puck to Christian Johnson who picked out Kell Beattie in space at the hash marks, the youngster beating Michael Rogers in Hawks net for his first NIHL goal.  With momentum in their favour Sharks piled on the pressure, and captain Struan Tonnar added to the goal tally at 8:00 with a fine unassisted coast-to-coast effort to put his team in front.  Tonnar added another at 12:02, scoring from right in front of the net after smart work from Lockerbie and Andy Craik.  The goal-fest continued at 16:34 when Peter Gapa made a run on net, switching the puck to Scott Crane who slotted it past Rogers to add another.  Seconds later Iain Bowie found the net, Johnson feeding Lewis Houston, his shot rebounding nicely for Bowie to shoot home.  The score at end of the first sat at Sharks 5 Hawks 1.

The second period started with a change of netminder for Sharks, Calum Hepburn making way for Euan Simpson in his first Sharks game between the pipes.  There was end to end play in the second, but Sharks earlier dominance seemed to be lacking, and the only goal of the period came for Hawks at 28:07 courtesy of Petr Valusiak.  After some physical play there was a skirmish between Ross Murray and Tom Revesz as the end of the period approached, which entertained the crowd.  The score as the buzzer sounded for the second break was Sharks 5 Hawks 2.

The third saw Sharks again take control of the game, a delayed penalty at 54:51 giving them a scoring opportunity, smart passing between Liam Stenton and Stuart Kerr seeing the latter send a rocket to the top of the net for the Sharks’ sixth of the game.  With their tails up Sharks continued to surge forward, and another goal followed, Gapa and Scott Henderson moving the puck well to Hawks net, Tonnar with the final shot for his hat-trick goal at 58:09.  In the dying seconds of the game a nice 1-2 move between Kerr and Houston saw Bowie with the final strike of the game at 59:32.  The final result was Sharks 8 Hawks 2, and Euan Simpson was Sharks’ man of the match.

Coach Martin Grubb told us after the game, “We started well and got comfortably ahead in the first and to be honest I think that was the worst thing that happened to us.  We switched off a bit in the second, and we knew Blackburn would work hard and be physical and that is what happened.  Euan stood up well and made some great saves in his first game for us, but he shouldn’t have been under that much pressure.  The third was a bit stuffy for a while but then we again showed our quality. I like us when we play with speed and skill and move the puck and when we did that I thought we were good.  We need to find a way to stick to our style of play, but lots of positives to take from the game, and another two league points secured.”

Sharks are back in action on Saturday night at 7pm, facing Widnes Wild in the first leg of the Cup semi-final, the second game in Widnes on Sunday, with a place in the final at stake.  The teams met in Widnes two weeks ago, a close 5-5 game that was settled in Sharks’ favour only after overtime and penalty shots.

Sharks will be missing three of their number at the weekend, with coach Martin Grubb, defenceman Liam Stenton and equipment manager Peam Stenton all on international World Championship duty in Romania with the Great Britain under 20s team.

Saturday night sees the Sharks “hurl a hug” event, with fans invited to bring along a new, bagged soft toy to hurl onto the ice, which will be passed onto children that are spending Christmas in hospital at DGRI.  There will be some soft toys available to purchase at the supporters club table on the night.