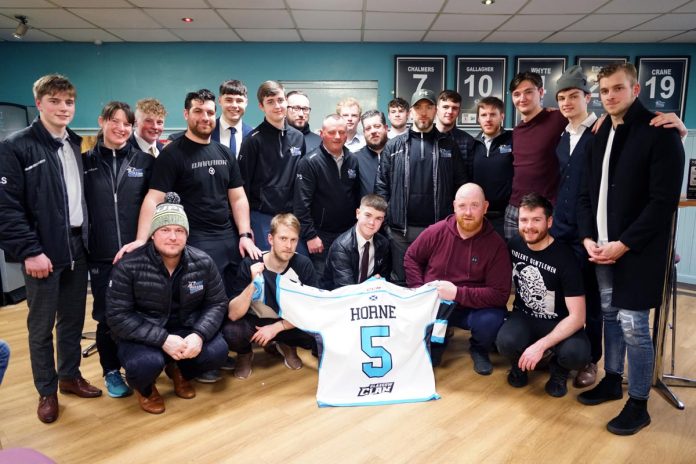 Scottish ice hockey icon Kyle Horne, who spent the latter part of his long career here in Dumfries playing with the Solway Sharks, has hung up his skates for the last time, announcing his retirement after what turned out to be the Sharks last game of the season.

Kyle retired after a 22 season British hockey career, which saw him ice in a total of 534 Elite League games, spending time with both the Fife Flyers and the now defunct Edinburgh Capitals.  He played for Fife for a total of 12 seasons, including their time in the BNL.  As well as making his mark domestically, Kyle also played for GB at U18, U20 and senior level over his career, with a U18 bronze medal and a senior silver medal to his credit.  After leaving Flyers in 2016 he had a year out of hockey, before joining the Sharks for their 2017-18 campaign, immediately fitting in as a key player and one of the “elder statesmen” of the team, providing mentoring and encouragement to the younger players.

With the season ending abruptly after their game against North Ayr on 15 March the Sharks said a low-key goodbye to Kyle after the game. He responded afterwards, saying, “I was a bit overwhelmed to speak at the reception you guys gave me even when it was last minute due to the circumstances. First off thanks to Martin who gave me another chance when I thought I was already finished playing, and to the rest of the Shark’s organisation for helping with accommodation and other things.  Thanks also to the guys and staff in the team (and girls).   All the boys in team have been great from the moment I arrived and there are great careers ahead of a number of you – keep up the hard work and have fun. It has been a pleasure and a privilege – to some of the older boys I would say play as long as you can, trust me on that!  To the fans, you have been a pleasure to play in front of. It has also been fantastic to meet most of you, without you guys there would be no hockey at this level and it has been an honour to play for you.”

Sharks head coach Martin Grubb said, “On behalf of the Solway Sharks I would like to wish Kyle all the best in his retirement and hope he is not a stranger to the game or the ice bowl. I have had the pleasure of knowing Kyle pretty much all his hockey life and watched as he developed into one of the best Scottish defensemen of the modern era. When his elite career ended through injury I spoke to him and was delighted to be able to bring him to the Sharks as I knew he could still offer us so much and would be a huge influence on our younger players.  I think we were lucky to have him here and we will reap the benefits of the knowledge he passes on to our younger guys for years to come. Kyle was someone who sees the ice so well and could read a game better than most, his ability on and off the puck was still there right till his last game and he would still pop up with valuable goals and his personality and experience will be missed in the dressing room.

I am sure he will relish spending time with his family now and I know they are all very proud of him and his achievements as are all of us at the club and we wish them all every success in the future.”

Aug 15, 2020
From August 14th 2020  it is mandatory for hospitality settings to collect the contact details of visitors to their premises in support of Test...

The Scottish Agri Food Sector Is Set To Go Into Recession

ROUND UP OF WORKS ON THE M6 – Cumbria/north Lancashire...

Have Your Say About Affordable Housing In Penpont, Keir & Tynron