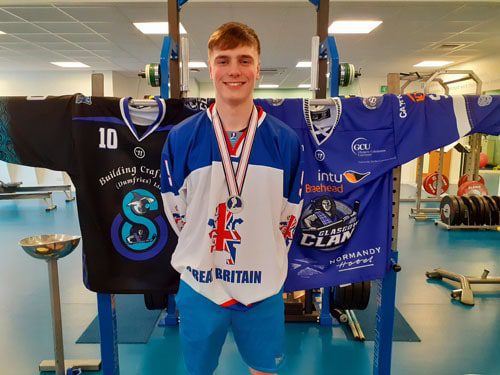 A Dumfries and Galloway College student has won a silver medal as part of Team GB at the 2020 Ice Hockey U20 World Championships played in Lithuania.

Liam Stenton, 18, is a student on the Performance Athlete Education Programme which fits perfectly with his journey to becoming a professional athlete.

Liam, who trains at Synergy Performance in Dumfries, was part of the British team who came a close second in the round robin tournament.

When not playing for Great Britain, Liam plays for the South of Scotland team the Solway Sharks in the EIHL (English Ice Hockey League), who are also a feeder for the EIHL (Elite Ice Hockey League) team Glasgow Clan, for whom he recently earned his first league point for an assisted goal.

Dumfries and Galloway College is committed to providing its students with courses that fit with their needs and ambitions and the entire college community will be cheering on Liam as he moves forward in his career.

“Liam is a dedicated and hardworking young man, both on and off the ice, and all of us at Dumfries and Galloway College could not be prouder of him.

“We are delighted that our Performance Athlete Education Programme has helped Liam get to this stage of his career and we’re sure the skills and experience he has gained throughout it will stand him in good stead for the future.

“Liam should be delighted to have brought home this silver medal and we’re quite sure it won’t be the last medal he’ll win.”

“As a hockey fan myself, I watch Liam most weekends when he plays for the Solway Sharks or the Glasgow Clan.

“He is a hardworking and skilled defenceman and is a great player to watch.

“All of us at the college congratulate him on his achievements this year and wish him all the best for the future.”

“We’re all really happy for Liam and his teammates.

“His work ethic for such a young man is the main reason for his success along with his willingness to be coached.

“Liam has the potential to do great things in the sport of ice hockey and anything else he puts his mind to.