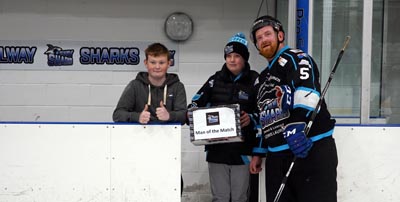 The Building Craftsmen Dumfries Solway Sharks faced North Ayrshire Wild in two games over the weekend, in their bid to progress past the qualifying stages of the Scottish National League playoffs.

Travelling to Auchenharvie on Saturday, the Sharks skated out fast and immediately put Wild under pressure, pinning them in the defensive zone for long spells.  There were lots of shots on Wild goal, Scott Beveridge kept busy making athletic saves and stopping a total of 24 shots from the Sharks, while Gary Russell had a considerably quieter time the Sharks net, turning away shots with confidence when called upon.  At the end of a busy period of fast hockey there was still no score, and the teams went into the first break even.

Sharks seemed to find another gear in the second, and after more attacks on the Wild defence it was Peter Gapa who broke the deadlock, a fast rush on goal from him and Scott Henderson seeing the goal slotted home at 23:59.  After more pressure Liam Stenton added another on the halfway mark, passes from Gapa and Ewan Anderson finding him open at the back door.  Finding their rhythm Sharks kept adding, Gapa striking again at 33:36 from Andrew Craik and Henderson to make it 3 – 0.  Finding themselves on the powerplay Sharks took full advantage, Kyle Horne collecting the puck from a Gary Russell clearance, and feeding it to Struan Tonnar who sent it over Beveridge with a backhand flick to make it 4.  As the period drew to a close Michael Thomson sent Viktor Nestrasil netward, and he picked out Marcus Murdoch coming in fast on goal, who found the net with 13 seconds to play.  At the second break the score was Wild 0 Sharks 5.

Comfortably ahead at the start of the third the Sharks added to the score after 2 minutes, Nestrasil passing to Murdoch who found Iain Bowie who made no mistake sinking the puck for the 6th.  Wild, however, were not done, and rallied, keeping the Sharks at bay for a spell.  Kyle Horne added another at 52:38 with a rocket from the point, before Scott Rae fed the puck to Gap who went round the back of the net and slipped it under Beveridge for a wraparound goal at 54:08.  The goalfest continued when Sharks went on the powerplay again minutes later, Stuart Kerr passing to Liam Stenton who shot from the point, his turned away shot collected and sent home by Murdoch at 55:33.  Andy Craik added another at 58:05, his shot from Tonnar and Horne bouncing over Beveridge and into the net.  The final goal of the game went to Nestrsil at 58:38, from Murdoch and Kerr.  The final score was Wild 0 Sharks 11, and Kieran Hair was Sharks man of the match.

After the game Martin Grubb commented, “We started the game with plenty of possession but in the first period we were a bit wasteful with our scoring chances and their goalie made some very good saves.

We spoke about being patient and keeping on doing the right things at the first intermission and we did just that as we moved the puck around and continued to create chances and grabbed a few goals. With it being a two leg affair we wanted to make sure we finished the first leg strong as we knew North Ayr would keep coming and working hard and I liked the way we showed our composure in the third and scored some really nice goals to ensure we had a comfortable lead for the return leg.”

Sunday saw Wild come to the ice bowl for the return fixture, and again Sharks were the dominant team, although Wild were determined not to make it easy for them.  After a spell of back and forth play Scott Henderson was first to find the net, taking a pass from Peter Gapa and slotting it home at 7:58.  There were numerous chances at both ends of ice throughout the rest of the first period to keep the crowd entertained, but no further scoring, and the first break saw the Sharks with a 1 – 0 advantage.

The second saw the Sharks on the offensive again, Kyle Horne finding Iain Bowie who found Viktor Nestrasil who found the net for the second at 22:34.  A few minutes later Nestrasil and Bowie combined again, the former with the final strike to make it 3 – 0.  Towards the end of the period there was another, Nestrasil with his third at 38:52, on the end of smart passes from Bowie and Scott Rae.  Going into the second break the score sat at Sharks 4 Wild 0.

A quieter start to the third period saw Wild contain the Sharks for a spell, and the play went from end to end.  It was as the end of the game approached that the next goal came, Horne taking advantage of a powerplay and sending the puck to Steven Adams who found Bowie who found the net at 57:05.  Marcus Murdoch scored the last goal of the game at 58:50, from Nestrasil.  The final score was 6 -0 (aggregate 17 -0) to Sharks.  Kyle Horne was Sharks’ man of the match.

Afterwards coach Martin Grubb told us, “The build up to this game was a little different and felt strange given the current situation everyone finds themselves in, and add to that an 11 goal lead it was easy to see why we never hit top gear.  We dominated possession all game and created some good chances while limiting their chances and again we scored some nice goals and we were able to roll our whole roster to make sure everyone tasted playoff hockey and we got the job done. It wasn’t our greatest performance but it was important to make sure we won the game comfortably and reward our supporters as they were great all weekend both home and away and we wanted to qualify for the final four weekend for them.”