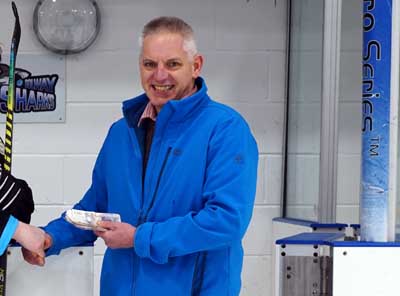 With the Building Craftsmen Dumfries Solway Sharks facing an abrupt and premature end to their season, and no word yet on an expected date for the new season to resume, we caught up with club Chairman Ian Bryden, who shared his thoughts with us.

“It was only when I took the time to think about the last season that I fully realised the magnitude of the change and adversity that we have encountered along the way. Certainly a year ago no one could foresee what was about to unfold for Solway Sharks.  For season 2019 -20 the EHIA allowed a number of teams to form a new National League. This meant that there were only 7 teams left to compete in the NIHL (North), with some of these not wishing to compete in the cup competition. At this stage it was really difficult to see how we were going to get enough competitive games to fill a fixture list for the season so the Sharks Board took a decision to enter the team in the NIHL, the NIHL (North Cup) and also the SNL.  We hoped to pull together a large squad with the more experienced players competing in the EIHA set up and less experienced players getting a chance to develop in the SNL.

Shortly thereafter Leeds were given a franchise to enter a completely new team straight into the new National league and they went off on a recruitment drive. It is testament as to how close we had competed with the “bigger” teams in the previous season that a number of former Sharks were lured to make up the core of the Leeds team.  Solway Sharks are first and foremost a development team and although it is never nice to lose players it is really pleasing that the majority of them were able to advance their careers at a higher level. All in all we ended up losing over a dozen first team players from the previous year’s lines.

There were also changes in the committee with Elaine Johnston and Rab Murray resigning. I would like to take this opportunity to thank them for their dedication, commitment and support to Solway Sharks over many years.

Raymond Boyd and Michelle Mitchell joined the committee and Stuart Brown was invited to join and take forward the Supporters Club and game night fundraising.  The coaching staff of head coach Martin Grubb and Jamie Thomson worked really hard signing players to pull together a squad and then to get them playing as a team.  In the meantime the committee were hard at work getting the mechanism in place to keep the team on the ice.

Our first competitive game was way back on 31st August 2019 against Belfast and the fixture list to accommodate both leagues was such that we played virtually two games a weekend for the entire season.  Where the team lacked experience it made up for it in fast and skilful skating. We went on to win the SNL league championship without dropping a single point along the way. The “experts” forecast that the Sharks would struggle in the NIHL with us expected to be fighting it out at the wrong end of the table. It was therefore great to defy the odds and start to take points from all of the so called bigger and better teams. As the season drew on the lack of depth and punishing fixture list started to take its toll and we suffered a few inevitable defeats which ended our cup run, a classic semi seeing us lose out to  Murrayfield Racers who went on to claim the NIHL North Cup crown.  We did however finish a credible second in the NIHL North league, which is a great achievement.

Our final NIHL home game against Whitley Warriors, which should have been a celebration of entertaining ice-hockey between the two best teams in the League, descended into a farce with Whitley losing their discipline and their coaching staff pulling their net-minder off the ice with 17 minutes to play. This destroyed any semblance of competitive ice-hockey or sportsmanship and completely destroyed the game as a spectacle. I appreciate that fans pay good money to come and watch competitive ice-hockey and I can therefore only apologise on behalf of the Club for the actions of others on that particular evening.

As the playoffs loomed close so did the advance of the dreaded Corona Virus. With each passing day the news got worse and the restrictions on events and social gatherings started to ratchet up.

Our SNL playoff home game against North Ayrshire Wild became our last as all competitions were abruptly halted as unprecedented social distancing measures were imposed. It was therefore fitting that our Honorary Chairman Les Maxwell was able to present the team with the SNL league championship cup that evening – and the celebrations took a bittersweet turn as it turned out to be the final game for club stalwart Kyle Horne, who announced his retirement after lifting the trophy

So there is to be no trip this year to either Dundee or Sheffield for the playoff finals and “Owned and Loaned” and awards evenings have had to be postponed. There is clearly a great deal of uncertainty in society at the moment and we have no idea when things will return to any of degree of normality. We will however be ready to welcome you all back to the Shark Tank when ice hockey is able to resume.

My thanks go to everyone associated with the club whether as a player, coach, official, volunteer, sponsor or fan. Without your support there is no Solway Sharks, and we look forward to seeing you all back and delivering another season of entertaining ice hockey.  In the meantime we will be looking to the future, and starting to look toward the new season, whenever it may start. To all of you my final plea is to please heed the advice and stay safe over the coming weeks and months.”