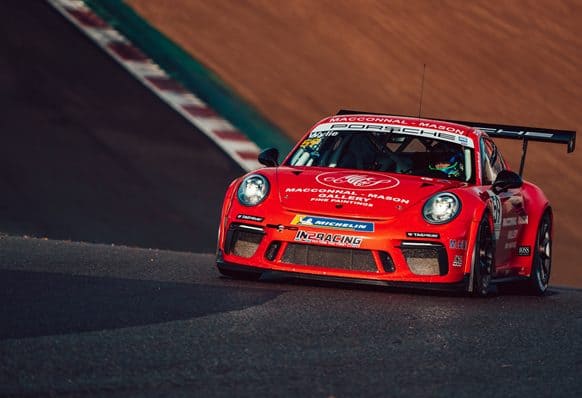 Dumfries and Galloway’s Ross Wylie brought the curtain down on a successful motor racing season at Brands Hatch last weekend (14-15 Nov) – a condensed 2020 campaign that the Thornhill ace can look back on with pride.

The 29-year-old from Thornhill near Dumfries finished sixth and fifth in the final two rounds of the Porsche Carrera Cup GB at Brands. Ross started the opening 30-minute race from 11th on the 18-car grid in his MacConnal-Mason Gallery supported Porsche 911 GT3. Wylie spectacularly sliced his way through to sixth-place at the chequered flag following 32-laps around the treacherously wet and slippery 1.2-mile “Indy” circuit on Saturday. The following day, Ross impressively claimed fifth place in the dry.

Ross’s latest top-six finishes earned the Scotsman a final seventh placing in the series, despite him being at a significant disadvantage as the only single-car entry in Pro category, scoring eight top-six overall placings – including one win in his In2 Racing entered Porsche. Despite Wylie’s racing year not beginning until mid-July due to the Coronavirus delaying the start of the motor racing season, he nevertheless crammed in a total of 25 races over the past five months.

Wylie claimed Dunlop Britcar Endurance Championship class honours for a third time in the last four years, losing out on a second overall championship by a mere five-points despite missing four of this year’s 10 races. Partnered by Paul Bailey in a SB Race Engineering Ferrari 488 Challenge car, Ross netted six top-three class finishes – including three wins – plus four fastest race laps from six race starts. Ross also contested a GT Cup and British GT Championship race, both events in a Simon Green Motorsport Ferrari 488 Challenge, claiming a class win and fastest lap in the former and fourth in class, from “pole”, in the BGT event.

Ross Wylie (GB):
Age 29. Born & Lives Thornhill nr Dumfries, Scotland:
“We crammed a lot of racing into the past five months which has been pretty crazy. It’s been cool racing on many back-to-back weekends and in different championships. Winning a Britcar class title again was very satisfying, especially as it was with another new team-mate in Paul (Bailey). My Carrera Cup season was a bit up and down but I’m proud to have won a race and to have claimed a podium at my ‘home’ Knockhill circuit. Racing different cars and adapting to them is something I’ve always enjoyed doing – it’s a challenge I hope to face in the future. It’s now time for a rest and thinking about what I’ll do in 2021.”