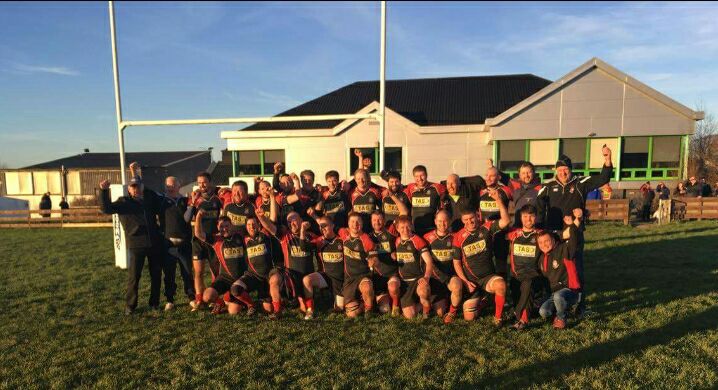 Stewartry kicked off. Cambuslang, took the ball and were quick to attack up the left side to go in at the corner. But the referee ruled a foot was in touch. From the lineout  Stewartry took the ball but the home side gave away a penalty taking the Blacks up to their 22.

McCulloch took possession in the lineout allowing Mosey to kick up to halfway where Cambuslang were penalised for not releasing. Chat to the referee lost them another 10 metres allowing Mosey to take the 3 points.

From the 22 drop out the hosts moved up the right side cutting through loose tackles but the ball went forward on their 22 where Stewartry gave away a penalty allowing the home side to level the score.

Moving into the second quarter the Blacks got into the home 22 where Cambuslang gave away a penalty for a high tackle. Once more Mosey slotted the 18 metre kick to put Stewartry back in the lead.

Two minutes later from a Cambuslang scrum on the Stewartry 22 the ball went to their back line for their outside centre to take crash ball at pace. He crashed through the Blacks defence to touch down under the cross bar. He added the extras to give the hosts a 4 point advantage.

Stewartry infringed in a scrum giving  Cambuslang  a penalty. They charged up the right side but the Blacks defence stopped them short. The hosts went offside giving the Blacks a lineout.

McCulloch took the ball sending it to Mosey who booted it down to the home 22. Cambuslang fumbled the catch with the ball going loose. Andrew Kerr was on it quickly making more ground but it went forward.

After the scrum Stewartry got a penalty on the home 22  Taking a quick tap they went up the right wing but were penalised for crossing 7 metres from the home line allowing Cambuslang to clear down field.

In a lineout on halfway, again McCulloch secured the ball to send it to the back line. Austin chipped it  over the home defence. As the Cambuslang full back picked up Austin tackled and the home defender gave away a penalty for holding on.

Mosey kicked for a 5 metre lineout. Once more McCulloch did the business to secure clean possession allowing the Stewartry pack to drive for the line.

The momentum took them over with John Kerr getting the try.. Mosey slotted the conversion two minutes from the break.

From the restart Cambuslang got a turnover allowing them to attack left, going round  Stewartry defenders and in for a try under the crossbar. They added the extras with last kick of the first period. Cambuslang 17  Stewartry 13.

Four minutes into the second half Stewartry were again in enemy territory with Andrew Kerr getting into the home 22 where Cambuslang were penalised for a high tackle. Mosey took the points to narrow the gap to 1 point.

In the seventh minute Stewartry went down to 14 men when Cannon was unlucky to be yellow carded for a scummage offence.

After a penalty inside their own 22  Muir charged up the left side with Carson on his shoulder. Carson got into the home 22 but was stopped.  Great support from John Kerr gave the Blacks a turnover but the ball went forward. Broll came into the scrum.

With Cambuslang offside again Mosey kicked forward to the home 22.. Once more superb work in the lineout saw the Stewartry pack drive toward the try line. Home players took the maul down giving the Blacks a penalty and 5 metre lineout..

Again Stewartry secured the ball to drive over but the ball was held up.  Cambuslang cleared it back to their 22 from the 5 metre scrum.

Another McCulloch catch in the lineout sent the ball to Muir who got stopped on the 22 and the ball went forward. Cambuslang took the ball in the scrum but the Blacks managed a turnover,

Once more Muir got inside the home 22 but was stopped. Great support by Austin and Milligan took the Blacks closer to the home line but the ball went into touch.

McCulloch stole the Cambuslang throw in giving the ball to Porteous who powered to the line but he was stopped half a metre short. Once more John Kerr was there to pick up and touch down. Mosey added the conversion.

With fifteen minutes left both sides kept up the pressure. Cambuslang got a lineout 8 metres from the Stewartry line and again McCulloch spoiled.allowing them to get back to halfway.

Home players went offside giving the Blacks a penalty on their own 10 metre line. From the lineout the Blacks clearing kick didn’t find touch.. Cambuslang went on the attack up the right side but were stopped on the 22.

Ten minutes from time Thomson replaced Burton.  With 4 minutes left at a scrum on the Blacks 22 Cambuslang took the ball to attack up the right side.pressing for the Stewartry try line but the ball went forward 10 metres out.

Once more the home pack took the ball in the scrum to go right putting serious pressure on the Stewartry defence. But Cambuslang couldn’t break through and gave away a penalty for handling in the ruck.. The last kick allowed the Blacks to clear their line and get the well deserved win and a 23 – 17

This was a historic win for Stewartry who played well against tough opposition who were not going to give up their position in the league easily.