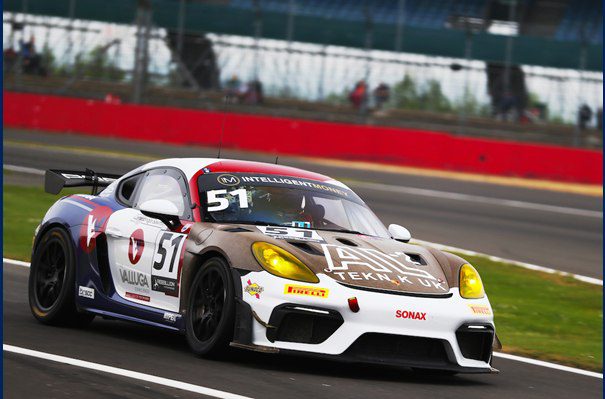 The duo, contesting the GT4S category, were sharing driving duties of the AL-2 Teknik UK supported Porsche for the first time.

Wylie, from Thornhill near Dumfries, started the three-hour race from fourth in the GT4S class in the 34-car field. Ross set a searing pace and claimed the class lead at the end of the first hour of racing.

Wylie was briefly back behind the wheel of the striking liveried Porsche before making a final compulsory pit-stop, switching back to Graham with 30mins remaining who re-joined sixth in class, Matty recording an excellent third place at the chequered flag – demoted from second with just five minutes remaining.

However, after time penalties had been applied from the previous races, the Wylie/Graham Porsche was classified second in GT4S and a brilliant third overall in GT4. In addition to AL-2 Teknik UK support, NGE PyroDry plus Carronbridge Sawmill (Thornhill) are also partners. Round 4 is at Donington Park on 29 May.

“For Matty and I to finish second in our first BGT together with the Valluga Porsche in the colours of AL-2 Teknik UK for the first time, was a massive achievement. I really enjoyed sharing the car with Matty, he is a delight to work with and a real talent behind the wheel.

“The guys at Valluga did a great job for both of us: faultless pit-stops, great race strategy and giving us a strong and fast car. It was hard work and very hot in the car for my first stint, the air con wasn’t working. It was good fun but pretty exhausting. I’m already looking forward to the next Donington event in a few weeks.”

“I got everything I wanted from today’s race – second-place is so good and I can’t thank everyone enough – Ross, the Valluga team and of course, AL-2 Teknik UK, because without its support, I wouldn’t be in the Porsche!

“Driving it for the first time was a steep learning curve but I couldn’t be happier. We can all be very proud of what we achieved. My first stint was a long one and very hot work. We were battling the entire race. Roll on Donington!”