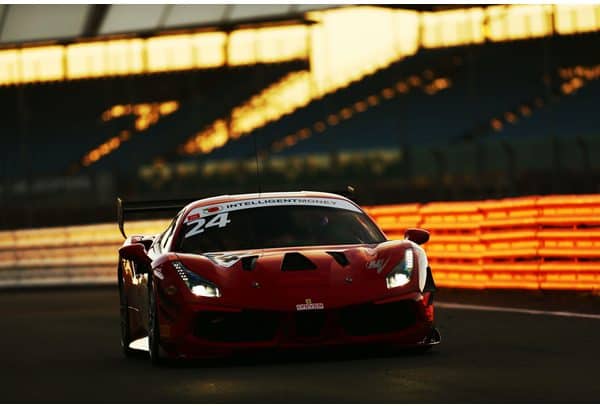 Ross Wylie heads to Brands Hatch next weekend (14-15 Nov) for the final two rounds of the Porsche Carrera Cup GB. The Dumfries driver has recorded seven top-six placings, including a win at Thruxton, in the previous 14 races.

Luck was not on the side of the Scotsman in his British GT Championship return at Silverstone last weekend (8 Nov). Having set the fastest time in the GTC class, Wylie combined with co-driver Lucky Khera to claim class pole-position in their Simon Green Motorsport Ferrari 488 Challenge car.

The Ferrari’s third driver, Lee Frost, started the 3hr race but after 30mins, when placed second, was hit by another car which was ultimately penalised for the optimistic manoeuvre. Five-laps were lost in the pits as a wishbone needed replacing dropping them to fifth.

2014 BGT GT4 champion Wylie, restricted to just 50mins in the Ferrari due to regulations, was behind the wheel with 80mins on the clock and immediately set a series of scintillatingly fast laps – often quicker than the class-leading car. Khera brought the car home fourth, just two laps from recovering to a podium placing. Ross Wylie (far right with Lee Frost & Lucky Khera) after qualifying in
pole-position:
“I’m bitterly disappointed to lose out on a very likely podium, if not victory, due to accident damage caused by a very optimistic overtaking manoeuvre. These things sometimes happen in racing so it’s a case of taking it on the chin but it’s particular galling as we had the pace to win. The Simon Green Motorsport guys did a great job, as they did all weekend, to get us back in the race but unfortunately we’d lost too much time. Focus now switches to the final Porsche races and finishing that series on a high.”