Ross Wylie brought the curtain down in style on what has been a fragmented yet very successful 2019 season by placing fifth in the final two Porsche Carrera Cup races at Brands Hatch yesterday (13 Oct). The 28-year-old from Thornhill near Dumfries was once again on top form at the Kent track driving the In2Racing 911 and is already optimistically looking ahead to a more stable and fruitful 2020 season.

Crucially supported by Black Bull Scotch Whisky and The Bell Group combined with Hall’s of Scotland plus Browns Food Group backing at Brands, the 2014 British GT4 champion was able to contest the final four races of the hotly-contested Porsche Carrera Cup. Despite his unfamiliarity with the tricky 911 GT3 Cup car, Ross remarkably claimed four top-five placings – including a stunning second place at Silverstone last month.

He was then invited to have a one-off GT Cup race with Richard Guy in August which resulted in a second in class on his series début before unexpectedly returning to the Porsche Carrera Cup last month – a series he contested in 2017. Wylie is now firmly focussed on getting a full-time “seat” for 2020 organised and his exceptional results this year in the three varied championships bodes well for the future. 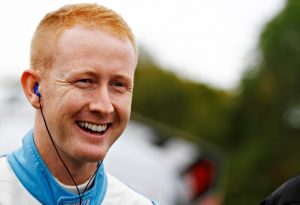 Ross Wylie (GB):
Age 28. Born & Lives Thornhill nr Dumfries, Scotland:
“It’s been a difficult year in some respects, through no fault of my own, but that’s how motor racing goes sometimes. Looking back on this year, I’ve driven in three different championships, at the wheel of two very different racecars, scoring 11 top-five class or overall finishes from 13 races which I can be very happy and proud of.

“As at Silverstone, we had another solid weekend at Brands to finish off the year in style. I qualified sixth in a wet session, P2 was likely but I was caught out by numerous Red Flag stoppages near the end of the session. The first race on Sunday morning was on a damp track and I took the chequered flag fifth. I started Race 2 from ‘pole’ and again finished fifth which is probably where we deserved to be in the dry conditions. I’d hoped for Knockhill weather, i.e. rain, but it didn’t happen and our car didn’t have the ultimate pace of the top-four in the dry.

“Silverstone and Brands have been a good way to end off the season but without the support of Black Bull Whisky, The Bell Group, Hall’s of Scotland plus Browns Food Group, I wouldn’t have been on the grid. And of course a huge thank you to In2Racing for the last minute opportunity to race with them, they provided me with an awesome car and a good time.

“Now it’s full speed ahead off track as I attempt to secure a drive for 2020. Ideally I’d like to get everything in place by Christmas and the New Year. I’m already talking to interested parties concerning some exciting projects but this sport as taught me that nothing is final until the ink is dry on the contract!”