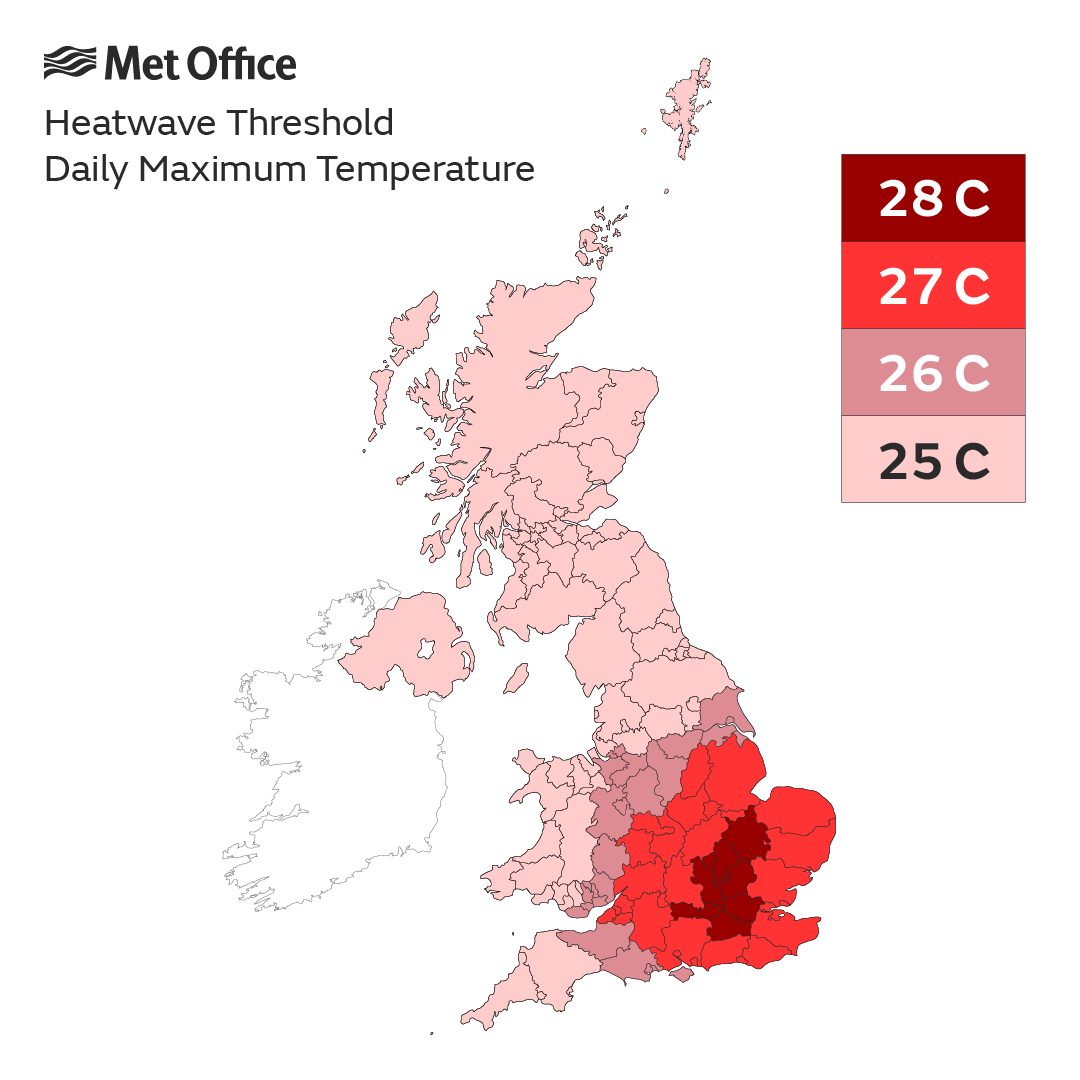 Temperatures are forecast to build this week, with heatwave thresholds likely to be met for much of the UK, particularly England and Wales.

The heat will build through the week, likely peaking on Friday and Saturday thanks to the influence of high pressure. Temperatures are likely to rise into the low-to-mid 30s Celsius for central and southern areas of the UK. However, temperatures are not expected to be as extreme as those experienced in July when new national records were set.

Away from the highest temperatures expected in central and southern areas, much of England and Wales, as well as the southeast of Scotland, could still see temperatures widely into the high 20s Celsius, with a chance of a few spots seeing temperatures into the low 30s.

Scotland and Northern Ireland will also see temperatures into the high 20s and could reach official heatwave criteria by Friday.

Met Office Deputy Chief Meteorologist Tony Wardle said: “Heatwave criteria look likely to be met for large areas of the UK later this week, with the hottest areas expected in central and southern England and Wales on Friday and Saturday. Temperatures could peak at 35C, or even an isolated 36C on Saturday.

“Elsewhere will see temperatures widely into the high 20s and low 30s Celsius later this week as temperatures build day-on-day through the week due to an area of high pressure extending over much of the UK.

“Coupled with the high daytime temperatures will be continued warm nights, with the mercury expected to drop to only around low 20s Celsius for some areas in the south.”

The UK Health Security Agency has issued a Level 3 Heat Health Alert for southern and central England, which is designed to help healthcare professional manage through periods of extreme weather. The Alert is in force from Tuesday through to Saturday, with the UKHSA advising people to look out for vulnerable people, including older people, young children and those with underlying health conditions.

“We want everyone to enjoy the warm weather safely when it arrives, but remember that heat can have a fast impact on health.

“It’s important to ensure that people who are more vulnerable – elderly people who live alone and people with underlying health conditions – are prepared for coping during the hot weather.

“The most important advice is to ensure they stay hydrated, keep cool and take steps to prevent their homes from overheating.”

Find tips for keeping cool in hot weather, as part of WeatherReady.

Little rain in the forecast

After the driest July in England since 1935, there’s little in the way of rain in the forecast, with only the northwest of the UK likely to see any short-lived showers, with details still being determined later in the weekend and into early next week.

Met Office Deputy Chief Meteorologist Tony Wardle said: “With high pressure dominant this week, the influence of any showers will be contained to the far northwest, and even here will be short-lived in nature.

“Further south, which has seen little rain for some time now, dryness will continue through the week and provide no relief for parched land, especially in the southeast.

“Some change to more unsettled conditions is then signalled but, as is often the case during the summer, details a week or more in advance of showers and rain are highly uncertain.”

You can find the latest forecast on our website, by following us on Twitter and Facebook, as well as on our mobile app which is available for iPhone from the App store and for Android from the Google Play store. Keep track of current weather warnings on the weather warning page.