With the Atlantic continuing to dominate the UK weather forecast, we can expect the rest of the month to remain unsettled with heavy rain and strong winds, interspersed with brighter periods.

Chief Meteorologist Andy Page said: “Until the end of October we are looking at an unsettled spell of typical autumnal weather which will dominate the forecast. Every year we expect the remnants of decaying tropical hurricanes to disrupt conditions when they enter the North Atlantic.

“The remnants of former Hurricane Epsilon have been subsumed into another deep area of low pressure to the south-west of Iceland, and although the low centre is a long way from our shores and won’t cause disruption, the trailing weather fronts associated with this system will bring wind and rain to the UK, along with a potentially heavy swell.

“However, it is rain rather than wind that will dominate our attention later in the week with a so-called ‘warm conveyor’ set up to bring a flow of very moist and warm air to the UK from further south in the Atlantic, triggering heavy rainfall for high ground in the west of the UK. We have issued a Yellow warning covering parts of Wales and North-west England for Thursday and Friday as additional rainfall in these areas may lead to impacts, including flooding. 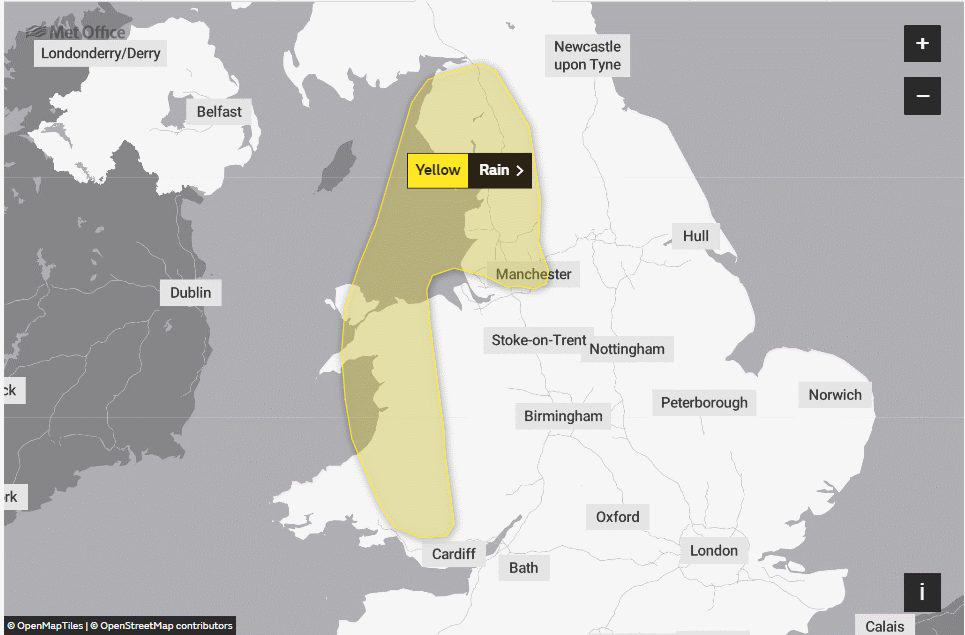 “Across the warning area accumulations of 30-40mm of rain can be expected, while isolated areas exposed the strong south-westerly winds could see 50-80mm. We expect the heaviest rainfall to occur in the mountains of Wales where some areas could witness 130mm of rainfall.”

At the weekend, the forecast is showing potential for the remnants of ex-hurricane Zeta to move into the North Atlantic, with the associated moisture being entrained into the Atlantic frontal systems, to again bring the potential for further heavy rain to parts of the UK later in the weekend and into early next week. However, confidence at this time range is fairly low for this aspect of the forecast.

Andy Page added: “We will continue to monitor the situation, issue warnings accordingly, and work with partners to provide advice to the public.”

You can check the latest weather warnings on our severe weather warnings pages and you can get the most accurate and up to date forecast for your area using our forecast pages and by following us on Twitter and Facebook, as well as using our mobile app which is available for iPhone from the App store and for Android from the Google Play store. Whatever the weather we are all being urged to remember the Government Coronavirus guidelines.