Efforts Stepped Up To Preserve Unique Ukrainian Chapel Near Lockerbie 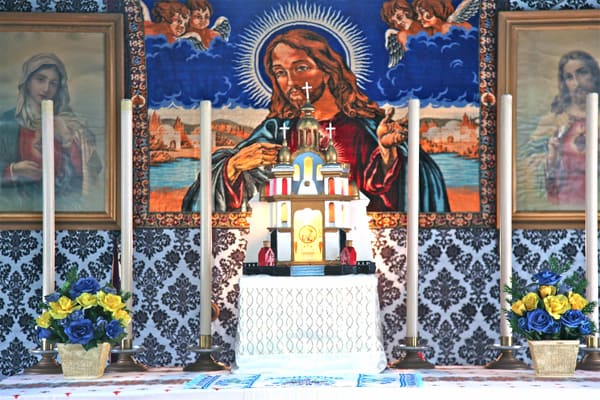 CHILDREN and grandchildren of Ukrainian prisoners-of-war (POWs), who made Scotland their home, are working to preserve their heritage.

They are raising money to enhance the Ukrainian Chapel at Hallmuir Camp, near Lockerbie and plan to create a small museum in the neighbouring building.

The group have carried out repairs and improvements to the fabric of the chapel and acquired a second original camp hut.

Dumfriesshire, Clydesdale and Tweeddale MP David Mundell, a native of the Lockerbie area, has followed progress at the site along with his son, local MSP Oliver Mundell.

David recently met with committee members at Hallmuir and presented them with a £100 cheque for their fundraising effort.

He said: “This is an interesting part of our area’s history and I’m pleased the chapel is being preserved.

“It looks like an ordinary camp building from the outside but step inside and you find a beautiful, colourful and atmospheric chapel, which was created by the POWs themselves.

“Many of the original residents married locally, raised families and became a valued part of the local community. Several made camp buildings their home for decades after the war.”

When the Ukrainians occupied the 40-hut camp on Castle Milk Estates at the end of World War Two most worked on local farms, in forestry and in later years some were employed at the Lockerbie cheese factory.

With the old Soviet Union then controlling their homeland in the post-war period, former POWs were unable to return and many made new lives in the UK and other western countries such as Canada and the USA.

Several services are held each year in the chapel attended by individuals and families with Ukrainian connections, some travelling long distances.