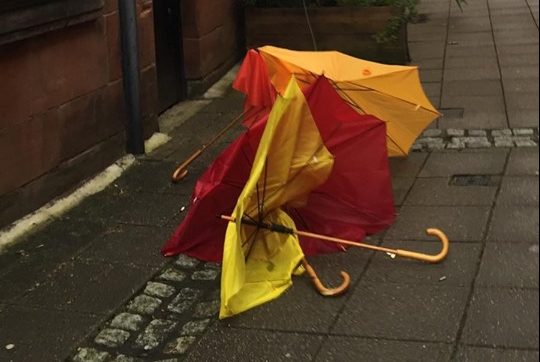 A Wonderful tempory art installation created and paid for by a local business in the centre of Dumfries has been vandalised over night.

The colourful display of umbrellas was an idea inspired by the Umbrella Project which originated in Portugal several years ago, but has spread to other European countries.

Mark Smith, from Kings Coffee and Books on Queensberry Street in the town centre, put the umbrellas up a couple of weeks ago to bring a bit of cheer to what has been a wet and drab end to the summer. Pictures of the umbrellas have gone viral on social media, and thousands of people visiting Dumfries have stopped to look up at them and enjoy the wee bit of shelter they create from the rain.

A disappointed Mr smith posted on facebook this morning Sunday the 13th of October “Crazy vandalism of our umbrella sky and planters in the early hours – caught on CCTV around 1.45am.” 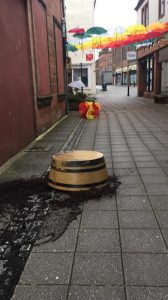 Mark told DGWGO “We have some CCTV footage taken from through the window. It’s a bit blurry but shows the vandals pulling down one of the wires at 10.15pm on Saturday the 12th of October. It looks like one of the group was filming what they were doing! The other footage at 1.45am this morning, Sunday the 13th of October shows some girls messing around with the broken umbrellas.”

Police Scotland have been informed, if you have any information that may help please call the police on 101.