Solway Sharks “Skate out of Darkness” To Support Mental Health 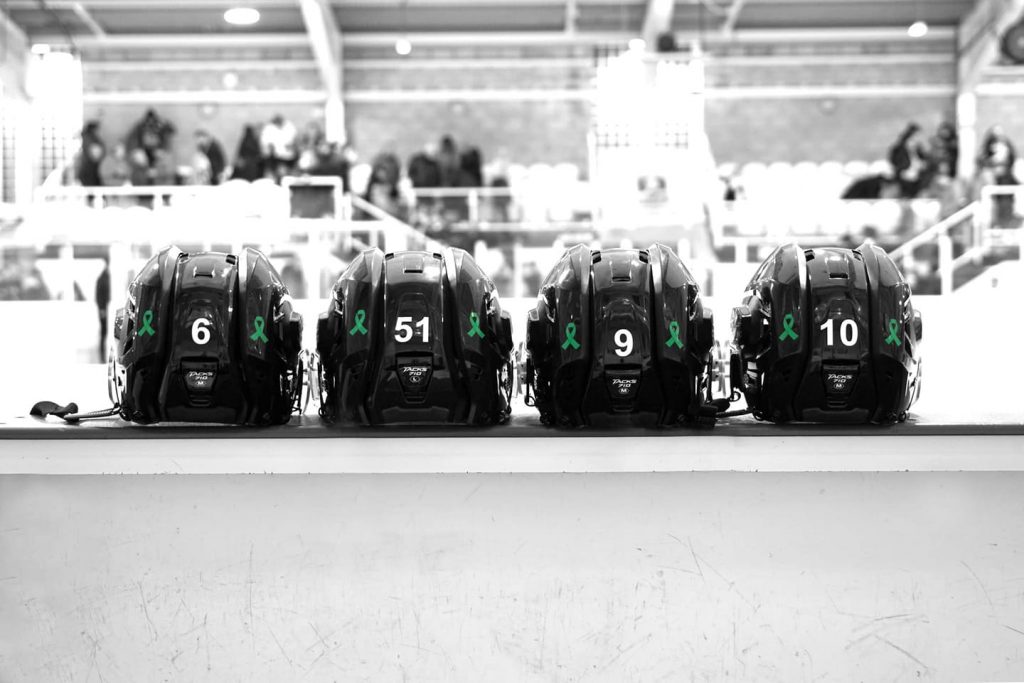 The Solway Sharks Ice Hockey Club are an Ice Hockey club that play out of Dumfries Ice Bowl and have achieved remarkable successes over recent years. They are a core part of the community in the South West of Scotland and pride themselves on being a friendly club that supports and develops people of all ages, but particularly youngsters.

This year the players themselves have decided to support the rising challenge, faced by many, of Mental Health. They have developed and started an initiative called “Skate out of Darkness”. Every single player in the team has been involved in this initiative. They have created a video (to be released in the coming week), with help from the local Samaritans, urging people to seek out support if they are feeling down or suicidal. There are T-shirts supporting this initiative, their helmets (a crucial element of kit for ice hockey players) proudly display a green ribbon to show support for mental health, they have changed their logo to a green ribband logo too.

The Captain of the club, Struan Tonnar, said “The idea of Skate out of Darkness, came from the players themselves. Almost every one of the players either knows of someone or has been affected themselves with mental health issues at some point. I’m proud to be a part of this group of players, both on, and off, the ice. They recognise that they can play a part, even a small part, in helping others. The help and guidance we have received from our local Samaritans branch has been invaluable, as they have helped us with the wording in our video and offered signposting for people who are in need of help too. I want to thank them for their support in getting this project off the ground.”

Struan went on to say. “Ice hockey itself is a great way to meet folks and the sense of camaraderie stays with you for a lifetime. The ice hockey “family” is renown worldwide, and we want to extend that into our community and support as many people as we can. The players and the club plan a number of events this year to promote good mental health, so I would ask everyone in the South West to look out for what we have planned and to support us, and the Samaritans, help others who might be struggling at this time.”.

The local branch of the Samaritans has a presence now at every Sharks home game, for fans to find out more and to get involved with Skate Out of Darkness.

The Head Coach of the Solway Sharks, Martin Grubb, said “I’m so proud of my players. This idea to support Mental Health has come entirely from them. They are aware that things have been tough for many over the period of lockdown especially. They are keen to make a difference and knowing these players, I know they will make a difference”.

Ann Stephenson, Director of Dumfries Samaritans said: “We are delighted to be working alongside Solway Sharks in this fantastic initiative. Suicide is the biggest killer of men aged 50 and under and three quarters of deaths by suicide are men. Our own research has found opportunities to help less well-off middle-aged men before they reach crisis point is often missed. We will have a range of resources available at all home games and our trained volunteers will also be on hand if anyone wants to talk to us privately and in confidence. Remember: When life is difficult, Samaritans are here – day or night, 365 days a year. You can call for free on 116 123, email at jo@samaritans.org, or visit samaritans.org to find more information and resources”.

The Sharks are currently playing extremely well on the ice just now, having just lost one game all season, and with a group of players that clearly have their community at their hearts too, it promises to be a season with a real purpose too, both on and off the ice.