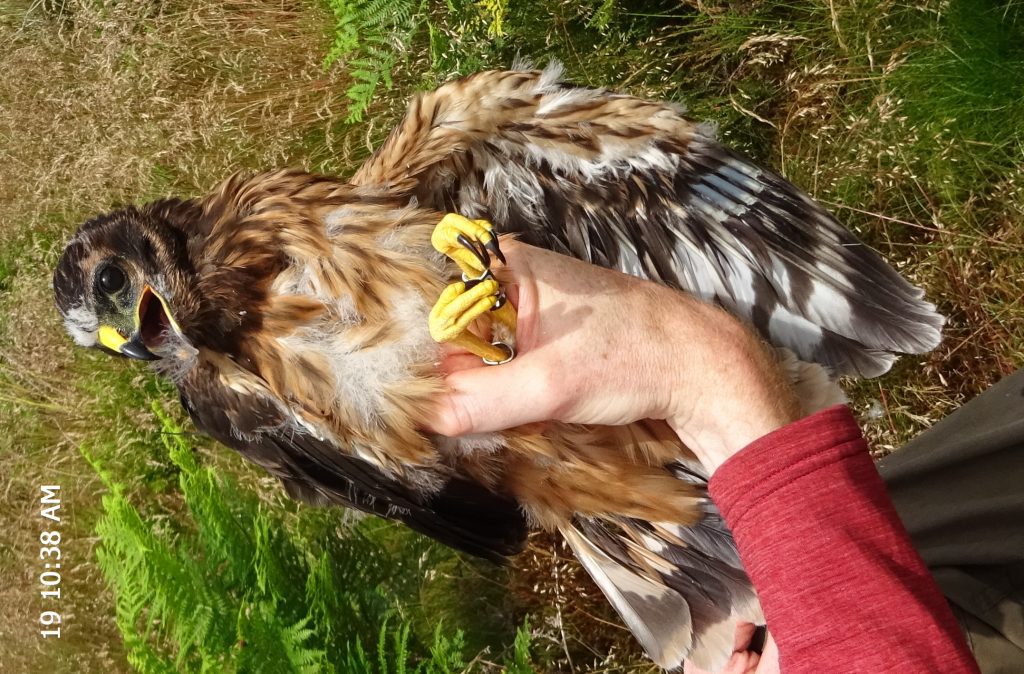 Another satellite tagged hen harrier has suddenly and unexpectedly disappeared, strengthening the RSPB’s call for the urgent licensing of grouse moors.

Reiver, a young female, fledged from a nest on Langholm Moor in the south of Scotland this summer. She was fitted with a satellite tag while still in her nest, as part of an RSPB project to help understand the journeys made by these red-listed birds of prey and the survival challenges they face after fledging.

Reiver’s tag was transmitting regularly and as expected, with no sign of malfunction, until it stopped suddenly on 17 September 2021. Her tag’s last fix came from Ninebanks, an area dominated by driven grouse moors in Northumberland, within the North Pennines Area of Outstanding Natural Beauty (AONB).

Reiver is the third Scottish satellite-tagged hen harrier to vanish in identical, sudden and suspicious circumstances in England in 2021. In February this year, Tarras disappeared having been last recorded in an area dominated by grouse moors near Haltwhistle, just outside the North Pennines AONB boundary. Another bird, Yarrow, from the Scottish Borders disappeared in April while heading for the North York Moors. And in 2019, Ada’s last transmission came from an area of grouse moor east of Allendale, Northumberland.

Fewer than 600 pairs of hen harriers breed in the UK. In England there were just 24 successful nests in 2021, despite enough habitat and food to support over 300 pairs. In 2019, the government’s own study found illegal killing to be the main factor limiting the recovery of the UK hen harrier population.

Jenny Barlow, Estate Manager at Langholm said: “There is always such anticipation and excitement for our hen harriers to return each year to the Tarras Valley Nature Reserve here in Langholm. A huge community and volunteer effort goes into monitoring and safeguarding our harrier chicks to make sure they get the best possible start on our reserve. It is extremely sad news for us all that one of our chicks Reiver, won’t be making her way back home to us again.”

All birds of prey are protected by the Wildlife and Countryside Act 1981. To intentionally kill or injure one is a criminal offence and could result in an unlimited fine or up to six months in jail.

If you have any information relating to this incident, call Northumbria Police on 101 quoting incident reference NP-20210920-0837.

If you find a wild bird of prey which you suspect has been illegally killed, please call 101 and fill in this online form: https://www.rspb.org.uk/our-work/our-positions-and-campaigns/positions/wildbirdslaw/reportform.aspx

If you have sensitive information about the illegal killing of birds of prey, call the RSPB’s confidential hotline on 0300 999 0101.