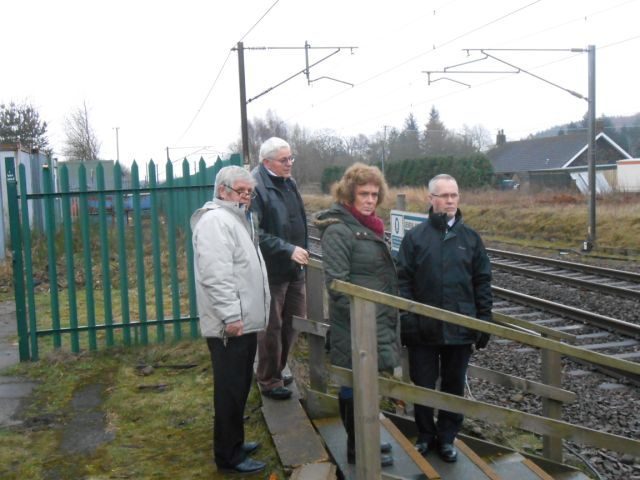 Dumfriesshire MSP Elaine Murray and Dumfries and Galloway MP Russell Brown met with the Beattock Station Action Group to discuss their campaign and proposals for the station.

Dr Murray and Mr Brown met with the group at the now closed station and heard the groups arguments for reopening the station as well as shown what the group want to do with the actual station itself if it is reopened.

The Beattock train station was closed in 1972 when the West Coast line was electrified and the action group was formed with express purpose of reopening the station.  The group believe that reopening the station will bring a number of economic benefits to the area and provide local communities with essential transport links. The group is also meeting with the Scotrail franchise bidders.  Dumfries and Galloway Council has put in a bid to the Scottish Government for funding to establish four new stations with the four stations being Thornhill, Eastriggs, Dunragit/Glenluce and Beattock.

“It was a good to have the opportunity to meet with the group and fully discuss with them their plans for the station.  You can see that they are passionate about the reopening the station. Clearly, the short term priority is to see improvements in service at Lockerbie station where frankly the services are getting worse not better. But the number of people using rail services is on the increase and if the Beattock campaign can convince operators to use a station there then there is no doubt there is a really good case to re-open the station.  I hope that the council’s bid to the Scottish Government’s Station fund is successful as reopening stations throughout the region will bring economic, social and environmental benefits to the area as well as improve the infrastructure of our region.”

“The group has real ambitious plans for the station and they have put a lot of effort into the campaign.  There is no denying that the reopening of the station could bring real benefits to the region.  More and more people are commuting to the central belt for employment, and Beattock is a station that would be used by people from across the area. It could also help boost tourism in the area.”

Notes to the editor