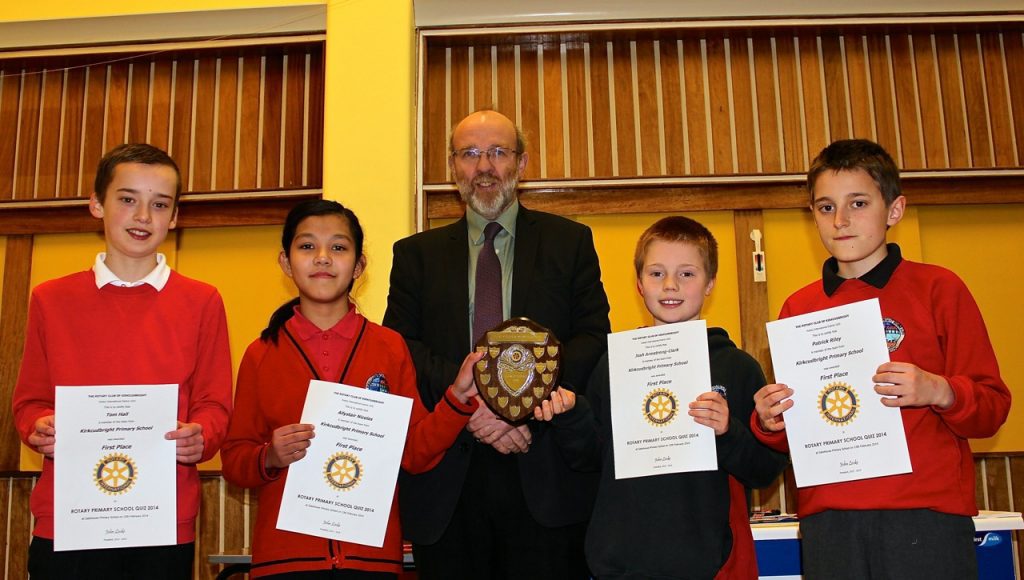 Last Thursday, Kirkcudbright Rotary Club once again held their annual general knowledge quiz at Gatehouse Primary School for four local primary school teams. Teams of four students from Borgue, Gatehouse, Kirkcudbright and Twynholm Primary schools were all competing in the first round of the . This District covers an area from North Berwick to Dumfries to Newton Stewart, and from Kilsyth to Jedburgh and Edinburgh.

In front of a sizeable audience of teachers, family, friends and Rotarians, Anne Halliday, last year’s President of Kirkcudbright Rotary Club told the students something about the work that Rotary do in aid of worthy causes. The competition then got underway with Question Master Paul Tebay asking questions on language and literature, maths and numeracy, health and well-being, expressive arts, science, technology, social studies and religious and moral education, and finally ’pot luck’. The five teams of students were each supported at their tables by a member of the Kirkcudbright Rotary Club. Their role was to help the students understand the questions, not to give them the answers!

At the end of what was a very keenly contested quiz, there were two teams, Kirkcudbright and Gatehouse tied on 43 points each. The quiz was then extended to include a tie break round after which the two schools were still level on points! The winning team was decided on the Ultimate Tie Breaker question ‘How many medals were won by UK athletes at the 2012 London Olympic Games?’ Kirkcudbright Primary School guessed closest so they will now go forward to the semi-final of the Rotary District 1020 Quiz and then, we hope, on to the final!

At the end of what was a very enjoyable evening, this year’s Kirkcudbright Rotary Club President Dr John Locke thanked all those who had helped to make the evening such a success and he made particular mention of all the young people who had taken part.  He then presented all these individual team members with certificates to recognise their achievement in representing their schools, and he then presented each member of the winning team with a winner’s certificate before presenting them with the Rotary Club of Kirkcudbright Primary Schools’ Quiz Shield.