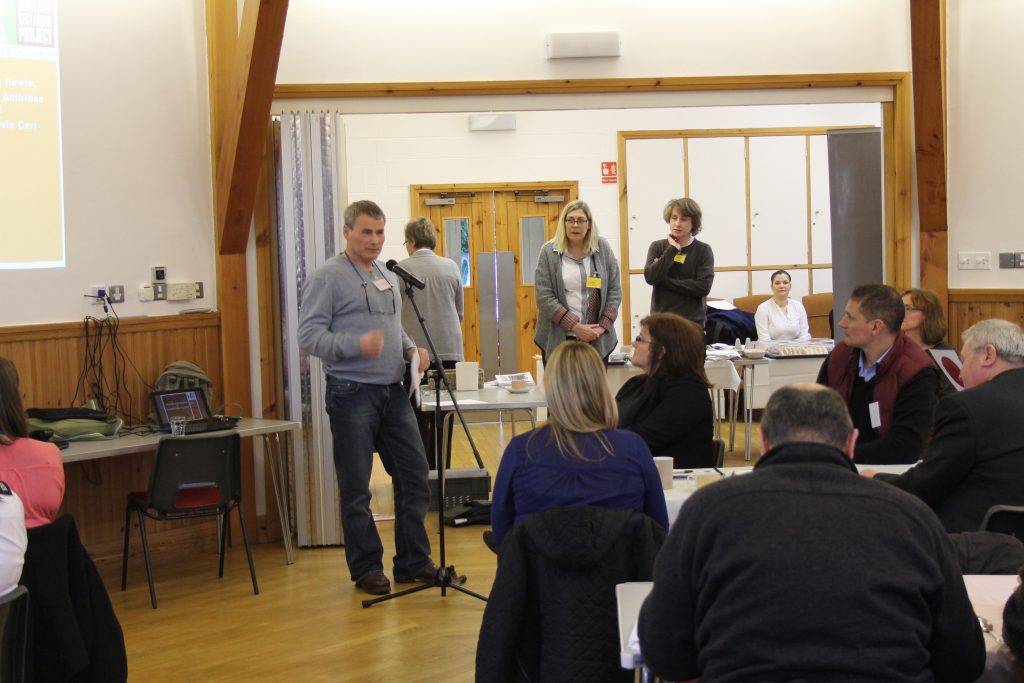 On the 28th January a new initiative to tackle inter Christian sectarianism was launched in Castle Douglas, around 50 people from across the region attended the event which was held in the Gordon Memorial Hall.

Guest speaker Des Dillon opened the event with a colourful account of his own experiences of sectarianism growing up in Coatbridge and his early working career in the east end of Glasgow. Des also spoke about how his experiences had helped him write the award winning play called “singin I’m No a Billy He’s a Tim. The play features a Rangers and Celtic fan locked up in a police cell during an old firm match and is perhaps one of the most popular works in Scotland which highlights Sectarian Culture.

Attendees of the event also heard from project workers Stevie Carr and Sid Ambrose how theatre, music, and film would play a major part in working with young people to raise awareness of sectarianism.

One innovative project will involve a national soundtrack competition, which will see musicians, young people and the University Of West Of Scotland working together to create an animated movie which is based on the idea of discredited beliefs.

Wigtownshire based project worker Sid Ambrose explained “The idea came from a hugely successful campaign in Australia where an animated soundtrack was commissioned and released on the internet to warn young people about the dangers of trains, to date it has had around 12 million views . Our intention is to emulate this success with a high quality soundtrack and animation looking at all sorts of discredited beliefs including sectarian views, we believe that this will contribute to a growing groundswell of opinion in Scotland that sectarianism is socially unacceptable.”

Marie Jackson manager of Stewartry Council of Voluntary Service added “Sectarianism has long been recognised as a threat to community harmony throughout Scotland, we are one of 43 projects being funded throughout Scotland over the next 18 months to find innovative ways to raise awareness ofand challenge sectarianism. The project launch has been very encouraging as a variety of organisations and individuals have expressed interest in and voiced support for our project.

For anyone with concerns about sectarianism or wishing to find out more can contact the South West Scotland Sectarian Project on 07864505697 where a member of the team will be happy to talk to you.