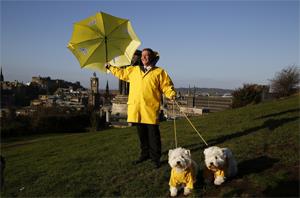 Research commissioned by the Scottish Government and the British Red Cross has found that 40 per cent of Scots surveyed said that they were concerned about emergencies caused by treacherous weather conditions, down from almost half of those questioned a year ago.

• almost nine out of ten car owners believe they are prepared for an emergency, largely because three-quarters carry an ice-scraper and de-icer.
• seven per cent had experienced an extreme weather emergency in the past year, with higher levels in rural areas. Of these, two-fifths claimed they got together with neighbours to help them cope.

“If there is anything recent winters have shown us it is that Scottish weather is unpredictable.

“In the last five years, most parts of Scotland have been affected by severe weather ranging from snow and freezing temperatures to high winds and flooding, and we also saw the terrible impact of flooding in south-west England last winter. While extreme weather can happen at any time of year, winter remains the time of greatest risk.

“The unpredictability of weather patterns means we cannot simply hope that we will miss the worst of it. While we can’t stop the weather causing disruption, we can be well prepared to cope with it.

“Our annual winter preparedness campaign reminds us of this and the simple actions we can all take to get ready: in the home, before a journey, at our place of work and in our communities. This will serve us well not just throughout the winter months, but all year round and in a range of emergency situations.

“I’m delighted the campaign is again being run in partnership with the British Red Cross and will be supported by a variety of other partners across the public, private and voluntary sectors in Scotland.”

“Making sure you are prepared now for winter can make a huge difference when extreme weather hits.

“At the Red Cross we know that severe weather, including snow and floods, can have serious consequences. However, with a few simple steps you can make yourself and others ready for the disruption it can bring.

“You can prepare an emergency kit for your home and car, jot down your emergency phone numbers and check on any neighbours, family or friends to see if they need any help. You can also make sure you know what the plan at your workplace is.

“Each year the Red Cross helps people across Scotland cope with the effects of severe weather and this winter, as always, we’ll be prepared and ready.”

“COSLA is delighted to once again be working in partnership with the Scottish Government and British Red Cross to launch the ‘Ready for Winter?’ campaign. COSLA would urge people to be aware of the simple measures they can take to make sure they are prepared should severe weather affect Scotland.

“COSLA is involved in reaching out to local councils throughout Scotland to ensure they have appropriate contingency plans in place to minimise the impact on public services should Scotland experience any form of severe weather this winter.”