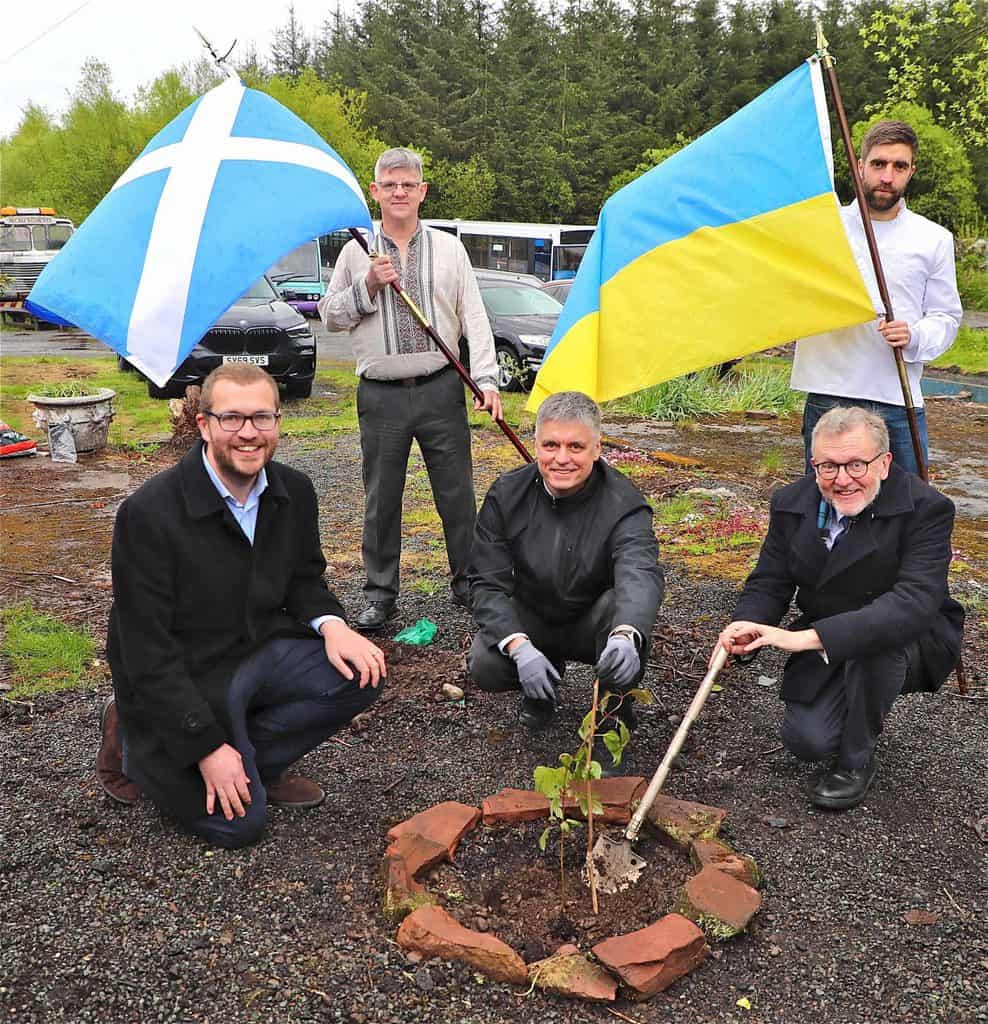 A SENIOR eastern European diplomat visited Dumfries and Galloway at the weekend on a mission to meet families with strong links to his country.

Former Ukraine Minister of Foreign Affairs, Vadym Prystaiko, current Ambassador to the UK, was fulfilling a wish to see the chapel at the one-time prisoner-of-war camp at Hallmuir, near Lockerbie.

He was joined by the Ukrainian Consul General for Scotland Natalia Ostapenko and was hosted to a traditional bread and salt reception by the volunteers who look after the Orthodox Greek Catholic place of worship.

The colourful chapel is inside an ordinary looking camp hut, which is now Grade B listed, and also features exhibits telling the story of the Ukrainians who lived there, worked in local woodlands and farms, with some eventually marrying and settling in the area.

They had become displaced during the turmoil in eastern Europe in World War Two and subsequently feared returning to their homeland as their lives were at risk from the occupying USSR forces.

Both Ambassador Prystaiko and Consul General Ostapenko were briefed by archivist Peter Kormylo, CEO of the Ukrainian Information Service, on plans to create a museum in a next door building and the diplomats expressed enthusiasm for the project.

Four native Ukrainian Kalyna Berry bushes were planted near the chapel to mark the occasion.

Many members of the community, generations born and brought up in Dumfries and Galloway, have retained much of the culture and language skills learned through their family roots in Ukraine.

On Sunday, they were joined by others with Ukrainian links from elsewhere in Scotland and England.

Whilst in the area, both diplomats took the opportunity to visit the Lockerbie Disaster Memorial and laid a wreath on behalf of the Ukrainian Government.

The local constituency parliamentarians, who have been supportive of the museum initiative, attended both events.

He said: “I know how pleased local families with connections to Ukraine are that two of the country’s senior diplomats have made this special trip to meet them.

“The way the Hallmuir camp chapel has been preserved and the plans for the future reflect great credit on all the volunteers involved.”

Dumfriesshire MSP Oliver Mundell said: “A visit to Hallmuir helps illustrate the very personal stories from the dark days of World War Two which brought the first generation of local Ukrainian residents to our area.

“The chapel’s beautiful interior is well worth a visit and has, in particular, become a focal point for families and individuals with Ukrainian connections locally, across the UK and, indeed, globally.”