Join us at Theatre Royal Dumfries on Tuesday 28th May for a variety show with a difference.

Takeover sees participants from the Dumfries Arts Award Programme (DAAP), the Junior Guild of Players and Paragon Music join forces to create what promises to be a fantastic night of entertainment.

As part of the Arts Award programme, participants have formed Arts End of Somewhere, the production group in charge of putting the programme together.

The Oz and Gingerbread Cinderella Saga is a performance co-directed and performed by participants of the Dumfries Arts Award Programme. Group Facilitator Heather Molloy says, ‘This will be the second performance this talented group have put together and I am thrilled that we will be performing at the Theatre Royal where they hold all of their rehearsals.’ The group performed previously as part of the Dreams for the Future Festival organised for the launch of Moat Brae, and such was the praise they received for their show, they couldn’t resist the temptation to tread the boards once more! 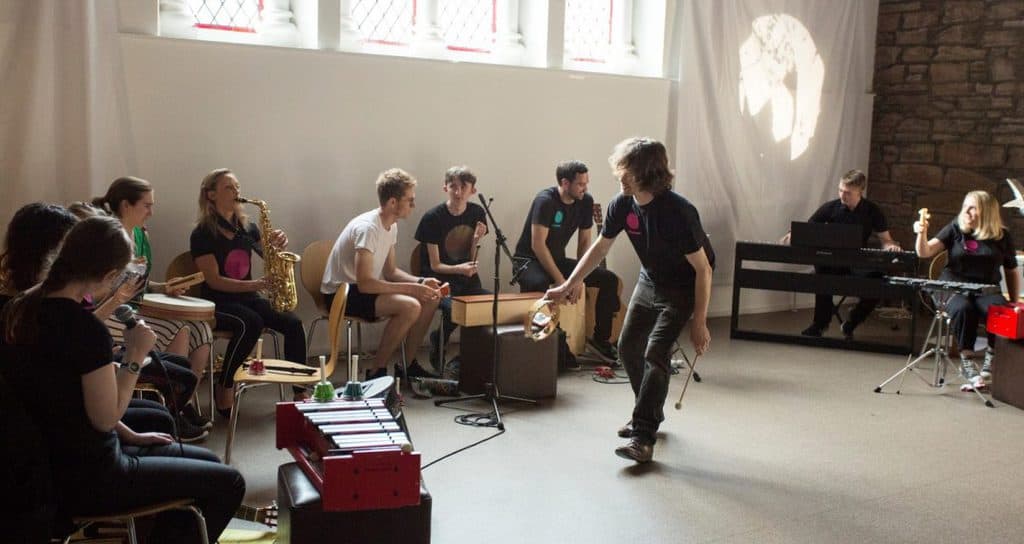 Joining the evening’s entertainment will be Paragon Music. Paragon Music is a registered Scottish Charity who engages people with additional support needs in inclusive music and arts opportunities. Paragon’s team of professional practitioners use music as a tool to increase confidence, boost aspirations and create social spaces where people can come together to enjoy themselves.

The Resonate programme of workshops run in partnership with Access Art; combining music and visual art to create and perform exciting new work. The group have been exploring what sounds might look like and vice versa; responding to rhythms with patterns and discovering how emotions can be expressed through live art and music.

Also performing on the night are members of the Junior Guild of Players as they present Bandelero the Bandit, the first ever play written by the then 17-year-old JM Barrie. The titular character, Bandelero, a bandit wrongly accused of a terrible crime, must try to escape capture, all while trying to keep his promise of marriage to the kind and beautiful Alice, who happens to be the daughter of the man who wants him killed!

Due to this plotline, the local clergyman, Rev. D. L. Scott, publicly ridiculed the play, describing it to newspapers as “grossly immoral” and claiming that it appealed only to “the irreligious, the frivolous, the giddy”. The play was then “lost” for 141 years until last year, when it was presented by members of the Junior Guild of Players from the Theatre Royal Dumfries, at “Staged!”, hosted by The Peter Pan Moat Brae Trust at Dumfries Academy.

Director, Emily Kelly, said “I think it’s so important in terms of JM Barrie’s legacy that we stage this hidden gem. It’s also just been a fantastic project to work on again, as myself and the Juniors involved have learned so much during rehearsals, as well as having lots of fun in the process!

There will also be an exhibition in the Theatre Royal Studio space, displaying different pieces of artwork created by local people, answering the question ‘What does inclusion mean to you?’ The exhibition is meant to spark conversation amongst the audience and is part of Scotland’s A Year of Conversation. Would you like to be a part of this exciting event?

Send us information about your artwork to artsendofsomewhere@gmail.com