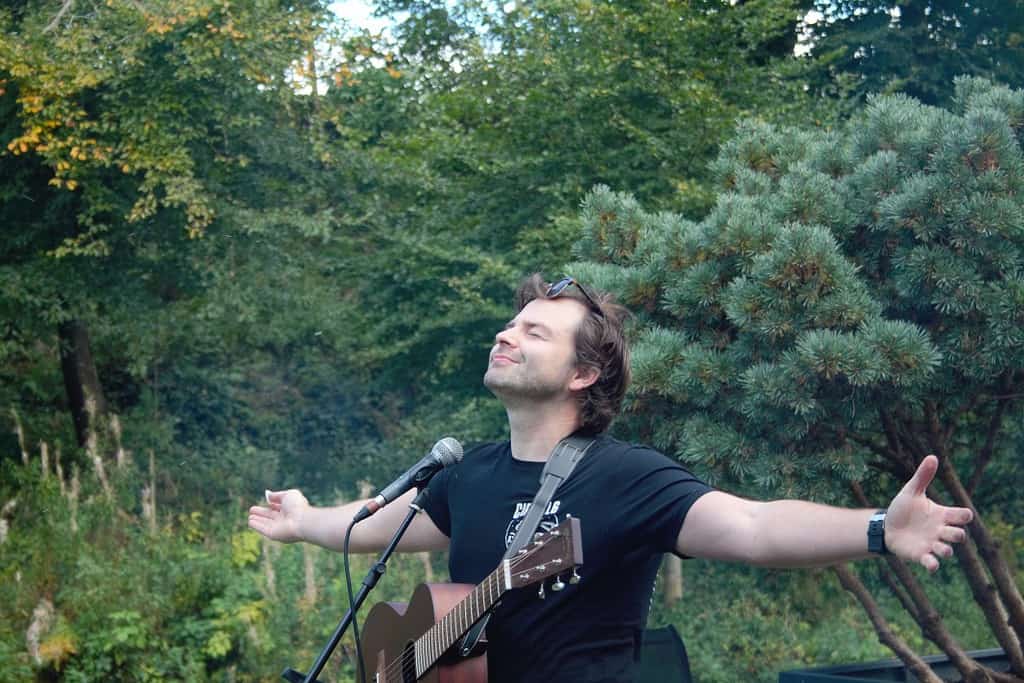 Dumfries & Galloway Arts Festival and local musician Grant Dinwoodie are working together to perform Garden Gigs & Doorstop Songs in every corner of Dumfries & Galloway, shedding light on the plight of musicians all across the UK.

The music industry in the region and throughout the UK has been left hanging in the balance due to the Coronavirus pandemic. Restrictions have been introduced that have prohibited almost every pathway to performance, leaving musicians across the country struggling and audiences desperate for their next gig fix.

Dumfries & Galloway Arts Festival put out a call for commissions back in July this year to support artists during the pandemic, allowing them to create pieces of work that responded to the theme of love as part of their Arts Live year-round performing arts programme that supports artists, venues and promoters.

The festival was inundated with proposals and Grant’s proposal stood out above all as a proposal that really spoke to the times, acknowledging the tragic loss of music industry events throughout the UK, spreading the love and giving back to Dumfries & Galloway’s communities.

Grant has decided as part of filming for the music video for his new single, to tour every corner of the region, filming in gardens and doorsteps. Supported by the Dumfries & Galloway Arts Festival, they are working in partnership to honour the missing live gig experience and bring it back to people in their very own garden or doorstep showing that no matter the situation, music and love will prevail.

Both Grant and the Dumfries & Galloway Arts Festival have taken into consideration the government guidelines that are currently stopping live gigs taking place and created a plan to ensure these events can still take place in a safe and socially distanced way. They have fought to keep this project alive ensuring that they work stringently within the restrictions in place at the time of the performance.

Many musicians see no end in sight as the ban on performing indoors has not been lifted and there looks like no plans to bring it back anytime soon. It is hoped that this small act of kindness highlighting the plight of musicians and showing that no matter how bad the situation may feel, music will bring some hope to those in need and that there is still a fight left in the industry.

Representatives of the industry have called for better support for musicians and a route map for live performances to be brought back, with some claiming artists may not return to the industry in favour of what is said to be more stable employment and with the government campaigns aired recently, they are actively being encouraged to move to other industries.

After a call out to the people of the region, it was clear audiences are also missing the live music experience as they received over 160 applications from across Dumfries & Galloway to host a garden gig. All the names were then put into a hat and then randomly chosen with 5 gigs happening in total over October. Grant has planned to do several doorstop songs along the way to each of his gigs and is also planning a very special gig for those that weren’t lucky enough to have him perform in person, with more information to be released soon.

The finished video will be aired by Dumfries & Galloway Arts Festival later this year, with a very special Q&A session that will showcase the work that Grant and the Festival put into this project to ensure that it would go ahead, even when plans were changing daily to ensure they coincided with the government restrictions.

The pandemic has hit this region and in fact the world very hard this year, with many people struggling to cope with what 2020 has thrown their way. Grant has been inundated with requests to perform to those most in need and is taking this project further and extending the application process to the end of November and perform a doorstop song to those who need it most during this time.

“I’m delighted to have been awarded a commission by Dumfries & Galloway Arts Festival to be part of their Arts Live programme. My aim is to raise awareness and to highlight the plight of the industry. We can’t currently perform in our usual way or make money like we usually would, economically many of us are struggling and it is hitting musicians hard.

I want to highlight that this was the only way I could perform, and I hope that it spreads some joy to those who have dealt with so much during this time.”

Dumfries and Galloway Arts Festival’s Autumn/Winter Arts Live programme is running until December this year with a full schedule of digital work that showcases local and national artists. Not only will the programme showcase the 9 commissions from the Love Micro-Commissions Call Out but it will feature artists from their Stage iT programme which showcases work from artists aged 14-25 who applied to the Young Love Micro Commission. Stage iT is a strand of the Dumfries & Galloway Arts Festival that is programmed by young people, for young people.