Chances of 40°C days in the UK Increasing

Towards the end of the century parts of the UK could see 40°C days every 3-4 years on average under a high emissions scenario.

A new study by Met Office Hadley Centre scientists has found that the chances of extreme high temperatures in parts of the UK could increase significantly by the end of the century. The research paper has been published in the journal Nature Communications.

The highest temperature ever recorded in the UK is 38.7°C set in Cambridge in July 2019. This prompts the question of whether exceeding 40°C is now within the possibilities of the UK climate.

The study suggests the current chance of seeing days above 40°C is extremely low, however by 2100 under a high emissions scenario the UK could see 40°C days every 3-4 years. If emissions are reduced in line with the Paris climate agreement, the future probabilities are expected to be considerably lower.

The return time for the 40°C threshold is reduced to around 15 years by 2100 under a medium-emissions scenario.

Lead author Dr Nikolaos Christidis, said “We found that the likelihood of extremely hot days in the UK has been increasing and will continue to do so during the course of the century, with the most extreme temperatures expected to be observed in the south east of England.

“Climate change has already influenced the likelihood of temperature extremes in the UK. The chances of seeing 40°C days in the UK could be as much as 10 times more likely in the current climate than under a natural climate unaffected by human influence. The likelihood of exceeding 40°C anywhere in the UK in a given year has also been rapidly increasing, and, without curbing of greenhouse gas emissions, such extremes could be taking place every few years in the climate of 2100.” 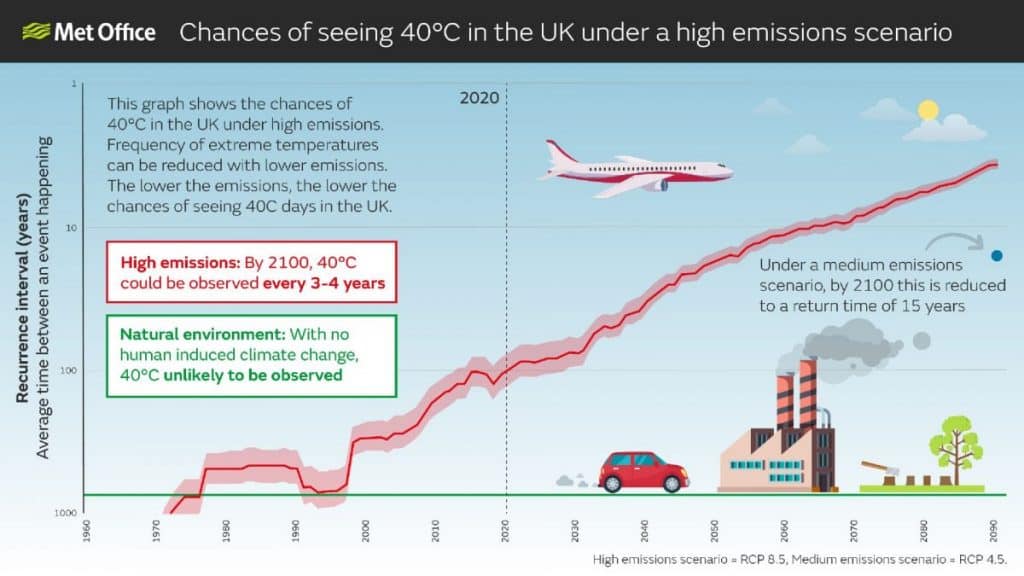 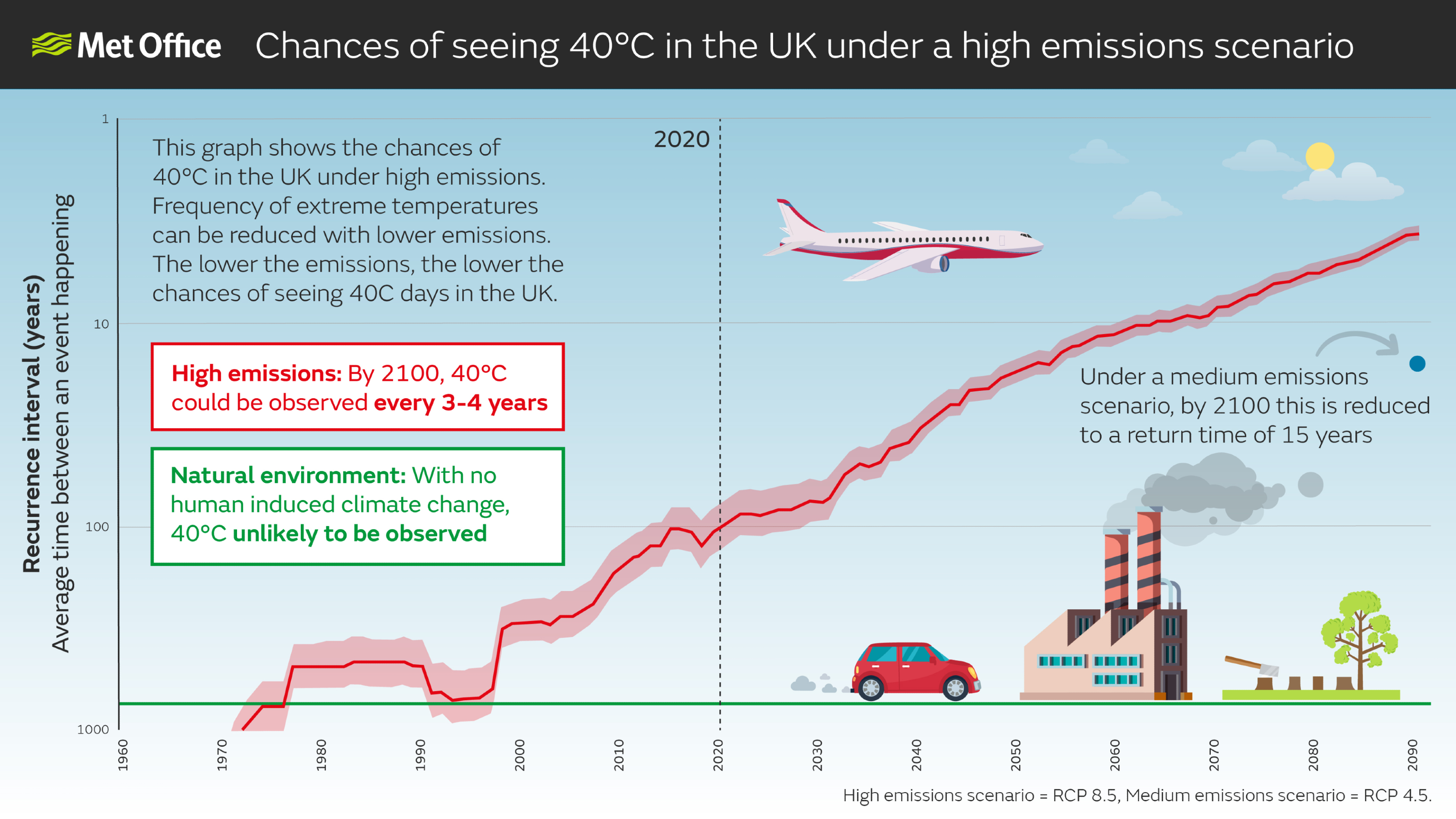 The study took advantage of the new high-resolution HadUK-Grid dataset to make more precise local predictions of future hot spells. Summers with daily maximum temperatures exceeding 35°C currently happen once every five years on average, but could happen almost every other year by 2100 under a high emissions scenario.

Co-author and head of the Met Office National Climate Information Centre Dr Mark McCarthy, said: “This research shows human-caused climate change has set us on a course to see temperature extremes in the UK that would be highly unlikely under a ‘natural’ climate, although urgent action to reduce emissions now can significantly reduce the occurrence of extreme high temperatures in the UK in the future.

“Analysis shows that in some parts of the south east between 1960 and 2019 the hottest days of the year have already increased by 1°C each decade, showing the UK is already on a warming trend when it comes to heat extremes.”

The chances of 40°C days are focused around the south east of the UK, with temperatures above 35°C becoming increasingly common in this region too. However, the study also found that by 2100 many areas in the north for which 30°C is currently extremely rare or unlikely may exceed 30°C at least once per decade.

The findings from this research are important to help plan for future extremes, informing effective adaptation and mitigation strategies to limit impacts on UK society. The outcomes are consistent with the headline findings from the UKCP18 climate projections, which show a greater chance of hotter, drier summers in the UK and that under certain emissions pathways exceedances of 40°C in the UK may become common by the end of the century.