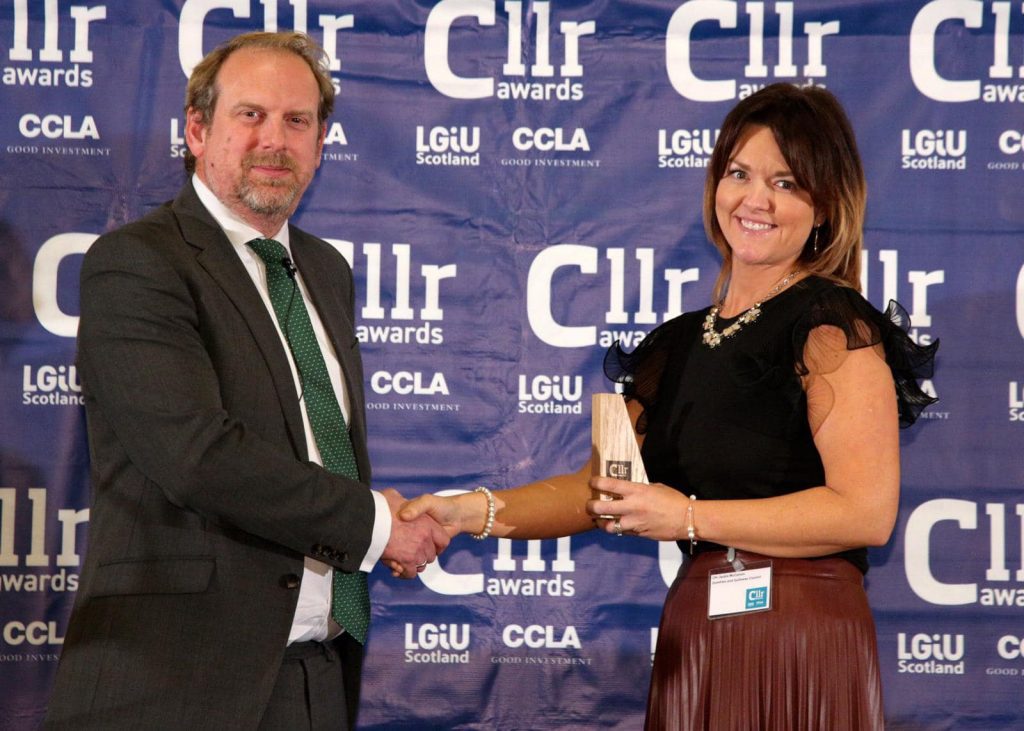 Councillor Jackie McCamon recorded one of the biggest majorities in Scotland when elected for the rural ward of Mid Galloway and Wigtown West. Now Jackie McCamon has a rather special title bestowed on her – New Councillor of the Year – after winning the coveted national honour at the LGIU Scotland & CCLA Councillor Awards.

The Dumfries and Galloway Council member – who was elected in a by-election in January last year – won the prestigious award at a ceremony held in the council chambers in Glasgow last Wednesday evening.

Jackie – who represents the area where she grew up and lived – impressed the judges with her remarkable record in helping local constituents with a host of problems during the Covid-19 pandemic.

The young mother-of-two revealed she was totally overwhelmed by the honour. She said: “I was delighted simply to be nominated and considered for the award and now I can’t believe that I have won.

“I have loved every minute of being the local councillor of an area that means so much to me. It is not just an honour to represent the people but a real privilege.

“Having grown up in the area I appreciate some of the problems many are facing especially during the pandemic which was so tough for a great number of people.”

As an outgoing and popular member of the local community, Jackie has never been slow to stand up and fight for members of the public when it comes to getting their views across to the council and its officials.

She explained: “I firmly believe that everybody’s views should be heard and listened to.  It is important that people get the chance to make their opinions known especially when it comes to local issues that ultimately affect their lives.

“I think it is important that local councillors keep in touch with the communities that they represent and keep everybody fully informed of what is happening. Social media such as Facebook and Twitter makes it that bit easier but you also need to be available in person to find out what is really going on in your constituents’ lives.

“Being a local lass helps greatly as many feel comfortable knowing that I am there to help them regardless of what their problem is. I will always do my best for them of that they can be assured of.”

Jackie – who is married to Finlay Carson MSP for Galloway and West Dumfries – decided to stand for the council not long after having her first child, while actively assisting other young mothers in the area.

The local councillor explained: “I think quite a few folk were rather amused when I started campaigning while pushing a pram with a baby in tow….but they quickly realised that I was serious and wanted to do what is best for the local community.

“I have always maintained that we must drive forward community-based agendas and keep the general public not only informed but given the chance to have their say on issues that affect them.

“More recently I have been involved in highlighting the concerns of people in Newton Stewart who are worried about the lack of progress with the  local flood prevention scheme as well as CCTV cameras in the town. These sort of things matter greatly to the local community and I am more than happy to raise it with council officials.”

Being elected during the pandemic meant that it was a steep learning curve for Jackie although she has never shied away from the challenge – something recognised by her constituents.

She added: “It was tough at the beginning because everybody had their lives put on hold and were naturally worried about shielding and being able to pay the bills.

“Hopefully now we can begin to look forward and rebuild our communities again which is vital in the likes of Dumfries and Galloway if we are to benefit fully and enjoy our lives.”

Jackie – whose hobbies include bee-keeping – remains adamant that she will not be resting on her laurels after picking up the top honour. She revealed: “There is little chance of that happening as there is still plenty of work to be done to ensure everyone is kept happy.”